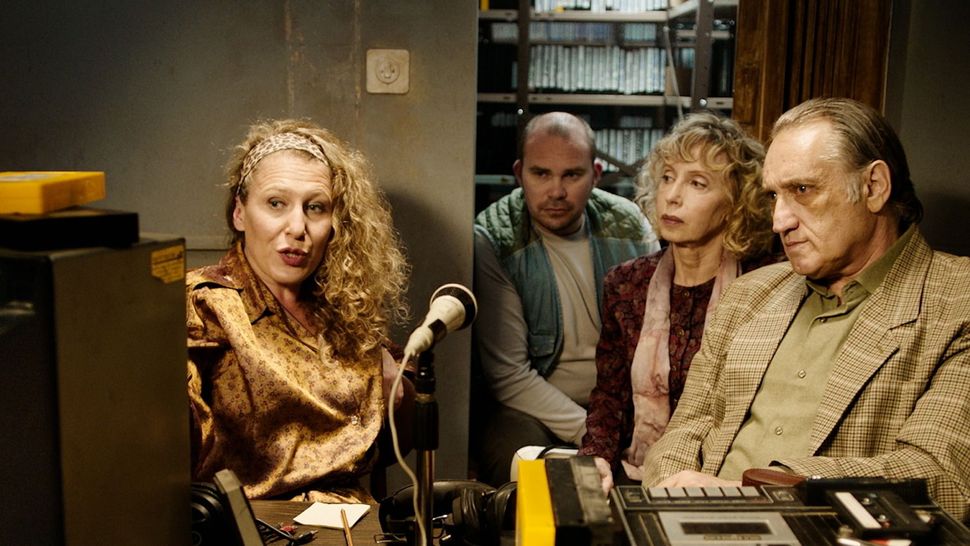 When the Iron Curtain fell and Soviet refuseniks were finally allowed to settle in Israel, many found some novel worries, and some familiar ones, waiting on the other side.

While they looked for work, these Jews found themselves navigating a new country and a new language. But, amid the stress of assimilation they still had needs, among them sex and art.

“Golden Voices,” a film by Evgeny Ruman, follows a newly-arrived 60-something couple, Victor (Vladimir Friedman) and Raya (Maria Belkin), who arrive in the fall of 1990. In the USSR the pair worked as voice-over artists, dubbing classics like “Spartacus” and “On the Waterfront.” In Israel, they’ve been reduced to living in a crummy apartment and taking Hebrew lessons.

They had been hopeful they could produce radio plays for immigrants like themselves, but the best Victor has been able to do is to record an air-raid siren announcement (gratis). Raya has a bit more luck; she gets a job as a phone sex operator under the name “Margarita.”

Starting on a tarmac, where suspicious passengers are handed tiny Israeli flags, the film provides an interesting survey of a community scrambling to develop its own infrastructure. The Russophone sex hotline serves the many Igors and Sergeis lonely in their new environs. Victor, committed to working on films by auteurs like Fellini, briefly finds work at a video store where his fellow immigrants buy pirated American movies dubbed in Russian, many containing nude scenes. (He later laments the lack of Soviet censorship.)

The true focus of the film is Raya and Victor’s relationship, whose prior challenges are thrown into relief with his creative frustration and her subterfuge about the nature of her work. On one side are Victor’s artistic airs — and his lack of a cinematic mouthpiece — on the other is sex work, which Raya finds oddly fulfilling as an escape from her marriage.

Anchored by Friedman and Belkin’s affecting performances, the film doesn’t often stumble, though its attentions are split. The problems the couple brought with them contend with farcical elements like Victor’s misadventures in film bootlegging or Raya’s early (or shall I say premature) success with her clients. And while its attention to plot is almost casual, one job or plotline dropped for the next, its pivotal moments play out in on-the-nose dialogue.

“I wanted my life to be an entire world,” Raya says, paraphrasing Victor’s lofty explanation of dubbing work. “I wanted to be the main character, but… I’m not even a supporting one. I’m just… a voice in the background.”

Despite her protestations, Raya does play a major role in this film, but the background noise of the early ‘90s, with its Saddam Hussein-inspired paranoia, does occasionally drown her out.

In cramming a character study into a time capsule, “Golden Voices” ends up a bit confused in its mission. Portentous text at the beginning, explaining the mass immigration we’re seeing onscreen, soon gives way to familiar — if perhaps well-drawn — stereotypes and an O. Henry-esque ending involving a gift of gas masks. The larger conversation surrounding high art and the proximately pornographic is abandoned almost entirely.

Still, there’s no denying the joy of seeing Friedman do Russian Dustin Hoffman in “Kramer Vs. Kramer” or watching Raya find her voice as a “22-year-old virgin.” It’s worth seeing in a theater. And I wouldn’t wait for a dubbed version.