New, bizarre (and sometimes gross) ‘Data’ about the Jewishness of ‘Star Trek’ 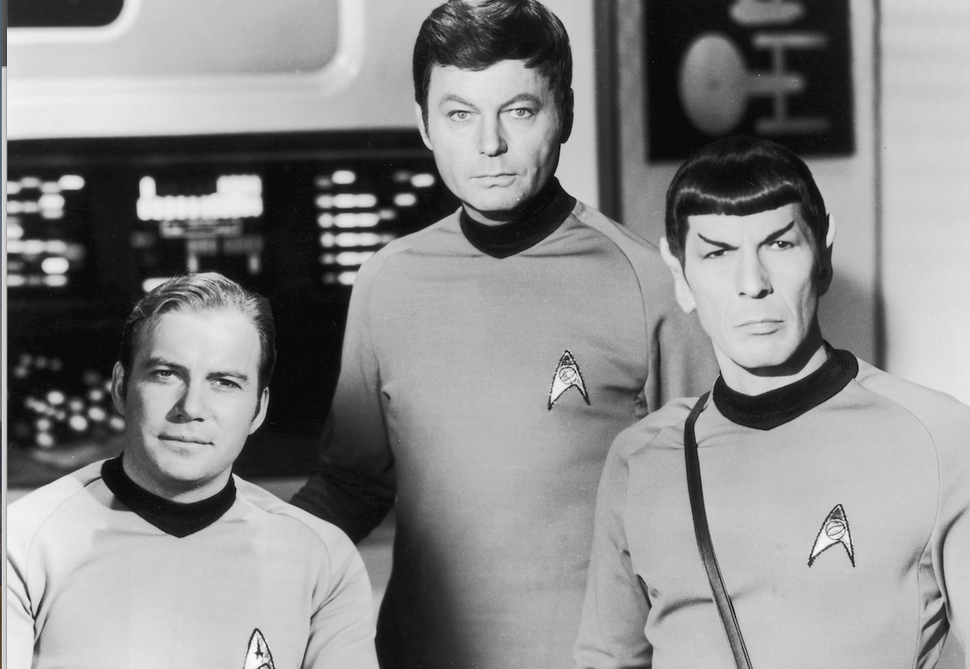 The cast of the original ‘Star Trek’ By Getty Images

A Mem-Noir: Inspired by True Events

What is it with “Star Trek and the Jews?” Leonard Nimoy imbued Mr. Spock with Jewishness from his Orthodox upbringing and William Shatner went to Jewish summer camp. Some people, wrongly, think that Gene Roddenberry, creator of “Star Trek,” was also Jewish, but his two initial co-writers, Bob Justman and Herb Solow, were.

Second — more worryingly because of the similarity to enduring antisemitic stereotypes — Jewish actors Armin Shimerman, Aron Eisenberg and Max Grodénchik played the greedy über-capitalist Ferengi characters Quark, Nog and Rom, respectively, on “Star Trek: Deep Space 9.” Shimerman himself played three separate Ferengi on three separate series, as well as DS9, he played Quark on “Star Trek: Voyager” and, before that, played Letek and then DaiMon Bractor in separate episodes of “Star Trek: The Next Generation.”

Finally, as I just learned from reading “Fan Fiction” — the new sort-of autobiographical novel by Brent Spiner — both hyperlogical pillars of “Star Trek” — Mr. Spock and Data — were played by members of the tribe.

The hero of Spiner’s novel is an actor called Brent Spiner who is in the midst of filming the third series of “Star Trek: The Next Generation” in 1989 when a dangerous stalking fan sends him a bloody pig penis in the mail.

The protagonist, like the author, was close friends with Donald “Trey” Yearnsley Wilson III who tragically died in the middle of that year. Both real and fictional Spiners are from Houston and Jewish enough that their heritage is mentioned on multiple occasions in the novel. The treyfness of the disgusting fanmail isn’t addressed directly, but it adds piquancy to the story.

Shortly after the arrival of the first of a number of threatening letters and odd, “Star Trek”-adjacent events, Spiner is getting into his makeup next to Michael Dorn – who stars as Worf.

The “great artist Michael Westmore,” Spiner writes. “proceeds to pack a pound of phosphorescent powder onto my punim… I doubt it’s much of a thrill for him to turn a Texas Jew into an android from Omicron Theta, but I get goose bumps every day just being part of his history.”

Later on, inspired by a TV movie and high on Percodan (matzo ball soup did end up curing the kidney stone, though prescription medication helped out with the pain), Spiner faces up to his stalker and the memories of his bullying stepfather. He imagines ghosts of Christmas arriving, including Patrick Stewart, his friend from “The Next Generation,” as the Ghost of Christmas Present.

Stewart teaches Spiner about empathy and they get into a discussion:

”That’s from First Corinthians, isn’t it? You know I’m Jewish, don’t you?”

”Then let me put it another way. Grow some ‘beytsim,’ as they say in Yiddish.”

So, though the extent of the gap between the fictional and the historical Spiner is unclear, Spiner joins Kinky Friedman and David Wilensky in my top three living Jewish Texans, when he recounts how he lost his virginity by engaging the services of a prostitute called “Little Tinker Toy.”

“[She] looked me right in the eyes and said ‘Kid, if you’ve got 10 dollars, I’ve got the keys to the kingdom of heaven,” Spiner writes.

Although he notes that “if memory serves… [she] bore an uncanny resemblance to Ed McMahon” he pays for an evening (“in and out the door in 15 minutes”) of love. “Since I had the rest of my bar mitzvah money in my pocket, I went another couple of rounds in the Tinker Toy School of Love. She was amazing.”

As well as an introduction to carnal pleasures — the “kingdom of heaven” — Tinker Toy gave Spiner a hint as to his future profession. “Star Trek” may not have handed him the whole kingdom, but it certainly gave him the keys to the heavens.

New, bizarre (and sometimes gross) ‘Data’ about the Jewishness of ‘Star Trek’