How Paul Auster writes doorstopper novels without touching a computer 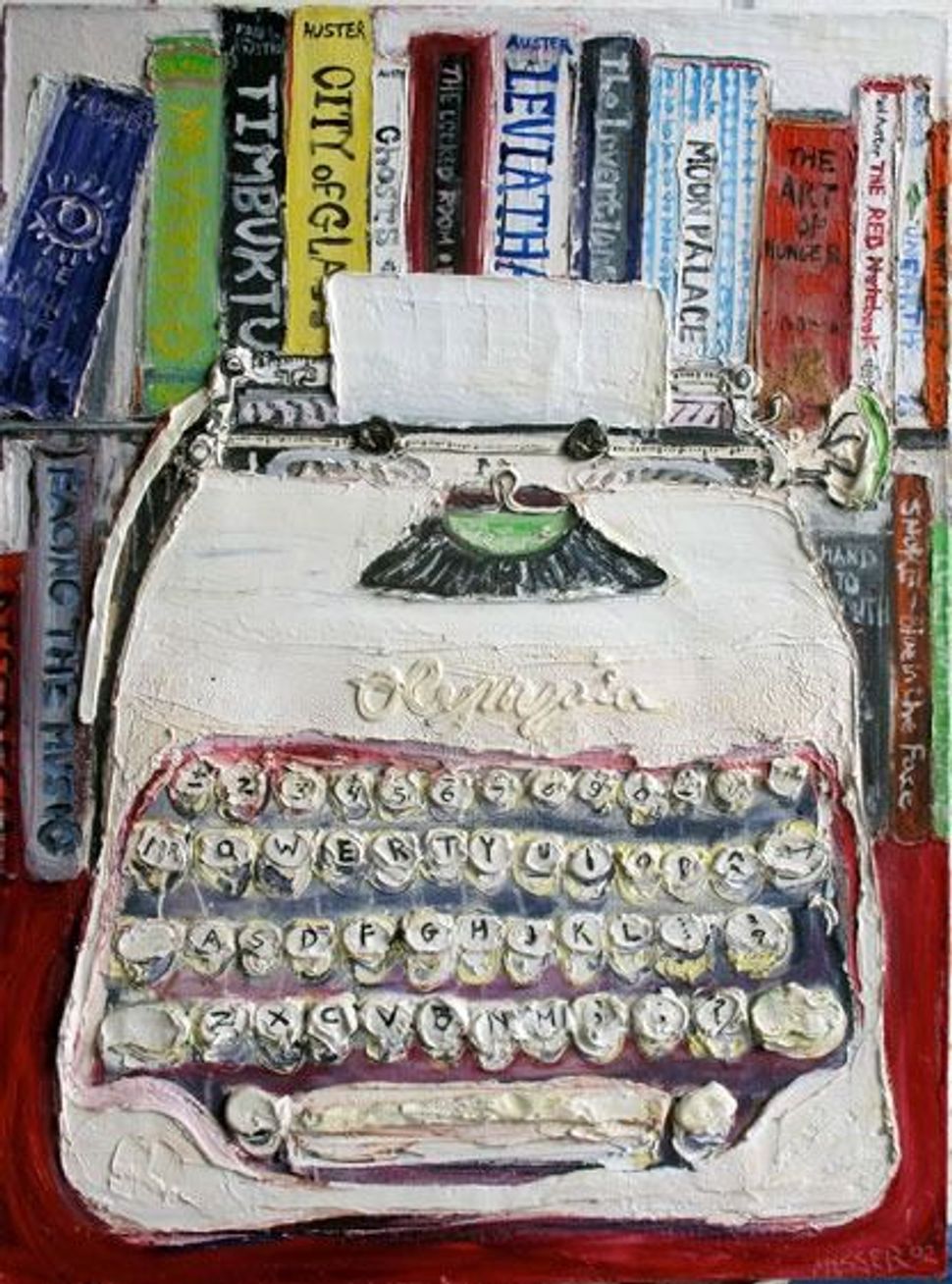 A painting of Paul Auster’s office by the artist Sam Messer, with whom Auster wrote “The Story of My Typewriter,” a book about his favorite writing implement. Image by Sam Messer

This interview originally ran in the Forward’s books newsletter. To sign up for a monthly tour of the Jewish literary landscape, click here.

When I asked Paul Auster what drew him to 19th-century author Stephen Crane, the subject of the literary biography he’s been writing for several years, he put the answer in personal terms.

“You’re 26,” he pointed out in a recent interview by phone. “He lived only two years more than you. And he published over 3,000 pages of printed work.”

It’s true. I have not published 3,000 pages of anything. And though Crane died of tuberculosis before his 30th birthday, the works he left behind — the pathbreaking novels “The Red Badge of Courage” and “Maggie: A Girl of the Streets,” countless essays and newspaper stories, and some of the oddest and most innovative short fiction of his time — formed an oeuvre many older writers might envy.

That includes Paul Auster. “At 28, I had published a couple books of poetry and that was it,” he said. “I was just clearing my throat. And Crane was dead. It’s hard to get your mind around.”

Decades after encountering “The Red Badge of Courage” as a teenager, Auster returned to Crane’s work while winding down from his latest novel, “4 3 2 1.” He became convinced that Crane was one of the liveliest writers in American history. He was fascinated by Crane’s tumultuous life, which included stints as a war correspondent in Cuba, a brave defense of a sex worker in a hostile New York courtroom and some spectacularly mismanaged love affairs. And he wondered why the 19th-century wunderkind, a celebrity in his own time, had been relegated to stuffy high school curricula in ours.

In typical fashion for Auster, whose books can rarely be described as “slim,” that little appreciation turned out to be a 738 page biography of Crane. From his Brooklyn brownstone, Auster spoke to me about his new book, writing by hand and the seven (yes, seven) essential works for anyone who wants to understand Crane. The following excerpts from our conversation have been edited for length and clarity. 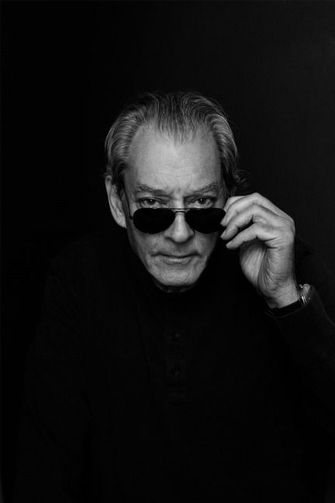 His daily routine: I get up pretty early, around 6 a.m. I stagger downstairs, make a pot of tea, read the newspaper and sort of absorb the horrors of the day. Then I go down another flight into the little downstairs room where I work, and I just start working. I usually go until noon, and then I take a break. Sometimes I take a walk, sometimes I make a little sandwich, or sometimes I go to a diner to get some fresh air. Then I work through the afternoon. Often, the things I’ve been struggling with in the morning get cleared up by the afternoon.

What he needs at his desk: I have shelves of encyclopedias, foreign dictionaries, and all the reference books I use. And I must have five or six English dictionaries of various sizes and editions. I even have slang dictionaries. When I’m really stuck I look at a thesaurus, but it never helps me. I know all those words, but I always think, “Well, there’s one word I’m not remembering that would be better than the one I’m stuck on.”

How long a page takes: I work paragraph by paragraph. So I rewrite it, and I rewrite it, and I rewrite it until I can barely read it anymore. There’s so many cross outs and changes. And then after an hour or two or four, I swivel around and type it up on my manual typewriter. Then it’s all clean on the page for me, and I make further corrections. When I feel I can’t do any more with the paragraph, I go back to the notebook and write the next.

How he unwinds: At the end of the day I am physically and mentally exhausted, so I can barely do anything in the evenings. I throw myself on the sofa and watch baseball games or old movies. My wife, Siri Hustvedt, is also a writer, and she works just as hard as I do, if not harder. The two of us are zombies at night. 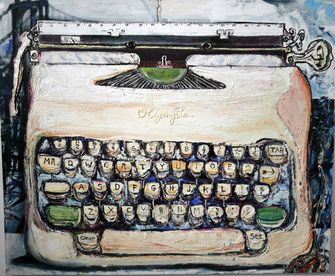 A painting of Paul Auster’s office by the artist Sam Messer, with whom Auster wrote “The Story of My Typewriter,” a book about his favorite writing implement. Image by Sam Messer

On living with another writer: She shows me everything she writes. I show her everything I write. We are great fans of each other’s work, and we want the other’s book to be as good as it can possibly be. So we’re very honest. We don’t just pat each other on the back when we feel there’s something that needs to be looked at. In all these 40 years, whenever Siri has said, “I’m not sure about that paragraph,” my first reaction is to say, “No, you’re wrong.” But then I think about it for a moment and realize she’s always right.

On first reading “The Red Badge of Courage” in high school: What I remember is the style. We talked a lot about that famous sentence: “The red sun was pasted in the sky like a wafer.” Everyone was thunderstruck by the power and beauty of that sentence, and we understood that we were in the presence of great art, and there was a kind of odd hush. And it wasn’t just boys who liked this, it was everybody. It was as if a door had opened, and you suddenly understand what great writing can do. It transforms your experience of the world.

How he came back to Crane as an adult: After I finished “4321,” I was really, truly, utterly exhausted. I remember the last day working on the manuscript, I wrote the last sentence and stood up and nearly fell on the floor. So I decided to take a break from writing for several months. I started reading books that I’d never gotten around to, and Crane was there on my shelf. I hadn’t looked at him for decades. I opened up my little Viking portable edition and read “The Monster,” and I was bowled over by it. I couldn’t believe that I’d missed it and I’d never heard anyone talk about it. It’s a little masterpiece. I read everything in that collection and I understood that I had missed out on one of the great American writers. So I graduated to the Library of America edition, which has about 1400 pages, and then I graduated to the “Collected Works,” which is ten volumes.

The most surprising parts about Crane’s life: Essentially, he was a kind, thoughtful, good person. And then there are these moments of surprising cruelty and selfishness that are always a jolt. But that’s just part of the complexity; you have to make a place for that and try to understand it as well.

Where Crane novices should start: I think his work emanates out of six central texts. “The Red Badge of Courage” is one. “Maggie: A Girl of the Streets” is another. Then you have the short stories “The Monster,” “The Open Boat,” “The Blue Hotel” and “The Bride Comes to Yellow Sky.” If you read those six, you’ll get a good sense of the range and importance of Crane as a writer.

How Paul Auster writes doorstopper novels without touching a computer