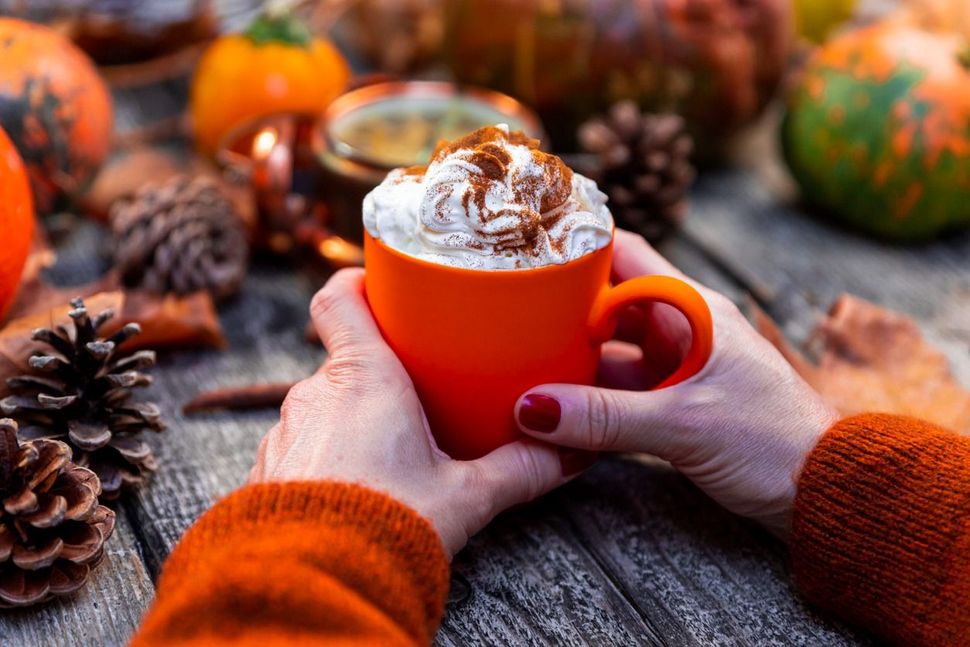 If hot girl summer is all about living large, wearing little and doing whatever you want, Christian Girl Autumn is the inverse; it’s all about chunky sweaters, big scarves and carefully coiffed curls.

I, too, love autumn; I’m a Libra, and this is my season. I’ve had pumpkin pie instead of cake for my birthday since I was old enough to verbalize my preferences and I used to make all of my friends rake leaves with me for fun. I like big sweaters and apple picking, and though I do not own a curling iron, my hair is naturally a little curly.

I am not, however, Christian. And Jewish girl autumn definitely doesn’t have quite the same ring.

Emily Burack at Hey Alma suggested Nora Ephron Autumn, with the theory that Ephron’s movies have a similar emphasis on chunky knits and cozy beds, but they didn’t have Starbucks in the era of “Sleepless in Seattle” so it seems rather out of date. Sukkot makes for an amazing autumn look if you decorate your sukkah right, but it’s too short-lived, and it was too early this year. Shtreimels and black hats are finally seasonally appropriate, but not all Jews wear them.

Christian Girl Autumn was a joke when it was coined in 2019 by @bimbofication, responding to hot girl summer and poking fun at a certain, stereotypically basic, Instagram aesthetic — pictures of boots in fallen leaves, hands cupping lattes, women at a pumpkin patch. The point was critical, contrasting the conservatism, whiteness and anti-LGBTQ stances of many Christian lifestyle influencers with the indulgence and acceptance of hot girl summer as preached by Megan Thee Stallion.

But in 2021, the term is being embraced. Caitlin Covington — the influencer whose fall photos were used in the original meme to epitomize Christian Girl Autumn — turned out to be neither conservative nor anti-LGBTQ, even posting a fundraiser for the meme’s creator to get gender affirming treatments and donating $500 to it. As a result, people began embracing the term and the style. Especially as the pandemic hit, it flipped from a criticism of basic-ness to an embrace. People are no longer so cynical about where we should derive our comfort; why not from a pumpkin spice latte?

The reason for the season ? pic.twitter.com/nDHoxOos3k

Yet the judgment hasn’t totally disappeared. In Bo Burnham’s wildly popular 2021 comedy special, “Inside,” one of the songs, “White Woman’s Instagram,” pointedly spoofs the aesthetic. One verse about “Latte foam art, tiny pumpkins / Fuzzy, comfy socks” is followed by others explicitly pointing out the meaningless consumerism behind the predictable, staged posts: “Incredibly derivative political street art / A dreamcatcher bought from Urban Outfitters.” Each chorus wonders: “Is this heaven? Or am I looking at a white woman, a white woman’s Instagram.”

There’s been criticism in recent years of terms such as “basic” or the hate often directed toward women who love pumpkin spice flavored treats, with some writers arguing that this insult is based in misogyny and revolves around a tendency to term things women love as tasteless or lowbrow simply because they are loved by women.

Perhaps an attempt to reclaim the idea of women’s tastes is part of the resurgence of the term on social media. This fall, trans women, people of color and others who are far from the original targets of the meme are proudly captioning their fall fit pics with “Christian Girl Autumn.”

I’ll still probably never use that caption; it feels uncomfortable as a Jew, and I certainly don’t want to go for Judeo-Christian Girl Autumn — that’s not a good term. But I am happy to be part of the movement of pumpkin-flavored foods and wool socks without worrying it makes me look less-than. And in any case, I know my “Christian Girl Autumn” can’t be basic — because it isn’t Christian.