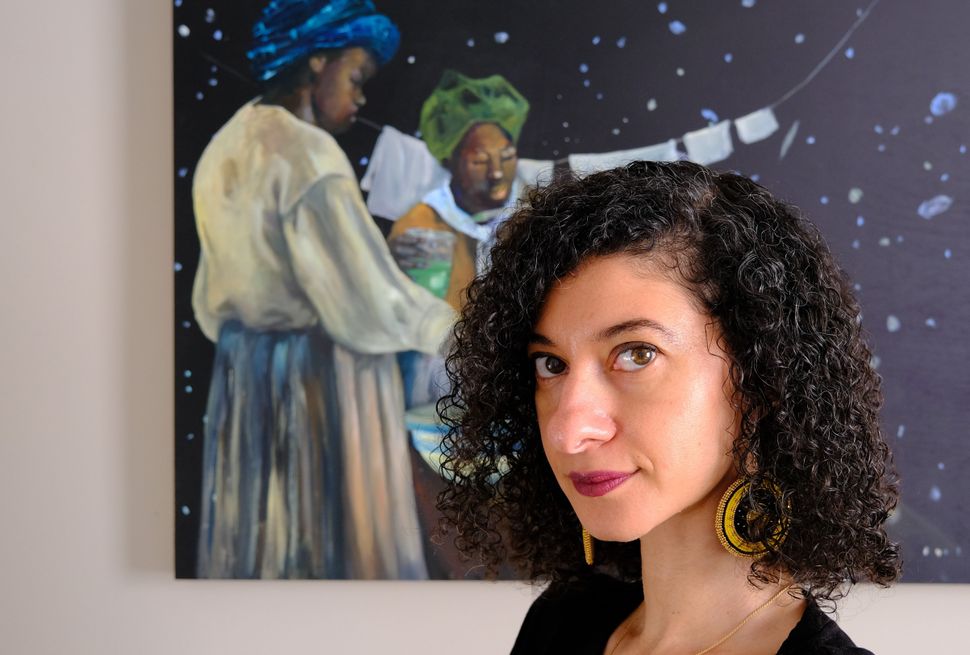 The key to understanding the universe scientifically is questioning everything you think you know — which also happens to be one of the fundamental tenets of Judaism.

That’s the conclusion Chanda Prescod-Weinstein reaches with her book, “The Disordered Cosmos: A Journey into Dark Matter, Spacetime, and Dreams Deferred.” Describing her work as living “at the intersection of particle physics and astrophysics,” she is an assistant professor of physics and also a core faculty member in Women’s Studies at the University of New Hampshire.

Everything and everyone has an origin story, and Prescod-Weinstein’s begins with her upbringing in East Los Angeles. That identity also includes being a citizen of both the United States and Barbados, a descendant of Afro-Caribbean and Ashkenazi Jews, the 54th Black American woman to earn a Ph.D. from a department of physics, and a Dodgers fan.

She spoke about her work with Forward Editor-at-Large Robin Washington, who counts as a career highlight his long-ago interview with astrophysicist Frank Drake, a collaborator with the late Carl Sagan. That conversation may or may not have prepared Washington to speak with Prescod-Weinstein.

Robin Washington: I should probably talk to astrophysicists more frequently than once every 35 years. In your book, you talk a lot about quarks. Frank Drake didn’t say a word about them when I interviewed him in 1986.

Chanda Prescod-Weinstein: Yes. They were infants back then and not too interesting to astronomers, who usually concern themselves with bigger objects. Plus, particle physicists still hadn’t even found the top quark yet. The Higgs boson was also still a hypothetical particle. Actually, next year we’ll be celebrating the 10-year anniversary of the Higgs.

We’ll spare their scientific descriptions for now. But the reason I bring it up is there was one area that left me unsatisfied. That was the Big Bang. I challenged Drake on the science behind the estimate of when it occurred. He answered that all indications are that the universe started about 14 billion years ago. Yet I was taught that the word “universe” meant all there ever was or will be, which is infinite. The Big Bang always seemed creationist to me. Is there a beginning?

The universe has this origin story and origin stories are also such a religious thing among people.

I like this question. And I hate this question. The universe has this origin story and origin stories are also such a religious thing among people. The bigger question is are you sure you’re doing science and not just doing religion with equations?

I think that the reason we have origin stories is because we as people experience the arrow of time as going forward, beginning with people being born. That’s a scientific process. The part where religion comes in is when people start to come up with explanations for why there’s an origin story.

When you interviewed Drake, I’m not sure cosmic inflation — the exponential expansion of space beginning at a tiny fraction of a second after the Big Bang — was understood the way that it is now. I talk in the book about the idea of eternal inflation; that maybe inflation has always been happening and always will be happening.

Part of this may be our concept of time. Without time we wouldn’t exist, in the sense that our bodies wouldn’t work because the chemical reactions inside them are time-dependent and our cells wouldn’t know how to talk to each other. But maybe our sensations are based on being in a three-dimensional world and we’re trying to perceive a four, five, or six-dimensional universe. We’re not wired for it, just as a two-dimensional being can’t perceive a cube.

We shouldn’t worry about it. I have this young undergraduate who’s really bright but she apologizes too frequently. One of the things she recently apologized about was not being able to visualize four dimensions.

We do have a sense of the four-dimensional world. Like my backyard doesn’t look the same in the evening as it did this morning. The light is different. I know that intuitively. I don’t think that necessarily means that you can start seeing the world the way it looks to an electron that’s moving close to the speed of light, but I think that we were starting to ask do we live in three dimensions or do we live in four dimensions? Or as we call it in physics, 3 plus 1.

Back to how quickly science changes. When I was a boy, they were still teaching us that atoms were little solar systems, which is the Bohr model. By the end of grammar school or maybe it was high school, I remember being told, “Oh by the way, the Bohr model really isn’t right. It’s more like an electron cloud,” which is a fuzzy entity that has positive and negative charges in it. I use the electron cloud model to teach about race, by the way.

…which is to say that race is not at all definitive and concrete, but fuzzy. Just as electrons aren’t flying around in neat little orbits, Black people don’t all share the same physical characteristics, and some white people may be darker than many Blacks.

This is completely tangential, but it’s very clear that right now people are really struggling with trying to contain blackness in a box. In the Black community, there is kind of new discourse around adjudicating who does and doesn’t fit in. People have started rumors that I’m lying about being Black and that I’m Blackfishing.

I never heard that term before! But I know exactly what it means: Rachel Dolezal!

I’m a weird person to pick on because my mother (Margaret Prescod) is a public figure and a well-known Black person. I’ve even been on her radio show, identified as her daughter.

That leads to the cultural aspect of physics, which is a theme in your book. Physics doesn’t care what we know or how we perceive it. The properties exist regardless of when we learn about them or whether we’re right or wrong. Does it matter then how a group of white male Europeans wants to define things?

I want to push back against the mystification of the theoretical physicist. Margaret Wertheim, in her book “Pythagoras’ Trousers,” describes how physics descends from the priesthood and the church, so that it operates like an old boys club.

You include a chapter about sexual assault against you, which you prefaced immediately by saying you know the reader is probably shocked to see it. So how does it fit in?

The chapter was not a chapter I was planning to include. It was one I ended up writing by accident in the middle of writing a chapter that actually ended up not being in it.

With my experience of having to explain to people, yes, you can be Black and Ashkenazi at the same time, I’m used to also saying yes, the universe is different than you thought it was.

I was writing a book that was giving a holistic look at how physics is done: what the math looks like, what are the words we use, what are the ideas we’re grappling with. I also was intent on including the social phenomena that shape our community, with an emphasis on race and gender. In 2021, to put a book like that out and not address sexual misconduct when there are so many people in science, particularly women, who have experienced it in scientific settings just didn’t make sense.

The other thing was friends of mine sat me down and said, “We know that you’re worried about younger people reading this book.” But one reminded me that she was already an assault victim by the time she was 12, and reading Toni Morrison’s “The Bluest Eye” helped her have a vocabulary for what had happened to her. So she said my book might be able to do that for somebody else.

Is there a Jewish angle to the book?

The interesting thing is realizing how Jewish the book is in ways I didn’t see until I finished writing it. It’s in the way that I’m asking questions about things, and saying we should ask why about everything.

That’s fundamentally what Judaism is all about. And it’s funny I said “fundamentally” because you’re looking for fundamental particles.

Yes. The fundamental component of the Jewish community is questioning. As a Black Jew, I see the traditional rules differently, and I feel more ready to challenge them because my entire existence is challenging to the Jewish community sometimes. With my experience of having to explain to people, yes, you can be Black and Ashkenazi at the same time, I’m used to also saying yes, the universe is different than you thought it was.