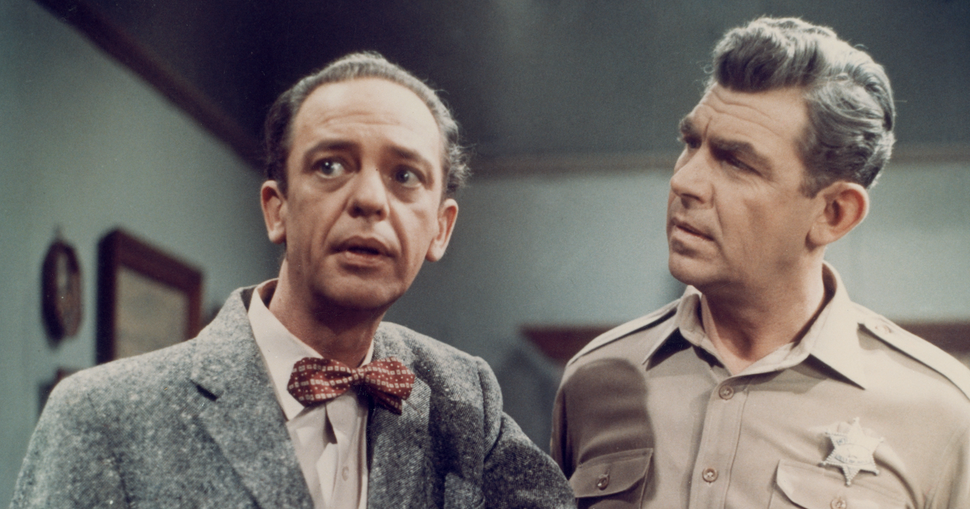 Before he was the iconic sheriff of fictional Mayberry, the bumbling Air Force recruit in “No Time For Sergeants” or even the deranged drifter in “A Face In the Crowd,” Andy Griffith started out as a comic dialect monologist. He told colorful and droll country tales ladled out in his mellifluous “molasses in January,” North Carolina drawl.

In 1953, Griffith (calling himself “Deacon” Andy Griffith) recorded “What It Was, Was Football,” a novelty 78 for the indie North Carolina Colonial label about a man who is heading to a tent meeting but is unwillingly borne along by a large crowd heading to a football game, something he had never seen and cannot comprehend; he leaves before the game is over. 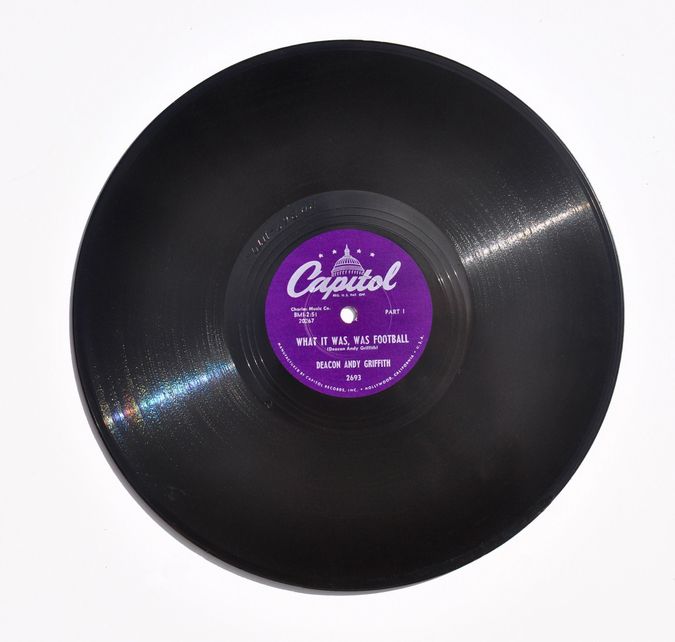 Deacon Griffith: The future star of ‘The Andy Griffith Show’ sold three-quarters of a million copies of ‘What It Was, Was Football;’ for Capitol Records. By Getty Images

Fifty-thousand copies later, Capitol Records nabbed the rights (“Hillbilly Gridder Disk Grabbed by Cap” was how Variety reported it on September 16, 1953). It quickly sold over three-quarters of a million copies.

The record got Griffith a featured spot on “The Ed Sullivan Show” and a slew of offers from Broadway, movies and TV. It is not too much to say that this recorded skit launched the career of Andy Griffith.

Though “What It Was, Was Football” is widely assumed to be Griffith’s own creation, in several interviews he noted that he was improvising on an old vaudeville routine.

Six years before Griffith’s record, another indie novelty 78 was released. It followed the same storyline, but the character was not en route to his church’s rural tent meeting; he was on a subway in the Bronx.

And the routine was in Yiddish.

The 1947 disc, “Getzel at a Football Game,” was recorded by Yiddish performer Michel Rosenberg (1901-1972). Born in Warsaw, Rosenberg was a founding member of Maurice Schwartz’s illustrious Yiddish Art Theater and an evergreen presence of the Yiddish theater community thanks to his amazing range; he had a seemingly limitless array of dialects, characters and voices. 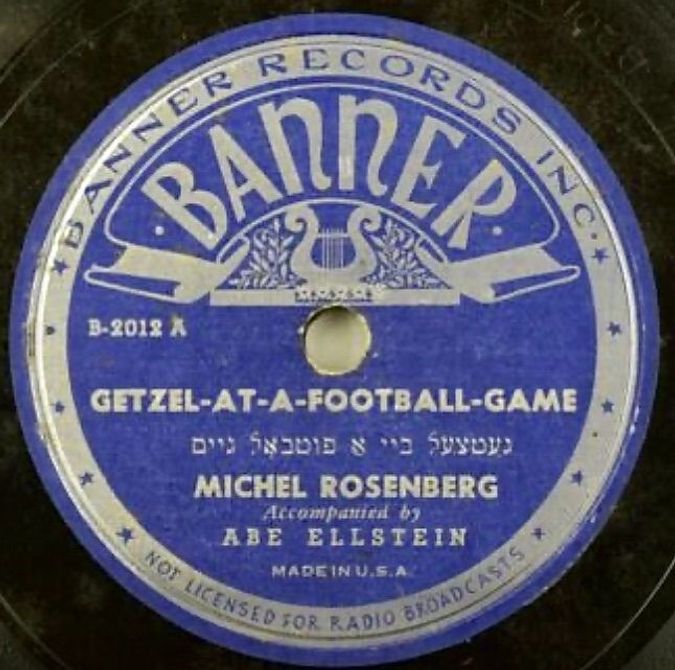 In addition to his stage work, Rosenberg made a baker’s dozen of films from the 1931 bedroom farce, “Zayn Vayb’s Lubovnik/His Wife’s Lover” to the 1932 drama “Uncle Moses” (with his old boss Maurice Schwartz) and the Ed Wood-esque 1950 musical “Monticello, Here We Come.” Rosenberg also appeared on the musical-variety radio show “The American Jewish Caravan of Stars” and on TV as “Muttel” in the 1954 season of “The Goldbergs.”

New Jewish labels included Jubilee, Apollo, Laff and Sun. In late 1946, Banner Records was formed, and, thanks to the label’s musical director, Yiddish theater composer Abe Ellstein, Banner cornered the market on the reigning crème de-la-crème of Yiddish performing veterans: Michel Rosenberg, Moishe Oysher, Molly Picon, Maurice Schwartz, Myron Cohen and a dozen more (Out of all the indie Yiddish labels of this period, only Banner sustained a long enough run to create a hefty catalog of nearly 200 titles.)

For Banner B-2012, (their second release) Rosenberg turned to his most popular stage-tested character, a frantic, sputtering allrightnik named “Getzel,” who is plopped down in a stadium and then brilliantly describes what happened. Unlike Griffith’s later laconic amble, which consumed both sides of a 10-inch record, Rosenberg’s animated Yiddish-English antic declamation does it on one side.

“Hey! What’s going on here?” he asks. “ Look at them running! What kind of chaos is this? America, you rascal! Everyone’s running. Everyone’s doing. Everyone’s grabbing. I have a habit that when I see people running, I run, too. So, I’m on the subway up to the Bronx, something must be doing there so I run, too. Until I come to a place they wouldn’t let you in without a ticket. A dollar a ticket? But I see everyone grabbing a ticket and God knows what sort of bargain this is so now they have my dollar, too and they let me in.”

While it’s not clear who wrote the skit, a guess might be the author of the companion Getzel Banner 78: “Getzel at a Baseball Game.”

Around the same time the Banner disc was made, a longer version of the monologue, “Berl Bass Shpilt Baseball/Berl Bass Plays Ball” was performed by Zvee Scooler on a Dec. 19, 1947 episode of “Forward Hour” on WEVD and credited to humorist Louis Markowitz. However, even if “Getzel at a Football Game” was not the product of Rosenberg’s own high-octane imagination, his unique lapel-grabbing style monologist style made everything he did seem inexorably his own.

Sales of “Getzel,” while nowhere near “What It Was, Was Football” numbers, did help to keep the fledgling Banner enterprise solvent and allowed Rosenberg to purchase a one-time Miami Beach roadhouse and turn it into his homage to the beloved Roumanian restaurants he left behind on the Lower East Side. 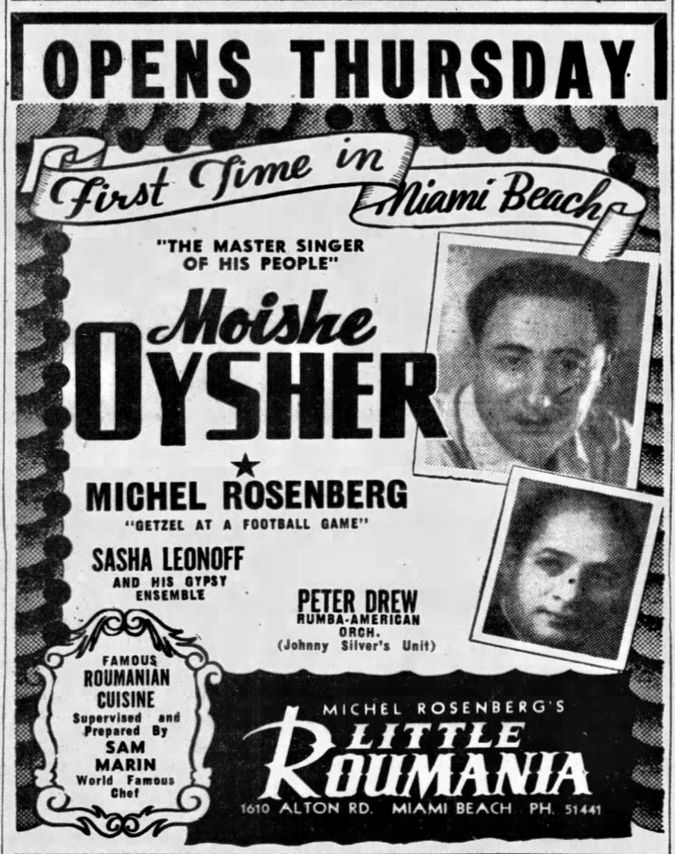 In 1953, Rosenberg joined a new rising star on the novelty Jewish music circuit: Mickey Katz who, like Griffith, was then a best-selling Capitol novelty recording artist. Katz featured Rosenberg and his phalanx of Getzel monologues in “Borscht Capades,” followed by the shows “Farfel Follies,” “Matzo Ball Scandals,” Kishke Capers,” all of which featured Michel “Getzel” Rosenberg. 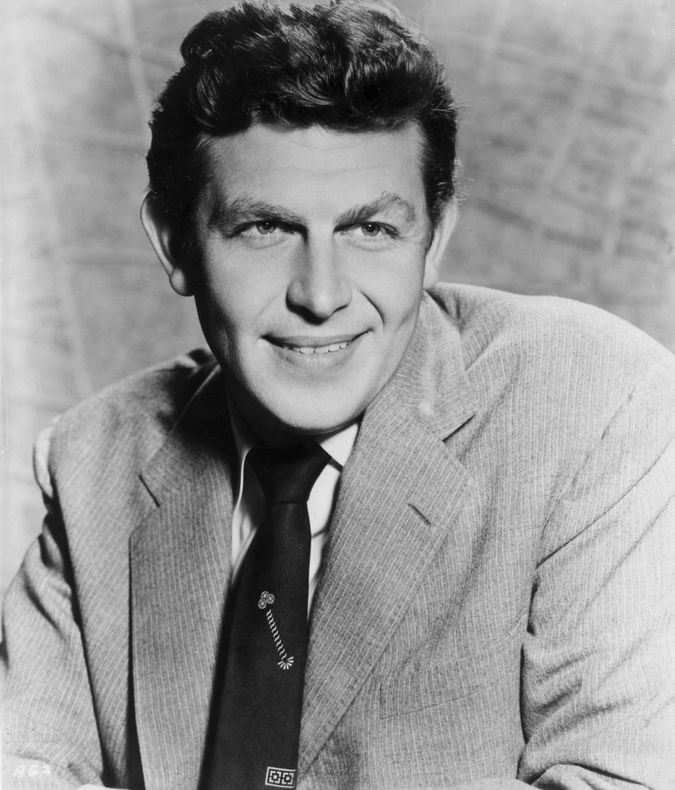 Future Star of Stage and Screen: Andy Griffith launched his career with a novelty comedy record. By Getty Images

So, how would a country boy like Andy Samuel Griffith from the small town of Mount Airy, North Carolina (Jewish population: statistically insignificant), experience, or even encounter Jews or Jewish humor?

On its face, the chances do not seem good but, as it turns out, a well-known local incident, dating back to the 1920s of Griffith’s Mount Airy youth, offers a clue.

A popular store owner named Cohen was approached by the bully of the town leading a dog on a chain: “Hey, Cohen,” he called out, “this here’s my dog and he’s half Jew and half son of a bitch!” to which Cohen coolly replied: “Ah, I see he’s little kin to the both of us.”

The oft-repeated anecdote (I heard it from legendary Mount Airy fiddler and banjo player Tommy Jarrell in the 1970s) reveals the local persistence of a funny and positive event involving Jews, one which Griffith may have certainly encountered while growing up.

So, could Andy Griffith have also heard the Getzel record? Again, not likely. But consider the overheated ubiquity of novelty recordings in American popular music from the late 1940s to the mid-1950s (the same popularity that accounted for Griffith’s own breakout success). Odd and unusual novelty records — just as some which were made for a wholly different audience — could still cross over to major success.

But, if the primary source for Andy Griffith wasn’t the Michel Rosenberg recording on Banner, then this is a story of two men who never met or knew each other and who independently (and nearly simultaneously) came up with an all-but-identical (but nonetheless culturally-specific) comic monologue about an unwilling and unpleasant first encounter with football. That would be an astounding story in and of itself and one well worth its own hit record.

Henry H. Sapoznik’s most recent work is the production and annotation the two-CD set “The Village Out West: The Lost Tapes of Alan Oakes Field Recordings of the California Folk Music Scene” for Smithsonian-Folkways.