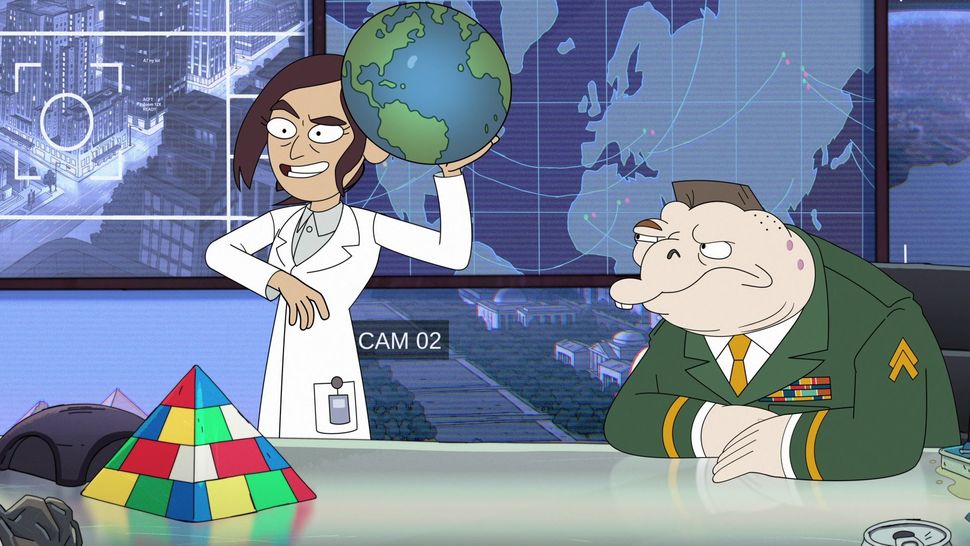 Reagan and the dolphin dude plan to take over the world or something. Image by netflix

Jews are at the roots of most of the major conspiracy theories. A secret cabal who runs the government? That may be a QAnon tenet these days, but it’s originally from “The Protocols of the Elders of Zion,” a made-up pamphlet purporting to detail the Jewish plan for global domination. Bloodsucking lizard people? That one is made out of a bit of blood libel and a hodgepodge of stereotypes about Jewish immigrants to the U.S. being less than human.

All of these are, of course, fake. Except in the world of Netflix’s new cartoon, “Inside Job.” There, a secret cabal does run the world, killing J.F.K., replacing the president with a robot and faking the moon landing (sort of; it’s actually a sex colony now). Cognito Inc., as the cabal is known, is funded by — you guessed it — lizard people who drink blood. 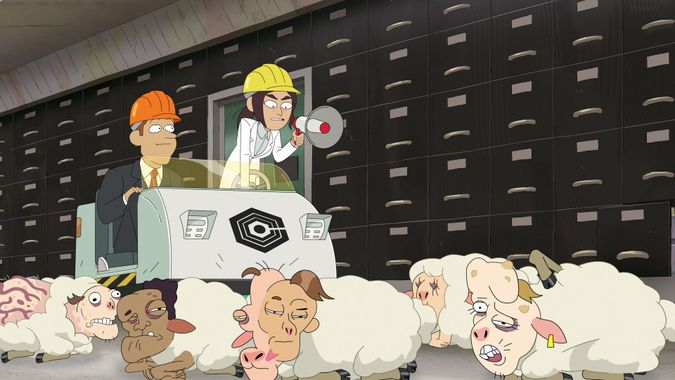 Not how I personally pictured “sheeple.”

A cynical yet whimsically animated romp in the mold of “Rick and Morty,” the show indulges many common conspiracy theories, cackling at the ignorance and manipulability of the public — exactly what real conspiracy theorists fear.

On Twitter, some worried the show would encourage antisemitic beliefs. After all, it shows how the Deep State controls the media, planting Twitter outrage to distract us from the cabal’s real work. A guy whose whole job is inventing and distributing pathogens is a given.

But the show also makes it hard for anyone to truly believe these things; there’s nothing like a mainstream animated show to defang dangerous beliefs. Besides, none of the characters in the show are Jewish or even coded as such; one is a weird dolphin hybrid, one is a mushroom alien, and the others include a WASP-y frat bro, a Black woman who runs the media and a doctor who is only brilliant when he’s high. Reagan, the socially awkward main character and boss of the team, is voiced by Lizzy Caplan, who is Jewish, yet the character has no signs of being a member of the tribe — no mentions of a bat mitzvah or even of demanding parents who want her to marry a doctor. 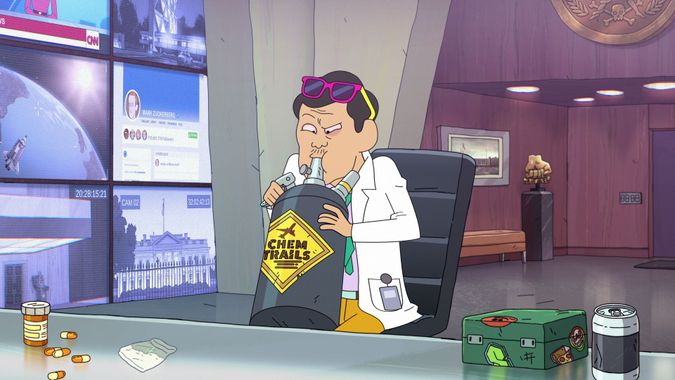 Chem trails are real, and, apparently, fun to huff. Image by netflix

The show’s real commentary is about the soullessness of corporate America. Even Cognito’s Deep State company answers to an even greater secret cabal — a shadowy board of directors, who look sort of like the guards in “Squid Game.” Many of the episodes revolve around having to schmooze with the reptile people to get funding, take mandated sensitivity trainings or avoid layoffs. Reagan has devoted her life to her career, yet is never promoted; meanwhile, thanks to her single-minded ambition, she has no friends or romantic life to speak of.

The show has plenty of missteps — an episode that seems to make fun of an Asperger’s diagnosis, for example, was particularly tasteless, and many of the jokes feel one-dimensional. But it never strays too close to legitimizing any conspiracy theory.

There are a few things that could be interpreted as fodder for antisemitism, if you were really looking. Hollywood turns out to be full of disguised lizard people, including Mark Zuckerberg. But Taylor Swift and Queen Elizabeth II are reptiles too — hard to imagine less Jewish celebrities. Plus, if you were a devoted conspiracy theorist, you’d probably see a cartoon spoofing the Deep State as a Deep State-controlled plan to redirect anyone getting too close to the truth. (In that case, though, you’re probably a lost cause.)

Instead, the show’s most dangerous aspect might be that it portrays conspiracy theories as silly. As absurd as they sound, these kinds of false beliefs can lead to real-world harm. Still, there’s nothing that stops a bully quite like laughing in their face.