How Leonard Bernstein embraced his Jewishness — and changed the world 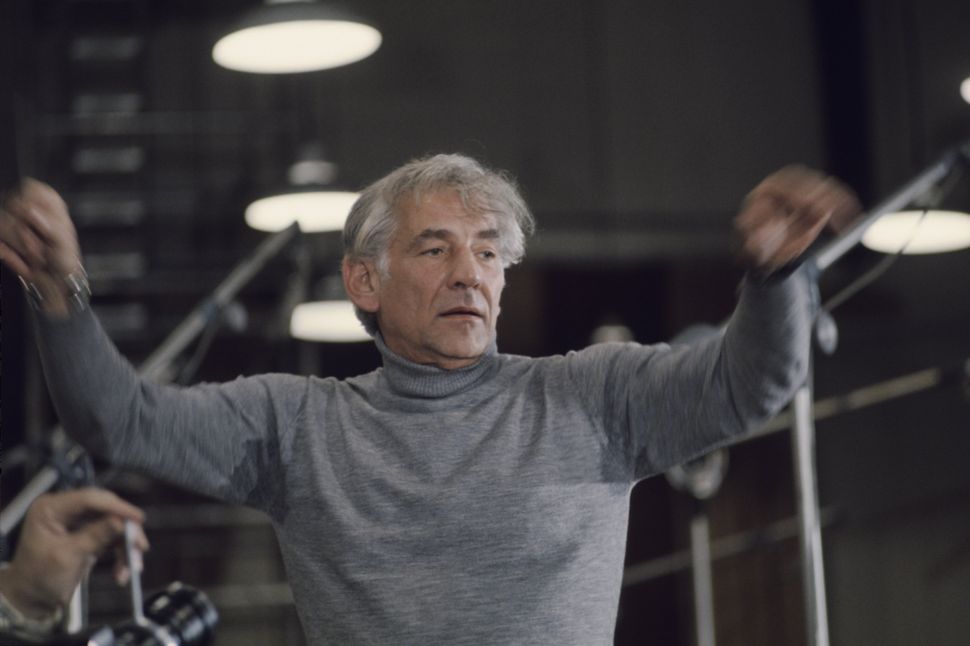 Early in his career — before he had a career, really — one of Leonard Bernstein’s mentors suggested that such an obviously Jewish name would never adorn the marquee at Carnegie Hall. Perhaps he could become Leonard S. Burns instead?

Bernstein seriously contemplated the name change, he reveals in director Douglas Tirola’s “Bernstein’s Wall,” a documentary now making the festival rounds. But he decided he just couldn’t do it. Calling his Jewishness both “a curse and a blessing,” Bernstein embraced his heritage, traveling to Israel, incorporating Hebrew into his talks, advocating for peace and civil rights. Of course, he also proved his mentor dead wrong when he became music director of the New York Philharmonic at Carnegie Hall.

A skillfully assembled survey of an illustrious life, “Bernstein’s Wall” locates its main theme in Bernstein’s political engagement and his attempts to harness both his music and his celebrity to progressive causes. In a series of archival interviews that anchor the 105-minute film and provide its narration, Bernstein – who died in 1990 at age 72 — muses on the role of the artist in society and the power of music to transform hearts and minds. But his idealism isn’t unbounded. “The artist can change the world,” he says at one point, “but he can’t do it necessarily through his art.”

Tirola explained to a Philadelphia Film Festival audience in late October that he opted to forego the common documentary device of using “talking heads” to provide commentary and context. Instead, he relied on Bernstein’s own voice. “If he doesn’t talk about it,” Tirola decided, “it can’t be in the movie.”

That austere formal choice turns out to have its pluses and minuses. As his subject reflects on his achievements and setbacks, with prodding from Barbara Walters, Mike Wallace and lesser-known interlocutors, Tirola often achieves a virtuosic meshing of words, images and music. The movie’s montage sequences mirror Bernstein’s own dynamism. The film highlights his collaborations with Black musicians, the U.S. government’s Cold War voiding of his passport, his infamous “Radical Chic” fundraiser for the Black Panthers, and his vehement opposition to the Vietnam War.

But Tirola’s focus, at once expansive and diffuse, extends well beyond Bernstein’s politics. The documentary skims through his entire career trajectory, name-checking some (though not all) of its musical highlights, parsing his fraught relationship with his immigrant father, and alluding to his profoundly tortured romantic life.

We glimpse Bernstein’s aerobic conducting: the maestro jumping up and down to mark time, sweat beading his brow. We see him as an educator, including a snippet — tantalizingly little — of his famous televised “Young People’s Concerts.” A few reminiscences and cinematic images acknowledge Bernstein’s most popular work, “West Side Story,” without detailing its seismic cultural influence. Bernstein doesn’t discuss his operetta “Candide,” his Oscar-nominated score for the film “On the Waterfront,” nor his frustration at never being fully appreciated as a classical composer.

Bound to his own narrative conceit, Tirola is even more cursory in his treatment of Bernstein’s personal life. The conductor, presumably bowing to the mores of mid-20th-century America, married a Chilean actress, Felicia Montealegre, in 1951. They had three children, all thanked in the film’s closing credits. But Bernstein directed most, if not all, of his sexual passions towards men. “This has to be in the movie,” Tirola said in Philadelphia, “because it’s a part of the story. But he does not talk about it, or we could not find it in a filmed interview or an audio interview.”

So Tirola handles the subject by quoting letters — Bernstein’s fiery epistles to the composer Aaron Copland, a missive from Felicia attesting to her willingness to tolerate her husband’s pursuit of male lovers. Felicia also appears in film footage in which she admits that a work-obsessed Bernstein doesn’t pay much attention to her.

But “Bernstein’s Wall” makes no effort to catalogue or characterize Bernstein’s prodigious love affairs, doesn’t mention that he left his wife (though never divorced her) for a man, and doesn’t grapple with the impact of his behavior on his family. Tirola does highlight Bernstein’s profound grief at Felicia’s untimely death, hinting at the complexities of their love.

“Finding material for our film was like going to a giant tag sale, looking for the rare gems,” Tirola says in the film’s production notes. Among the examples he cites are a Bernstein letter about aging and an image of an orchestra of Holocaust survivors. More striking still are excerpts from the Nixon White House tapes in which the President and his chief of staff, H.R. Haldeman, strategize about skipping the world premiere of Bernstein’s “Mass” at the John F. Kennedy Center for the Performing Arts and express revulsion at the composer’s sexual proclivities. We also learn of Bernstein’s disdain for President John F. Kennedy for heeding his hawkish advisers rather than his own instincts about the Vietnam War.

Whatever its flaws, the documentary benefits greatly from having Bernstein at its center. It is hard to imagine a more charismatic or multifaceted subject: a truly beautiful young man, a ferociously passionate and animated conductor, an artist who could be both serenely contemplative and cruelly perfectionistic.

Mostly chronological in its storytelling, the film is bookended by Bernstein’s trip to Germany in 1989, shortly after the Berlin Wall was dismantled – an incident that helps explain the documentary’s otherwise confounding title. In Berlin, Bernstein triumphantly conducted Beethoven’s Ninth Symphony with its choral “Ode to Joy,” altering Schiller’s German lyrics for the occasion. For “Freude,” meaning joy, Bernstein substituted “Freiheit,” or freedom – an exuberant political choice that married his art to the moment.

How Leonard Bernstein embraced his Jewishness — and changed the world