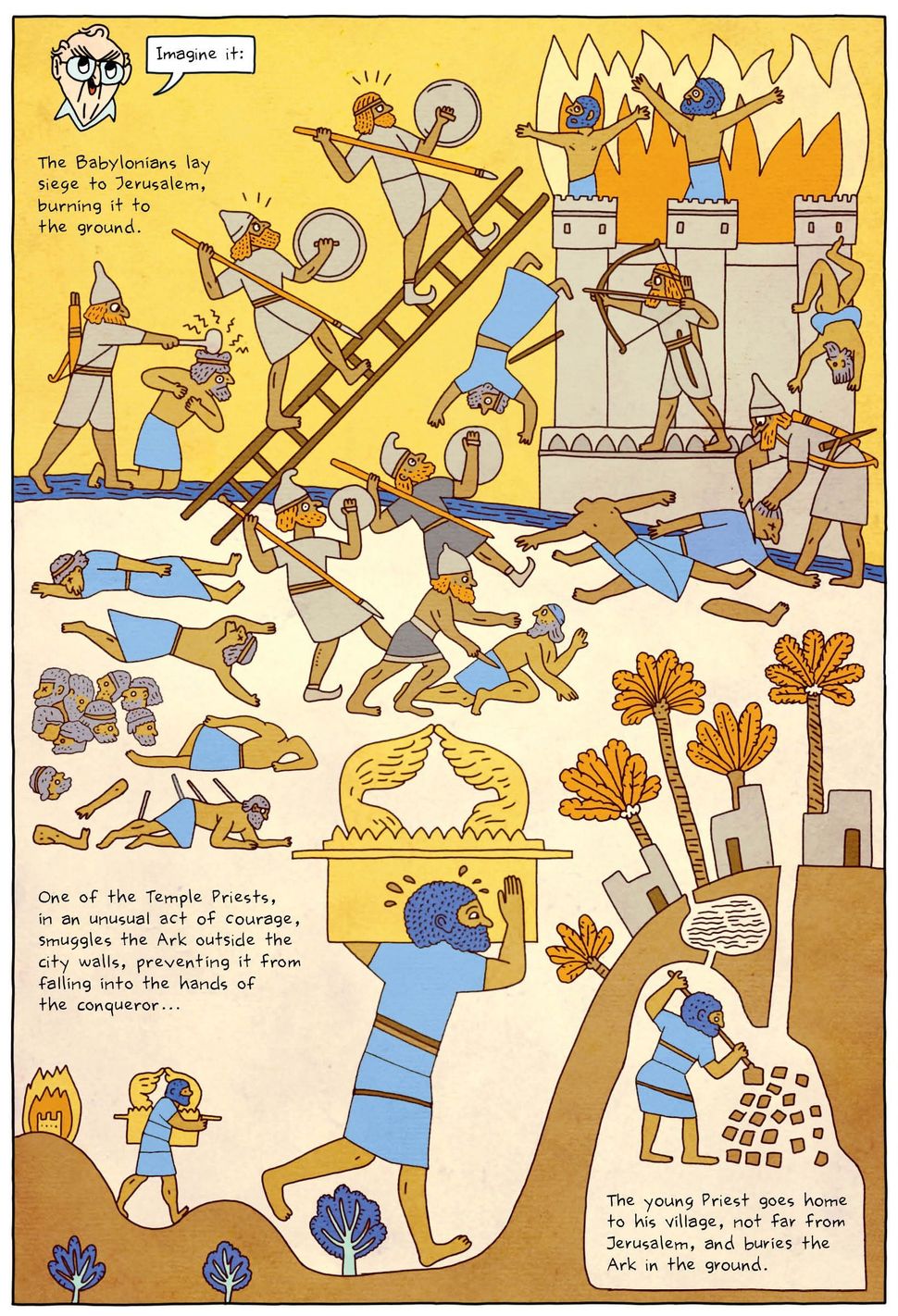 Rafi Sarid, the book’s antagonist, imagines how the Ark may have ended up buried in what is now an Arab village. Courtesy of Drawn & Quarterly

What would happen if Indiana Jones was an Israeli woman? And what if her hunt for the Ark of the Covenant could embolden Israeli settlers and upend the lives of Palestinians?

Eisner Award winner Rutu Modan’s new graphic novel, “Tunnels,” a madcap dive into the charged world of Israeli antiquities, gives us the answer. Modan places her lost Ark — the same one Indy was after — at a geopolitical fault line, just beyond a security wall in the West Bank. Stopping the Israeli crew from advancing toward their find, the barrier’s a glaring metaphor for the country’s endless impediments to peace and understanding. But, Modan suggests, a country where every patch of dirt might hold an antique claim to the land has no shortage of blunt force symbolism.

Caught in the middle of the Ark’s excavation are Nili, an Israeli who began digging for the sacred object with her archaeologist father just before the First Intifada, and Mahdi, a Palestinian who helped with the dig when they were both children, and who is now working on a tunnel of his own.

Of course, it’s a bit more complicated than all that. Nili, a single mom, brings her cell-phone-obsessed first grader along and is relying on a group of fanatical settlers for the dig. (The settlers bring a friendly red heifer to sanctify the Ark.) An IDF brigade commander is helping them, wanting his twins, Moshe and Dayan, to have their bar mitzvah Torah reading beside the ancient vessel of the shattered Ten Commandments. 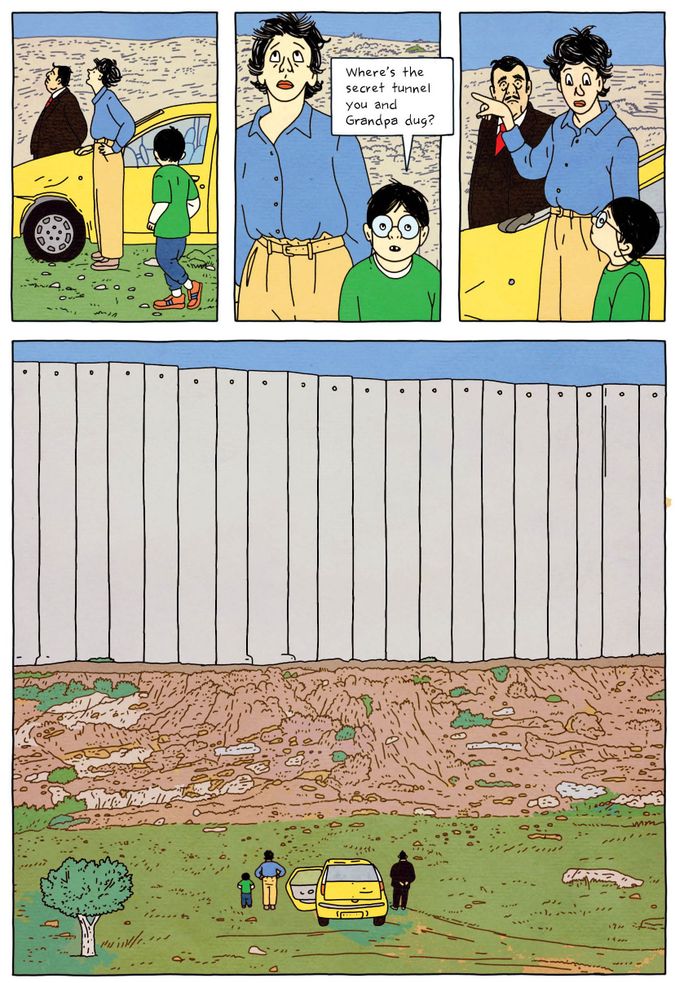 The way to Nili’s tunnel is blocked by a security wall. Courtesy of Drawn & Quarterly

Meanwhile Nili’s brother, Broshi, is working with their father’s one-time colleague, Rafi Sarid, to take the Ark for himself, with the hope of landing tenure at Hebrew University. And then, there’s the question of who the Ark belongs to if it’s found in Area A. Though its religious significance to the Jews, and its power as a sign of historic Jewish presence in the West Bank, is overwhelming, the law would give it to the Palestinians. Naturally backs are stabbed, crosses are doubled and no one comes out a hero.

Modan, whose characters’ simple, expressive line style is juxtaposed with meticulously rendered backdrops, has landed on an allegory that is as on-the-nose as it is effective in its satire. In Israel, where archaeology is a de facto arm of politics, Nili and Mahdi squabble over who should be able to access the tunnel they started together decades ago. They meet in the middle, after boring through from opposite sides of the security barrier, which straddles a 1949 armistice line.

“With all due respect, it’s our tunnel,” Mahdi says, refusing to let Nili pass through the vegetable-smuggling tunnel he’s been working on. “Maybe this part, but from there on out it’s the tunnel that my dad dug,” Nili responds. “That my dad dug.” “But my dad started it.” “And then left.” “And now we’re back!” “And now we are here.” “But we were here first.” “Depends where you start counting.”

You don’t need a degree in Middle Eastern Studies to know this isn’t really about a tunnel. 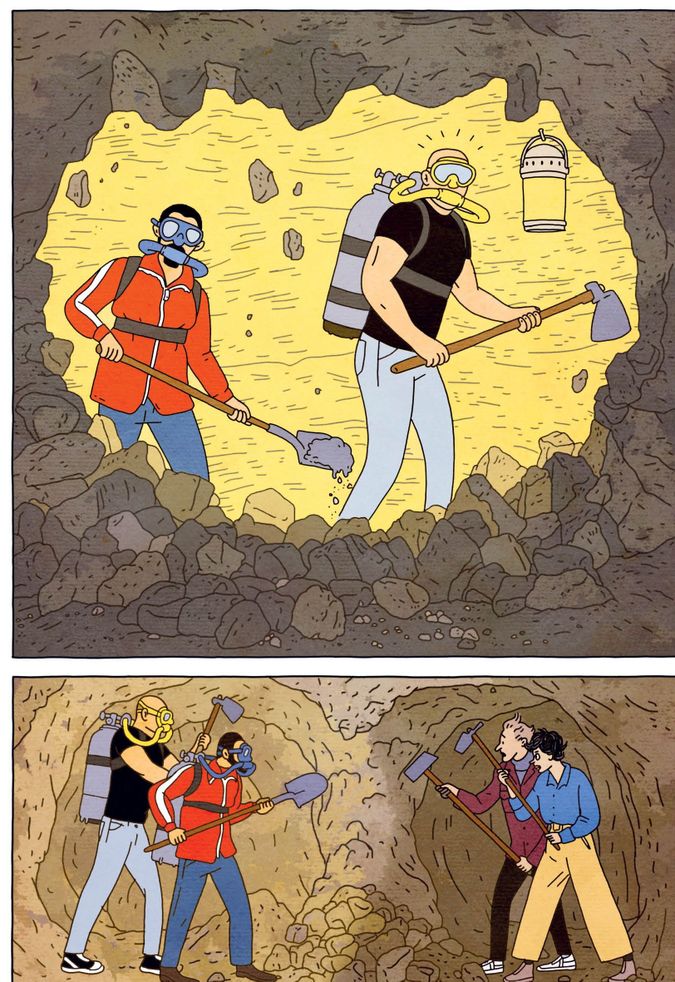 Nili and her brother Broshi encounter Mahdi and his brother Zuzu while digging their separate tunnels. Courtesy of Drawn & Quarterly

Madhi eventually makes the case for keeping the Ark hidden, fearing its discovery in his village could be the cause of his displacement. In a way, the Palestinian perspective is the story’s true discovery, unearthed halfway through, after establishing the family and academic squabbles on the Israeli side of the Green Line. Modan’s viewpoint is, by her own admission, limited.

Even with this shortcoming, the storytelling is masterful, cinematic — and very funny. A compromised collector (who works with ISIS to land his big pieces) has, among his prodigious fakes, Joseph’s five year plan for the Pharaoh. Later, that collector, Emil, hides in a sarcophagus to eavesdrop, introducing an element of farce that kicks into high gear later. 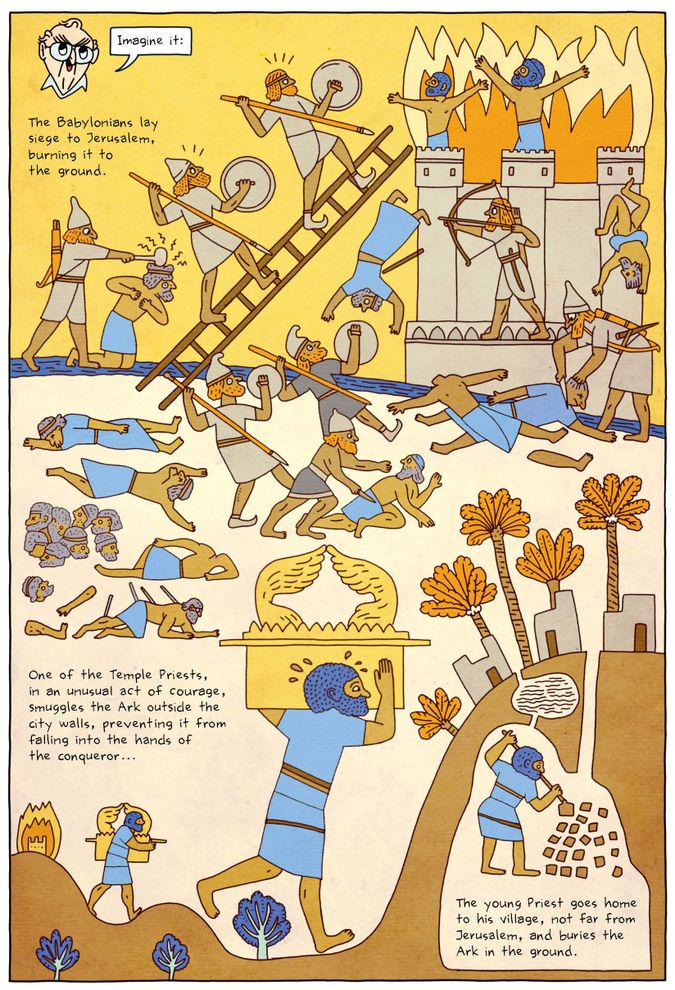 Rafi Sarid, the book’s antagonist, imagines how the Ark may have ended up buried in what is now an Arab village. Courtesy of Drawn & Quarterly 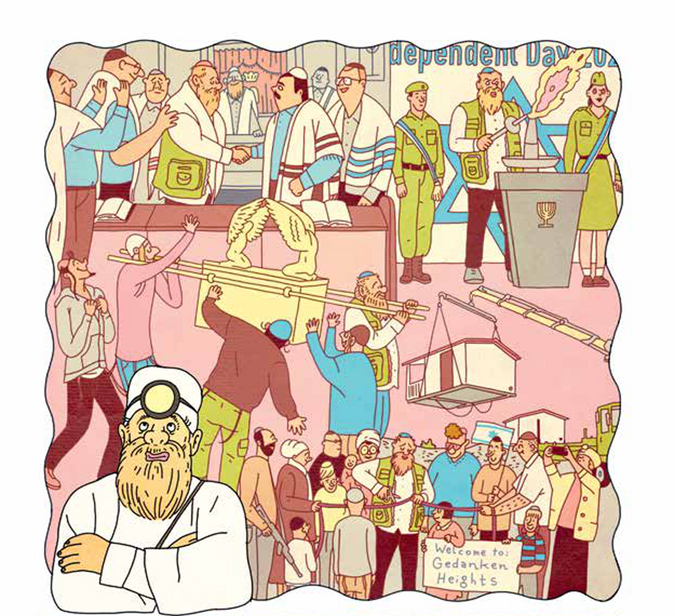 The leader of Nili’s team of settler, Gedanken, imagines his accolades on discovering the Ark, including an eponymous settlement. By Drawn & Quarterly

Modan, the author of “Exit Wounds” and “The Property,” also comes armed as a social critic, not hesitating to spell out the anti-Palestinian bigotry of extremist settlers, the leader of whom moonlights as a Birthright guide when not working on Jeremiah’s Pit in Silwan. If the name of that East Jerusalem neighborhood, the site of recent violence, bulldozed buildings and the threatened eviction of Palestinians, makes you wince now, the author is with you.

In a wonderful, if gutting, afterword, Modan addresses the events of this summer, when Hamas and Israel exchanged rocket fire and airstrikes and Israelis and Palestinians clashed in the streets of the Old City. Weaving a parable about the origins of the Bible, believed by some to be a text unifying the distinct peoples of Judah and Israel, she suggests a new narrative following that model for Israelis and Palestinians.

“Couldn’t I suggest that we write one story from all the old stories, a story that will be bigger than all combined? A terrible and wonderful and turbulent story full of holes and contradictions?” she writes.

“Tunnels” is too polished and selective to be this story, but makes a clear argument for its development. A failure of trust between the diggers dooms the whole enterprise as competing needs — secular and nationalistic, religious and existential — make any fair resolution seem impossible.

That bigger story Modan hopes for may yet emerge. Even if, like the Ark of legend, it remains elusive.