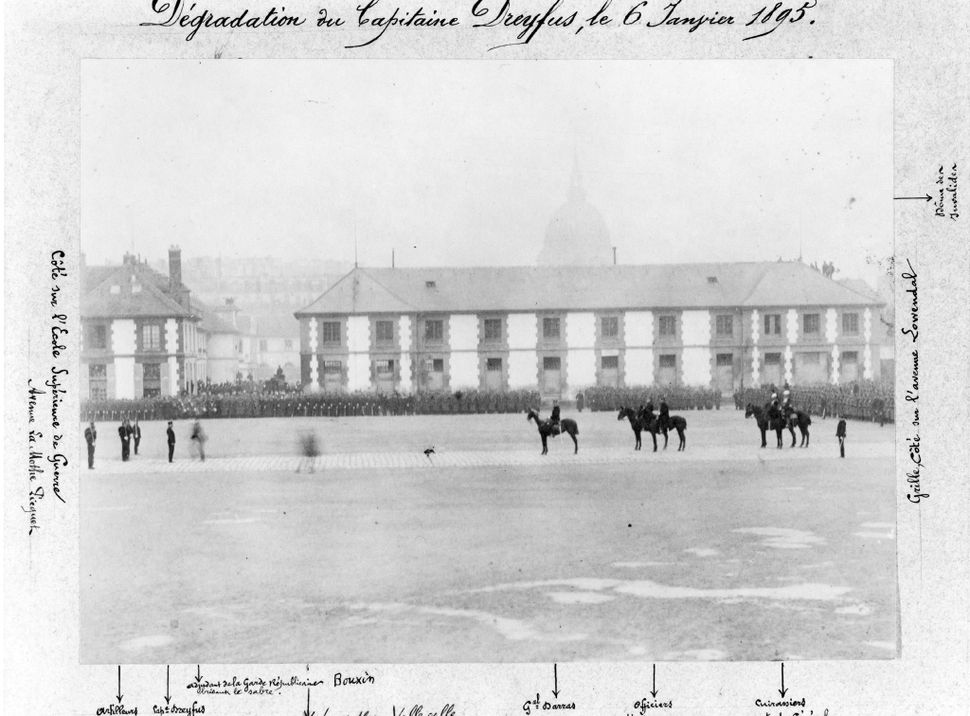 A photograph of the degradation ceremony of Alfred Dreyfus. By Getty Images

Macron’s visit underlined that you don’t have to be Jewish to be shocked by the French army’s perfidy in covering up its persecution of Dreyfus. Back in 1899, Queen Victoria, no less, telegraphed her prime minister: “I am too horrified for words at this monstrous horrible sentence against this poor martyr Dreyfus. If only all Europe would express its horror and indignation.”

More recently for Macron, one motivating concern is that a potential opponent in an upcoming presidential election scheduled for next April has repeatedly cast doubt on Dreyfus’ innocence.

Last September, on the current affairs show “Face à l’info” (“Facing the News”) presented by the Canal+ Group, TV pundit Éric Zemmour stated: “Many were ready to declare Dreyfus innocent, even if that story was problematic too, but we aren’t going to retry the Dreyfus trial here.” Two weeks later Zemmour declared that “we’ll never know” about Dreyfus’s innocence, which “isn’t clear,” and anyway the French military officer wasn’t prosecuted “so much as a Jew, but as a German.” 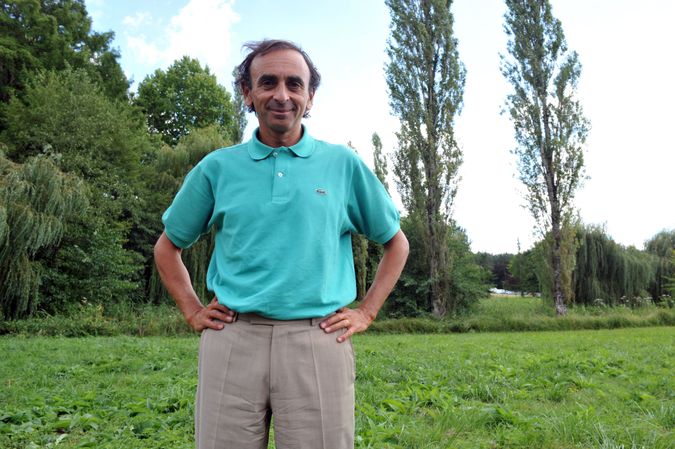 Kickbacks were immediate. The Chief Rabbi of France, Haïm Korsia, described Zemmour as “certainly antisemitic, obviously racist.” 86-year old Nazi hunter Serge Klarsfeld responded to Zemmour’s other declarations rewriting the history of French Jews to agree with Fascist propaganda by commenting succinctly: “All this sickens me.”

Sickening Zemmour may well be in his self-appointed role as nattering nabob of negativism, to cite a long-gone U.S. politician’s phrase ghostwritten by a Jewish speechwriter. Yet Zemmour is in no way original.

In France, convinced anti-Dreyfusards have continued to state their viewpoints up to the modern era. This is so, despite the fact that, or perhaps because, as the French Jewish political scientist Raymond Aron commented, the Dreyfus affair has exceptional purity as a “judicial error”: “After a certain point, maintaining the guilt of Dreyfus against the facts, against the evidence, was no longer preserving the army general staff, but rather further compromising it… Public affairs rarely present the simplicity, the purity of the Dreyfus affair.”

Despite this transparency, even after repeated trials were finally over for Dreyfus, what the French lawyer Germain Latour termed an ongoing “epidemic of mental cholera” continued to grip French antisemites, who still doubted the results.

As recently as 1994, Paul Gaujac, a retired colonel who headed the French army’s historical service, was fired for publishing an article in an official army magazine, describing Dreyfus’ innocence as one possible interpretation, merely a historical consensus rather than fact: the “thesis generally accepted by historians.”

Tensions between the French army, traditionally ultra-reactionary and hating anything that shows it in a bad light, and governmental politicians, have been usually high. In July 2019, Florence Parly, France’s Minister of the Armed Forces, floated the notion that Dreyfus might be posthumously promoted to the rank of general in acknowledgment of hindrances to his career caused by groundless prosecutions. That idea was soon seen as dead in the water and indeed, there has been no follow-up.

Meanwhile, newly available documentation shows Dreyfus as a militant hero through cool, Cartesian self-defense and not just victim, as well as an anti-colonialist, progressive thinker. This notably improved his image from the stuffy, stilted character who bored Hannah Arendt and other authors.

For a time after the year 2000, Dreyfus’s innocence or guilt was little mentioned by ultra-right wing French groups, perhaps weary of the topic. But then Zemmour revived the matter on television, since he reads or rather misreads, books and noisily misinterprets them to audiences on the Canal+ Group station and elsewhere.

Of course, despite Zemmour’s claim, Dreyfus was no German, but French Alsatian of a highly patriotic sort. Earlier this year, the French-born Israeli historian Simon Epstein posted a comment online about how he was initially silent when Zemmour misquoted and misinterpreted his books on the air, as he found it “funny, really funny” that Zemmour, of Algerian Jewish origin, should be representing old right-wing and Fascist historical disinformation against Jews.

Yet ultimately, Epstein concluded, echoing the words used in another context by Léon Blum, a former French Jewish prime minister, he was “horrified” by Zemmour.

English language journalists, especially in the U.S. and U.K., likewise write about Zemmour and his apparent momentary popularity with a degree of panic, doubtless because in these countries, racist and media-hungry chronic liars were recently elevated to the highest political power, creating kakistocracies marked by lethal ineptitude.

However, the French often vote in preliminary presidential elections for a fringe candidate to demonstrate pique with the ruling elite. This was the cause of fleeting electoral successes for the far-right wing candidate Jean-Marie Le Pen. Enthusiasm for extreme or unusual candidates typically dies down in later rounds of voting.

In Zemmour’s case, one sticking point is surely his vocal antisemitism, alienating many Jewish voters and attracting only ultra right-wing and left-wing adherents. His statements on Dreyfus are offensive, but are mostly considered (with a typically Gallic shrug) to be about a distant historical subject of little urgent interest for many French people.

However, when he insulted the memory of victims of a 2012 terrorist assault on a Jewish school in Toulouse, suggesting on France 2 TV last September that neither the assailant nor his three child victims were really French because they were buried in foreign lands, this was generally seen as far more viscerally repugnant.

It was also inaccurate, like most of Zemmour’s remarks, since the terrorist Merah was buried near his hometown of Toulouse, not in his ancestral Algeria, even if the children’s families chose to have them buried in Israel. With his usual inexactitude, laden with turgid pretentiousness, Zemmour commented, “Anthropologists teach us that we come from the country where we are buried. They did not belong to France.”

Ironically, what in all likelihood will finally capsize Zemmour’s hopes for political power is the fact that he is Jewish, even if it may temporarily appear to help him evade some charges of antisemitism.

As Simon Epstein noted, previous French Jewish far-right ideologues like the press baron Arthur Meyer and the attorney Edmond Bloch converted to Catholicism to better assimilate and gain public acceptance. Whereas Zemmour, as he claimed to Le Point in 2014, continues to go to temple on high holy days and keeps kosher.

A few Jewish statesmen, such as Léon Blum and Pierre Mendès France, have been elected to high office, but they were distinguished, highly intelligent, diplomatic gentlemen, not mouthy talking heads who blabber nonsense while quivering with a discernable tremor, possibly of nervous origin.

The notion of electing Zemmour, a one-man Jewish antisemitic reality show, to high office is unthinkable even in today’s France. It would be too much like aping recent electoral stupidities in two nations much loathed by France, the U.K. and U.S.

Dreyfus’ reputation is secure when only extremists like Zemmour and his ilk cast doubt on his innocence.