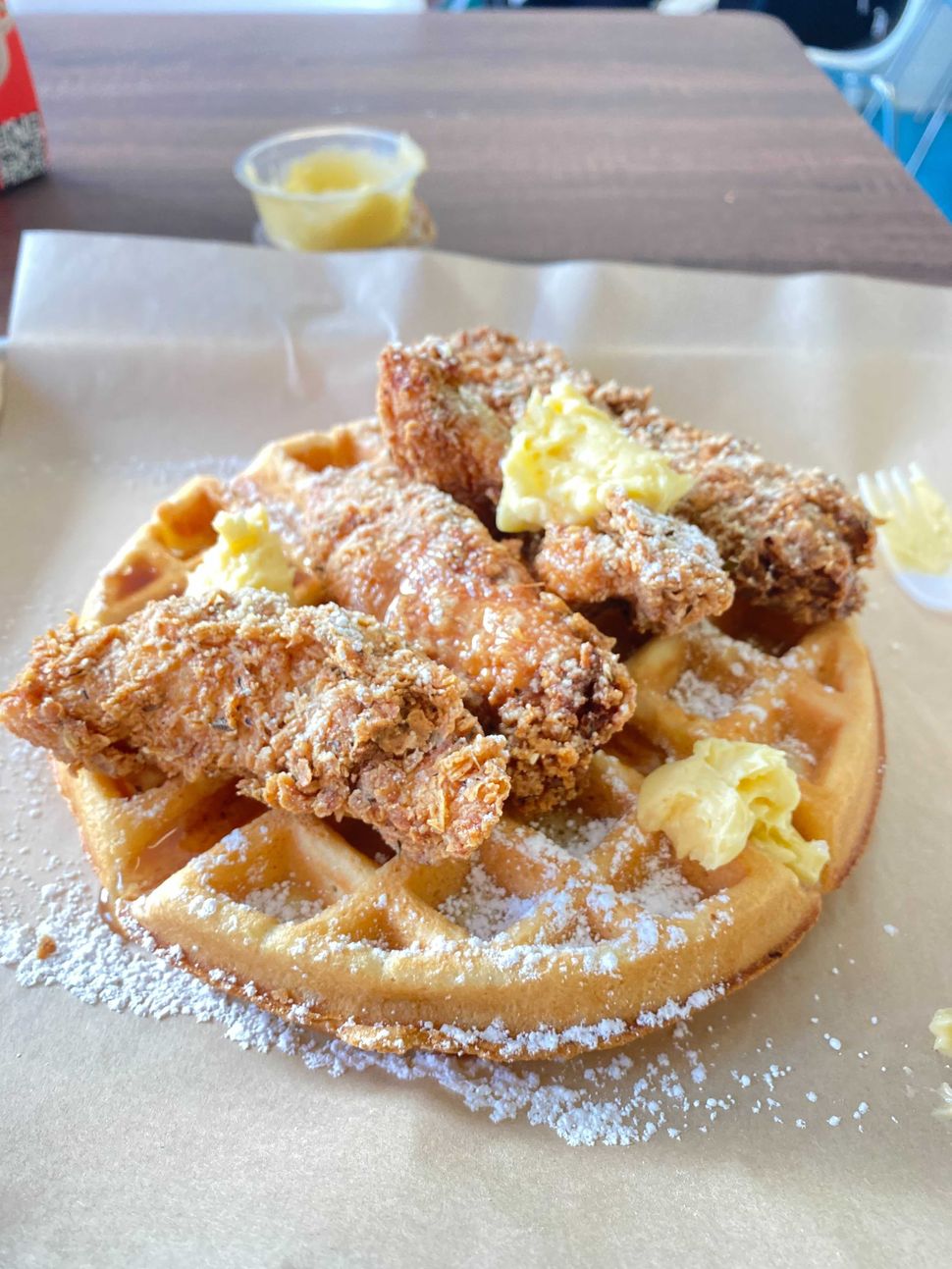 The signature kosher chicken and waffles dish, the first of its kind in Los Angeles. By Zach Golden

It’s the dawn of Kosher Food 3.0, at least in Los Angeles. Out with pastrami on rye and matzo ball soup. In with chicken-and-waffles.

The arrival of Melrose Bite, a kosher fried chicken joint in the city’s Fairfax area, more or less coincides with the closure of Pico Kosher Deli, a restaurant that had been an L.A. institution for decades. Together, the events seem to signal a new era of kosher dining in which classic Ashkenazic fare has been supplanted by non-Jewish cuisine adapted for a kosher eater.

In the case of chicken-and-waffles, observant Jews now can indulge in a signature food of Black Los Angeles that has long been the stuff of fantasy. Beyond the absence of a hechsher at Roscoe’s House of Chicken ‘N’ Waffles, the South Los Angeles restaurant that popularized the dish, the prospect of eating chicken and waffles together was non-kosher on its face for mixing meat and dairy.

Building a restaurant around the dish once might have appeared a fool’s errand. But in 2021, chefs Natan Hassan — full disclosure, a childhood friend — and Liat Alon are betting on it. 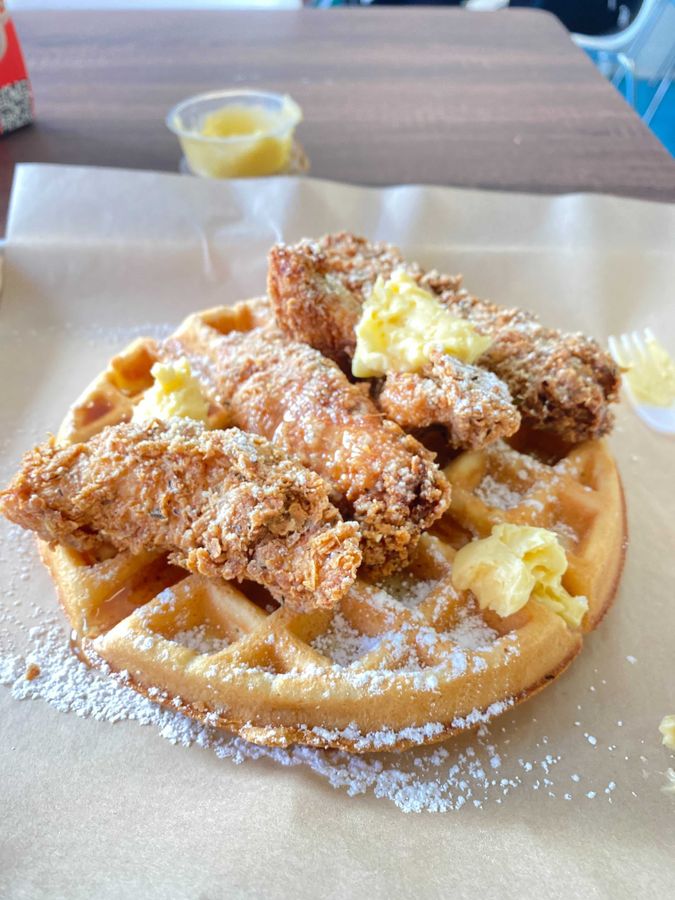 The signature kosher chicken and waffles dish, the first of its kind in Los Angeles. By Zach Golden

I ventured to Melrose Bite on a recent weekday afternoon to sample its signature dish, and came away thinking the duo might be onto something.

I’ve never been to Roscoe’s — more full disclosure — because it isn’t kosher. But at Melrose Bite, three heavily seasoned chicken strips come on a waffle with a light snowcap of powdered sugar, with pancake syrup and honey butter (like the waffle, it’s pareve) on the side. It’s no light snack.

This is intense fried chicken — marinated in garlic sambal and paprika, breaded with a spice mix that includes cumin, oregano and thyme. It was succulent and tender, the coating slightly crumbly.

The waffle — the faux-dairy component — is adequate. It’s a bit heavy, like a hotel lobby continental breakfast waffle. Being unable to smother it in butter is a real disadvantage. Yet I devoured all of it — the chicken, the waffle, and a solid third of my friend’s lemon-pepper french fries (a winner) and waddled out of the bite-sized storefront feeling thankful for elastic waistbands. Perhaps most importantly, at $14.50 the dish is competitive for kosher food, and about what you’d spend at Roscoe’s. Melrose Bite is not located on that ultra-Jewish stretch of Pico Boulevard, but in an area whose Jewish heyday is behind it. While the Fairfax district — less than three miles northeast of Pico-Robertson — remains home to a number Jewish institutions, like the offices of the National Council of Jewish Women and Mizrahi synagogue Babe Sale Congregation, its cultural identity has shifted in the 21st century from traditional to trendy. The restaurant is squeezed between a head shop and a record store, and the public high school across the street, once teeming with Jewish students, probably does not have enough Orthodox students to make a minyan.

Canter’s Deli is still there, and still not kosher, but otherwise Fairfax has evolved to serve two sets of consumers, both changing. For the Jewish crowd that finds deli fare passé, Melrose Bite is offering a dish that kosher epicures could only find before as an hors d’oeuvre at fancy weddings and temple banquets. And for the non-Jewish high schooler looking to pig out after the final bell, it’s a classic L.A. taste — or a good-faith approximation of it.

Among its hechshered competition, Melrose Bite stands out for a short, focused menu, solid Southern-style kosher food, and also for an original mural painted on the interior, a landmark map of Los Angeles. It’s the kind of aesthetic detail you won’t find in Pico-Robertson — welcome to Kosher 3.0. 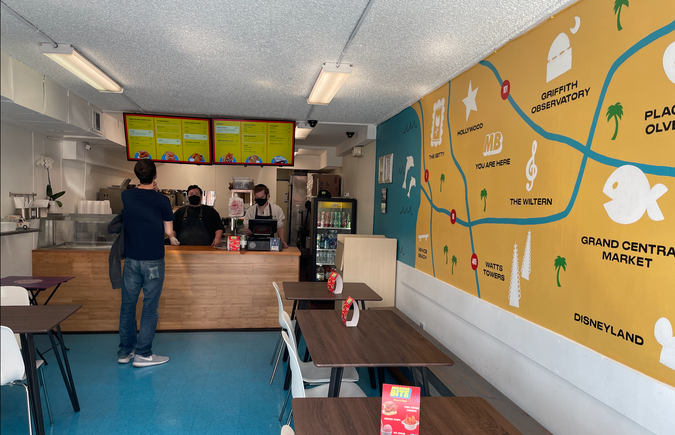 I was a big fan of the mural at Melrose Bite. By Louis Keene