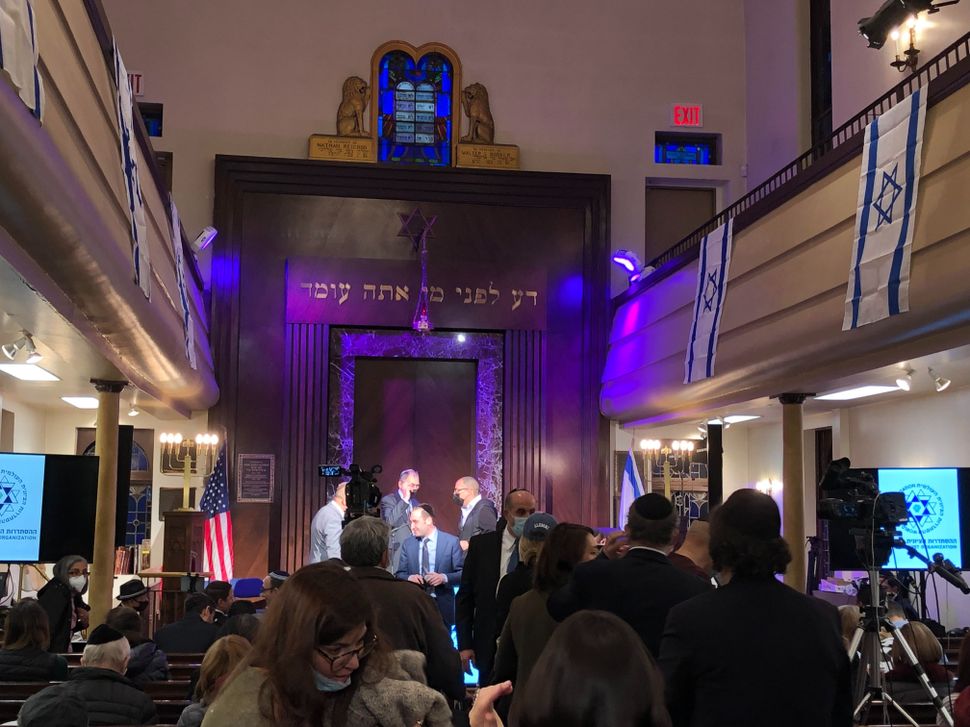 The stage for the 2021 Chidon HaTanach U.S. Finals at Adereth El. Photo by PJ Grisar

When I answered 10 qualifying questions for the world’s biggest Hebrew Bible test, I got exactly one right. But, despite the fact that this is statistically worse than guessing, I was eager to attend the U.S. finals of that same quiz.

Chidon HaTanach, an annual competition that tests scholars on their Tanakh knowledge, hosts contestants from around the world and sends the winners to Jerusalem for the ultimate showdown. Created by David Ben-Gurion, the Chidon is an institution, backed by the World Zionist Organization and known for its raucous quiz bowls for school children.

Though I came to Congregation Adereth El on E. 29th Street in Manhattan to see the adults, I absolutely felt like the kid in the room — and there was an actual baby there.

Imagine sending a cub correspondent to the NBA finals, his only knowledge of basketball having been derived from the feature film “Air Bud,” and you may come within spitting distance of my qualifications vis a vis the competitors. But then, that made the contestants’ knowledge, so confidently recited from the bimah, all that more impressive — though perhaps not quite as impressive as a Golden Retriever sinking a three-pointer. 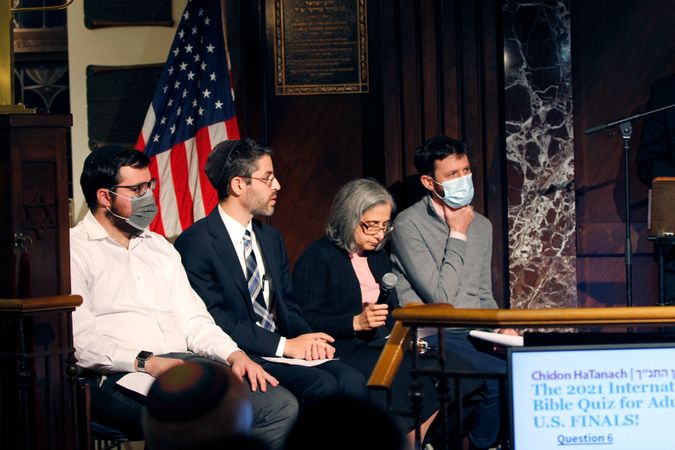 After some hummus and olives in the basement, a crowd of older folks, young families and some college kids, comprising a cheering section for the youngest contestant, a senior at Yeshiva University, filtered into the pews. In the sanctuary, some important people from Zionist organizations gave opening remarks and a cantor sang some odes to Israel to a montage of scenic b-roll that wouldn’t be out of place in a karaoke booth.

The first part of the competition, featuring eight contestants — mostly teachers and one antitrust lawyer — focused on two major themes of the evening: the Coronavirus pandemic and Israel.

Moderator Robert A. Harris of the Jewish Theological Seminary began his questions with some information that didn’t have much to do with Tanakh, but nonetheless emphasized Israeli medical heroics. One such question began by remarking on contemporary Israeli vaccine testing on animals before making a hard pivot to the Pharaoh of Exodus’ immunity to plague. The contestants acquitted themselves well — despite the animal testing non sequitur — with one hiccup, which also appeared to involve a plague and animals.

Harris asked Rabbi Nathan Dweck, a teacher at Barkai Yeshivah Middle School, what a prophet was referring to when he said “For a lion has invaded my land, vastly outcounted with teeth like the teeth of a lion, with the fangs of a lion’s breed.”

After correctly identifying the prophet as Yoel (Joel), Dweck guessed that this lion was standing in for Ashur — or Assyria.

Wait, what? Weren’t we just talking about lions? Apparently Joel’s anecdote about an invasion of locusts — compared here to lions — is sometimes considered a metaphor for an invading army, which could be Assyria. To make it even more confusing, some think the locusts symbolize the enemy’s horses and some Christian interpreters even seem to think Joel’s describing helicopters in a future war. I learned all this after the fact with some Googling.

Dweck seemed somewhat baffled by the locust debacle, and was later awarded the points anyway.

The first part of the first round ended with Avrohom Horovitz, a retired U.S. Army Chaplain born in Manchester, U.K. answering a question about which figure from the Bible was asked “How is it that you look bad, though you are not ill?”

“The person is Nehemia Ben Hacaliah,” Horovitz answered, then breathlessly supplied one of Nehemiah’s sobriquets, explained why he earned it, then offered Nehemia’s response:

“First of all he prayed, that was his first response, and then he said the reason why I look bad and my face is downcast is because” — Horovitz spoke the rest of the verse in Hebrew, emphasizing the broken walls of Jerusalem and desecrated graves of his forefathers.

“That’s probably enough,” Harris concluded. There was no extra credit for the length of the answers.

The following round — in which six contestants were left — dispensed with videos lauding Israeli medical excellence, but introduced sound effects. A gong indicated time was up. A bright chime meant a correct answer. A sound I can only really describe as a sproing meant you got it wrong. Oftentimes all these effects would sound at once as the remaining competitors answered how many proverbs Solomon recited, how many Israelite men were killed by the Men of Ai, and who was told “go in peace, the Lord views with favor the mission you are going on.”

The answer to the last question was “the Levite youth” (specifically, one introduced in the 17th chapter of Judges). Being unschooled in Torah, I was shocked that contestants were expected to identify a character that the Torah itself didn’t deign to name. But then, that’s the Chidon. It’s nothing if not deep cuts, and it’s not for your casual Jew. That doesn’t mean, though, that you can’t become that less casual sort of Jew — you just need a lot of dedication.

“Competing makes you realize how much time there is in the day for doing something that’s important,” 2019 U.S. champion Rabbi Shnayor Burton, a contestant on Sunday and a Torah teacher from Brooklyn — like many of the contestants — told me. “And it makes you realize if you really want to master something, if something’s really important to you, you can do it.”

I’m not quite there. Having remained consistent with my previously established record from the qualifying test, I got just one question right during the competition — out of way more than 10. I correctly identified Jonah as the guy who said “the floods engulfed me.” Because, you know, a big fish swallowed him.

In the end, the contest came down to Burton and Horovitz. From opposite ends of the bimah the two men — Burton lanky and bearded, Horovitz, sturdy, stubbled and rocking on his feet as if davening — fielded a rapid-fire round of questions covering Biblical lineage, quotes from prophets and recorded casualties of war. 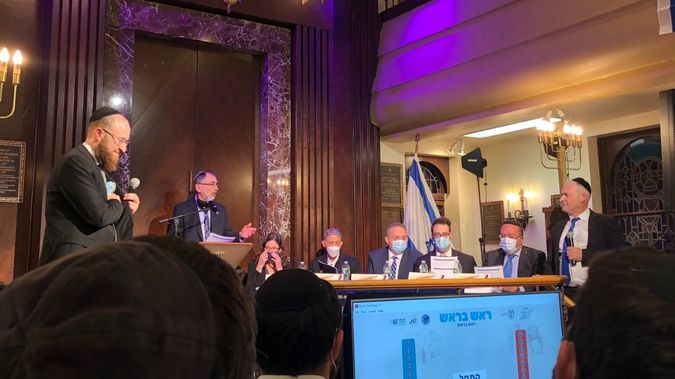 Shnayor Burton (L) and Avrohom Horovitz (R) go toe to toe in the final round. The two competed previously in 2019 — Burton won and went to Israel for the international competition. Photo by PJ Grisar

The final question: Who reinforced the dung gate in Jerusalem? That’s a bit of municipal infrastructure trivia I was not anticipating. The answer was Malchijah.

Horovitz eked out a narrow victory over Burton, whom he competed against in 2019. When I caught up with Horovitz after the competition, he’d changed into his Army uniform. 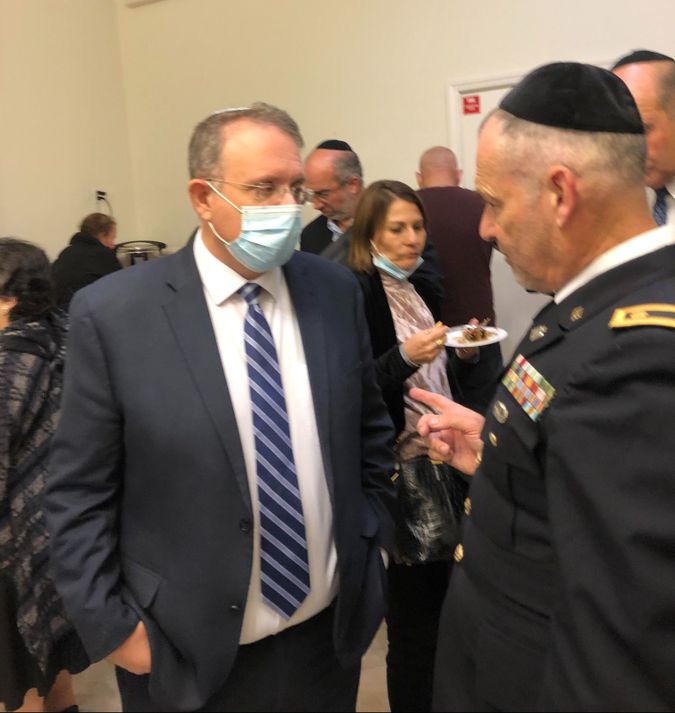 “I’m very nervous whenever there’s a test,” he told me.

When I asked him why he does it anyway, he took a moment, longer than he did for most of the questions in the quiz. “I think it’s one of the greatest things to learn Tanakh — know Tanakh,” Horovitz said. “It’s Hashem’s word, God’s word. I think everybody should be learning Tanakh.”

As I followed Horovitz to the basement, where a spread of schnitzel and kosher sushi awaited, he posed a riddle to a well-wisher. It was about his Army days leaping out of planes.

I know enough to be vaguely reminded of Absalom — another soldierly Jew who got stuck in a tree. Maybe next year, with a bit more study, I’ll get two questions right.