What does the Talmud say about Larry David spilling coffee on a Klansman’s robe? 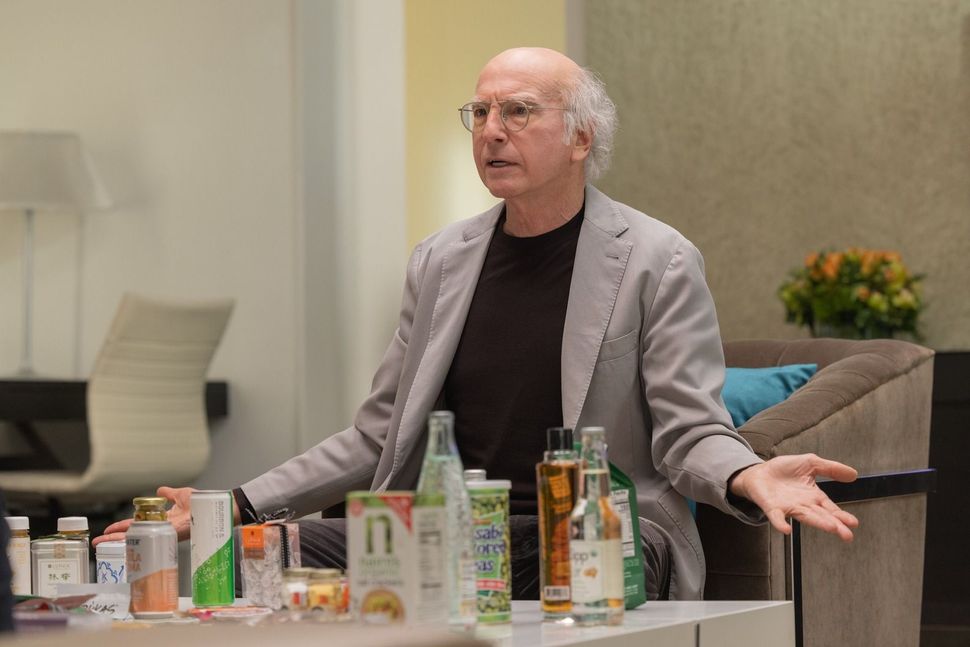 The fact that Judaism has its own vast corpus of legal arguments is of little interest to Larry David — he’s a law unto himself. But every so often his actions give way to a question of Talmudic precedent.

When, for instance, Larry accidentally spilled coffee on a Klansman’s robe on Sunday’s episode and then promised to have it laundered in time for two upcoming “hate rallies” in Tucson and Santa Fe, he stumbled onto an area well trodden by commentators and scholars: property law.

Throughout the episode, Larry explains how he feels obligated to pay for this white supremacist’s dry cleaning, even convincing a Jewish drycleaner to do it, telling him, a la Jesus, that he’s deciding to “turn the other cheek.”

It’s a crazy scenario, at home with Larry’s fearful deployment of a “Heil Hitler” to an antisemitic German Shepherd. But Jewish law is unambiguous about the first part of the predicament: the spilling, where Larry is unambiguously at fault.

“Halacha’s pretty clear,” said Rabbi Mark Wildes, the founder of Manhattan Jewish Experience, an attorney and a self-described “Curb” fanatic. “If you are negligent or you intentionally or carelessly damage someone else’s property, whether it’s your ox goring another ox from the Talmud, or your car smashes into someone else or you spill coffee on someone else’s clothing, you do have responsibility to make the person whole, which means you need to take the item, get it cleaned, or pay for what that cost is.”

But, when Larry noticed the telltale Blood Drop Cross on the robe, thatve should ha complicated things. Wildes says that if the clothing in question is being used for sinful activity — and the Klansman makes it plenty clear that’s the kind of activity he has in mind — the person who damaged it is not responsible for cleaning it. In fact, it may be a problem to do so. You may be facilitating the sin by having the garment cleaned.

“Maybe there’s an argument to be made about finding coats from other Klansmen and spilling coffee on them,” Wildes concluded. “That actually might constitute a mitzvah.”

Chaim Saiman, the chair of Jewish Law at Villanova University, was less sure that the nature of the garment soiled — or the guy holding it — changed the basic facts of the damage done.

“You probably owe him the amount of dry cleaning,” Saiman said, though he acknowledged there are considerations about aiding someone doing “something illicit.”

Jewish law might say the fact that this guy is a Klansman “probably doesn’t excuse you from liability, but it certainly would say don’t go out of your way to facilitate” the illicit action, Saiman said. But then again, if we’re going by First Amendment law, the rally is not necessarily illegal. There’s tons of case law about Klansmen on parade.

The fact that Larry David has prompted a pilpul — or Yeshiva-style dialectic — is only fitting. Saiman once thought to write a treatise on “Seinfeld” and how it resembles the Talmud in its need to codify social norms. (One Talmudic discussion on the Hamotzi blessing, Saiman said, corresponds almost perfectly with an episode where an annoying comedian acquaintance of Jerry’s tries to quibble with whether or not soup constitutes a meal.)

Regardless of the correctness of Larry’s actions vis a vis the Klansman’s dry cleaning, this most recent episode of “Curb” finds our hapless hero performing accidental mitzvot, albeit unconventionally.

For the first time since his near-death experience in Season 5, Larry begrudgingly attends Rosh Hashanah services — the result of a bet over whether the shul’s rabbi can make a hole on the golf course.

This visit leads to Larry blowing a shofar — in the middle of the night, waking up his neighbors. Larry also commissions Susie to sew a new Klan robe that ends up having a Star of David embroidered on the back. (“If you can sew some Stars of David into the Klansman robe, maybe that’ll justify sending it to the cleaners,” Wildes said.)

That Larry quotes some “Fiddler” to the Klansman when talk turns to tradition may also be something of a minor mitzvah. The Talmud appears silent on the issue of getting one’s friend to embrace food they love, but are afraid to eat on account of stereotypes, as Larry also does in this episode, but Larry proclaiming his love of gefilte fish in a grocery store is surely some form of culinary good deed for the Jewish people.

But of course in the episode, Larry still engages in some light lashon hara, telling Freddy Funkhouser that his girlfriend dropped a Pirate’s Booty cheese snack on the floor and didn’t pick it up.

But, cleaning a Klansman’s robe, that’s permissible — in Larry’s law, if not always in Judaism’s.

What does the Talmud say about Larry David spilling coffee on a Klansman’s robe?