What ‘Curb Your Enthusiasm’ taught me about being Jewish 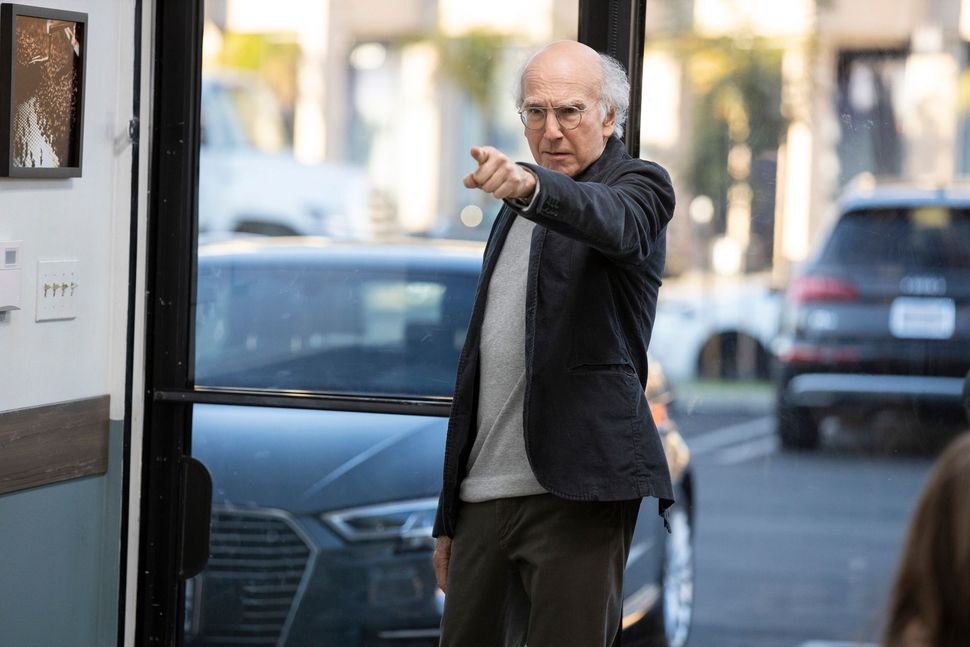 Larry David in season 10 of ‘Curb Your Enthusiasm.’ Image by Courtesy of HBO, Photograph by John P. Johnson

Over two decades, Larry David has incited localized holy wars, disrupted a bat mitzvah and an afikomen search, found God, became briefly Orthodox and then — shortly thereafter — Christian. Recently, he was seen giving a hearty “Heil Hitler” to an anti-Semitic German shepherd. Through it all, he has remained one of the most Jewish presences on television.

David’s fictionalized version of his true, socially brazen persona in “Curb Your Enthusiasm,” which ended its 10th season on Sunday, may seem mercurial. Does he code switch, like a Zelig, a rootless cosmopolitan who camouflages himself to survive? Some say that he is a pariah, the prototypical schlemiel, ostracized for his unwillingness to commit to society’s expectations. I would argue the opposite. David’s capricious way of being betrays a consistency born out of extreme comfort — a comfort that insulates him from his own worst transgressions.

David is an American Jew in that order, and so, he is free to be whatever he wants to be: ignorant of customs, eclectic in sexual desire, fond of Wagner. In 100 episodes, David has shown the world a prime example of the bulk of American Jewry’s ambivalent relationship with itself — he, in fact, showed me myself.

Before anyone outside of Vermont or the Senate thought to draw a comparison between Bernie Sanders and Larry David, my grandfather was mistaken for the “Seinfeld” co-creator at a function in the Hamptons. Instead of a framed ketubah, my parents’ house gave a place of honor to a framed napkin with Jerry Seinfeld’s pre-”Seinfeld” signature. I grew up on “Seinfeld.” but I came of age with “Curb.”

In “Curb,” I, like so many American Jews, saw an extension of Borscht Belt subversiveness and the ongoing Talmudic debate over how to live according to a code — albeit an extremely petty one. But the show is perhaps most revolutionary in the way it explores how a Jew operates in different spheres.

While Larry’s world is de facto Jewish — most of his friends are Jews, though his wife and later ex, Cheryl (Cheryl Hines), is not — his position in society allows him to float freely and feel at ease anywhere. This means with his live-in family, the Blacks (who are, well, black and displaced by Hurricane Edna); with all manner of Hollywood A-Listers; but also his coreligionists to whom he feels a kinship and also a derision.

He is no longer the angsty, cab driver David who famously owned only one plate in his Hell’s Kitchen apartment. He’s rich now. This is a David unbound and emboldened, free to slink off his neuroses and insist on a different social order, often at the intersection of clashing cultures. He shows the progress not just of David then, but of American Jews writ large. If we were once siloed in our own cultural tenements, we have since become the shapers of the culture, less parochial than ever before.

How Jewish is Larry? It depends. When he bumbles his way into saving a Jewish man from a baptism, he is a hero to his landsman — if only by accident. When he falls in love with a “Palestinian chicken” place, he seductively tells a server there that he’s a “big, big Jew” as a means to get in bed with her for hate sex. Once in bed, he relishes the anti-Semitic and anti-Zionist slurs she throws his way mid-coitus. In that same episode, he mocks his friend, Marty Funkhauser (the late, great Bob Einstein) for his recent spiritual awakening, evidenced by his kippah. But, when Larry learns that pretending to be Orthodox could be advantageous — to get in good with a guy who can secure a kidney for his lifelong friend Richard Lewis — he fakes his way through it, slapping on a yarmulke, speaking pidgin Yiddish and, along the way, betraying his baseline ignorance of halacha.

Larry nails a mezuzah to a door to please his father — with a prop nail from “The Passion of the Christ.” Perhaps this is a good metaphor for his irregular WASP aspirations, as, when Larry falsely believes his biological parents are gentiles, he’s thrilled at the news, immediately assimilating by donning a cowboy hat and fanny pack.

Larry David, then, is extremely Jewish in that he is like most American Jews — at once proud, and yet, discomfited by his Judaism. His cultural understanding is vast, but his knowledge of Yiddish doesn’t go beyond “schlep” or “kvell.” He wouldn’t know the first thing about how to keep a kosher home, but, after a near death experience, decides to go to Temple for the high holidays. It should be noted that his high holiday attendance, the Christ nail fiasco, his fake orthodoxy and fake gentility are all in Season five — arguably the most Jewish season (it also has a Seder episode).

That one season, which hinges on David’s mortality, paternity and the question of whether he will gift a vital organ to a friend, struck something close to the life cycle of many secular Jews: Our dalliances with faith, our bewilderment in the face of our own fathomless tradition and some of our uneasiness at being outside the mainstream, even as we advance as a people.

The final episode of season five, evokes a core contrast between a Christian worldview — one, David believes, of bold unconditional charity (read: a kidney) bolstered by a belief in heavenly redemption — and Jewish fatalism and hypochondria. It’s only when he believes that he was a gentile the whole time that his demeanor shifts and he happily agrees to save Lewis’ life with no regard to the dangers it poses to him.

The episode ends with David being transported to heaven — he died while giving his kidney to Lewis. He receives a full head of hair, perfect vision, and learns that at least two heavenly beings are Jewish (or at least played by Dustin Hoffman and Sacha Baron Cohen). There he meets his late mother (Bea Arthur), who immediately calls him a schmuck for donating his kidney and scolds him for appearing to enjoy learning he was adopted. David is eventually kicked out of the hereafter for being too annoying, arguing with his guardian angels about the best way to organize ones DVDs. He’s bullheadedly trying to correct the world even in the world to come.

How could he, for even a second, believe he was Christian?

That episode is actually titled “The End,” and the show might well have ended there instead of going on for five more seasons. But David continued to add more texture to his profile of Jewish life. This season, he claimed a girlfriend was Jewish to get Susie (Susie Essman) to like her a bit more and inspired Jewish celebs to engage in a spite-fueled competitive retail campaign. Last season saw him presenting pickle-related injuries and accidentally realizing that his conduct fits the letter of fundamentalist Sharia law. He once had deep misgivings about his lawyer — a guy named Berg — when he learned he wasn’t a member of the tribe.

Through his travails, David remained, more or less, unscathed. Any financial difficulty, end to a friendship or even fatwais temporary. He does not, like the protagonists of “Seinfeld,” end up in jail, and that is a testament to yet another thread of Jewry, both contemporary and historic: resilience. His story is one of survival, but only in the sense that he’s made it and continues to.

What did David show me then, when I was at a ripe, high school age? More than Mel Brooks, Philip Roth or my own lapsed membership at shul, he revealed that Jewishness, even at its most assimilated and fluid, is still a marker of difference. And that difference — that impish inspiration to challenge orthodoxy or insist on a better way — is a heritage unto itself.

In a season four episode, when Larry makes the case that he can pass as a WASP to get into a country club, Susie tells him his “Jewface” would stick out like “a sore thumb.”

It’s true, and Larry knows it. Sometimes, that comes with some shame, sometimes with pride, but, most times, the condition of being Jewish can best be summed up with Larry’s own words: “Eh.”

What ‘Curb Your Enthusiasm’ taught me about being Jewish