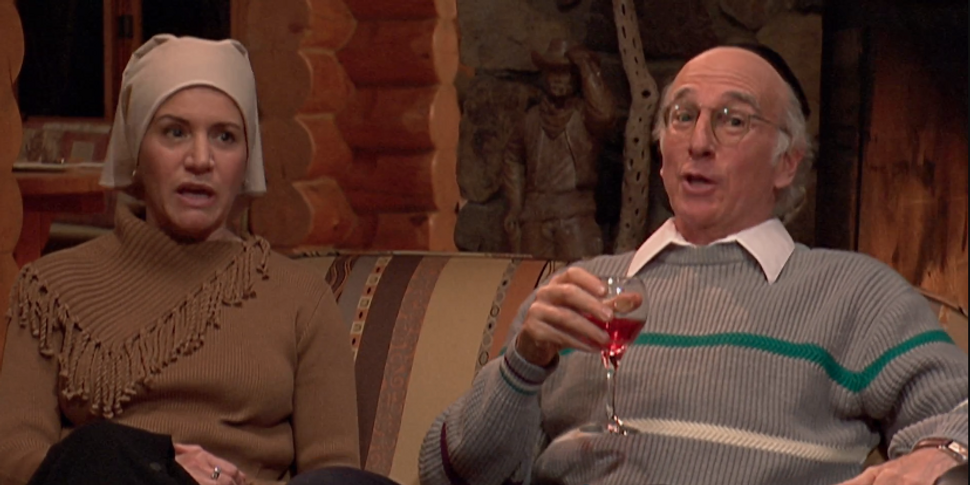 “Hey, I may loathe myself, but it has nothing to do with the fact that I’m Jewish.”

This Sunday night, the long-awaited ninth season of Larry David’s “Curb Your Enthusiasm” is set to premiere. Though “Seinfeld” was once viewed as the show for Jews, its Jewishness was largely coded; the show never even confirmed George Costanza as Jewish. “Curb Your Enthusiasm,” on the other hand, is so aggressively Jewish that you can’t help but feel more Jewish yourself. “Curb” is the grand culmination of decades of Jewish-American humor borne out of Yiddish theater, and has matured through the likes of Woody Allen and Mel Brooks.

Let’s break down the show into several components:

1.The character of Larry David

Where else to start but the most Jewish character in the most Jewish show? Everything that defines the character of Larry is utterly Jewish, and it begins with his general role: pariah. As David Gillota describes, Larry epitomizes the schlemiel found in traditional Yiddish stories who often alienates himself in the name of resisting social and cultural values and norms. “As a true schlemiel, Larry’s failure serves as a direct challenge to the status quo and encourages viewers to question the myriad unwritten rules that we follow in our everyday lives,” Gillota says. When he refuses to sing happy birthday because he thinks it’s a stupid song, Larry is the champion of the people we never asked for (no, really). Larry embodies the struggles of the Diaspora Jew — one who holds fast to beliefs and values, even if the contradiction of norms (inevitably) risks making him an outcast.

Beyond his (likely unwitting) homage to Yiddish traditions, Larry displays all the stock negative characteristics of a Jewish man — his self-deprecation, self-hatred, frugality, hypochondria, endless complaining, the occasional emasculation at the hands of a domineering Jewish woman and, oh, yeah, he looks really damn Jewish. Though self-loathing, however, Larry never disowns his Jewishness — it defines him in this world.

2.Larry’s web of friends and foes

Susie: “This Jewface would stick out like a sore f***ing thumb!”

Larry: “I’m much more gentiley than you are!”

The world of “Curb” is so Jewish it barely resembles reality to goyim, but all that griping makes us Jews feel so at home that we can smell Aunt Ruth’s slightly overcooked brisket. While Larry typifies the stock Jewish male — and his wife, Cheryl, the shiksa — Susie is the archetypal Jewish mother who rules the roost at home, shredding Jeff and Larry to pieces with a stream of four-letter expletives in some combination with “bald” and “fat.”

But she’s just the tipping point. There’s Larry’s oldest friends, Richard Lewis (who Larry met in real life at summer camp) and Marty Funkhouser (repeat that name to yourself). Or his season 4 collaboration with Mel Brooks to star in “The Producers” — a cornerstone of Jewish- American comedy history. It’s not simply the many Jewish actors and plot lines, but the bickering, the melodramatic suffering, the thick New York accents that saturate the show. (Real-life) Larry David once explained:

There is a certain rhythm to the way Jews talk that might be funny…there’s like a jazz to it. Like when you listen to Lenny Bruce’s albums, there’s a jazz to the way he talks. The culture of Jews being funny comes out of — I guess — some kind of oppression. Because oppression would lead to humor, would it not?

3. The dialectical nature on “Curb” of humor and its use of wordplay and irony

Larry: “Mmmmh no. Not really.”

Larry: “If you’re gonna laugh out loud, why aren’t you laughing out loud? Why say it? Why not just laugh?”

Ilene: “I am laughing! That’s what it is, that’s me laughing.”

Most “Curb” scenes entail Larry ruining a normal interaction by refusing to concede on a trivial matter. Larry’s arguments are always based in some train of logic which is often valid — but absolutely inappropriate or insensitive. Larry’s rhetorical battles against common sense descend from the deductive reasoning found in Talmudic scholarship for centuries.

The wordplay and irony in “Curb” follow a long tradition of similarly structured Jewish comedies, and he never disappoints. The stop and chat. The chat and cut. Koufaxing. Every episode has its own dictionary. Language is Larry’s playground to express his disdain and bewilderment in his unique way. If you have the less deadly form of Hodgkin’s, from Larry’s Diaspora viewpoint, that must be “The Good Hodgkin’s.” These word motifs are sprinkled throughout “Curb” to serve as the backbone for an episode’s general structure: Larry commits a social sin, pisses someone off and ultimately pays for it in some ironic conclusion having to do with that play on words.

4. Incorporation in “Curb” of Jewish tropes, events and issues

“Do [Holocaust] survivors like seeing each other? Do they like to talk about old times? Or does the sight of another survivor depress them? I guess if I was a survivor I’d want to see someone. Yeah, I’d want to talk about — well, that’s the thing…”

For someone who shrugs his shoulders at God, Larry David has managed to utilize seemingly every Jewish religious holiday or milestone for the sake of comedic mayhem — inviting a sex offender to Seder, scalping High Holiday tickets, ruining bat mitzvahs, Marty Funkhouser “Koufaxing” on golf during the Sabbath, completing a minyan with Bill Buckner… Larry even receives a rabbi’s blessing to have an affair (with his wife’s permission). Like the Jewish-American comedians that preceded him, Larry David transforms the Jewish religion into a cultural institution.

Larry’s needling of everything Jewish bleeds into greater issues of Jewish-American identity, but in those small ways that Larry likes to nitpick about. He tries to fit into a WASP-y country club by lying about 1. owning a hummer, 2. his love of Ronald Reagan, and 3. how “polo was his game”. But this Jew struggles to even relate to other kinds of Jews. In “The Ski Lift,” the cultural divide of secular and Orthodox Jews comes to a head when Larry attempts to woo an Orthodox man by speaking gibberish Yiddish and lying how he met his “wife” Susie at a Hillel mixer when he was in a band that played Jewish folk songs like “Gefilte Fish Blues” and “My Freakin’Back Is Killin’ Me And It’s Makin’ It Hard To Kvell.” No matter where he is or who he’s with, Larry is a stranger in a strange land.

Israel, intermarriage, occupational expectations, assimilation, religious and ethnic identity in a diverging world — the struggles of Larry David are our own. Building on past luminaries like Groucho Marx and Lenny Bruce, this miserly man offers a hilarious reckoning with our historical oppression and the neuroses and idiosyncrasies it has wrought.