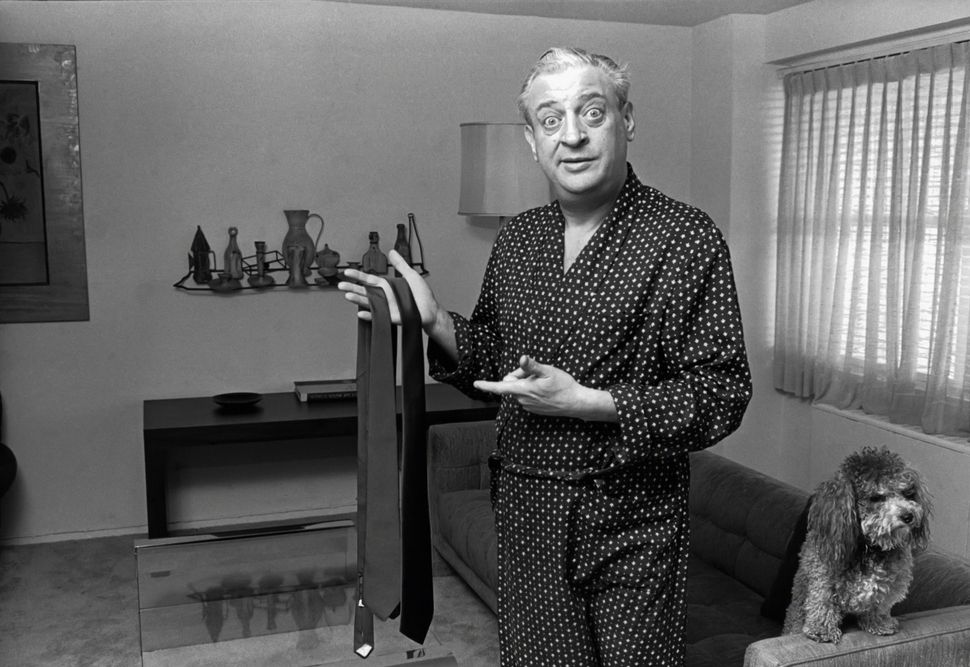 Rodney Dangerfield with his pet dog Courtesy of Getty/Images Press

Rodney Dangerfield has my respect — and continues to inspire my sandwiches.

The comedian, who would have turned 100 today, and made a career playing a lovable schlub in films like “Caddyshack” (and once an animated dog version of himself) is not always my cup of tea. His signature jokes about his wife — a regrettable Borscht Belt staple — don’t do much for me. But his sandwich-making ability remains unmatched.

To my mind, the greatest Dangerfield moment is in 1986’s “Back to School.” The film’s basic plot, which is much the same as 2000’s “An Extremely Goofy Movie” and 2018’s “Life of the Party,” is that Thornton Melon (Dangerfield), a self-made titan of industry and son of immigrants, enrolls in his son’s college and attracts the ire of the dean. Along the way Melon attracts the fascination of wealthy partygoers by crafting a sandwich from various hors d’oeuvres at a fancy function.

He slices a loaf of bread — gutting it of much of its internal gluten to make a reservoir — and crams in some Swedish meatballs, spanakopita and devilled eggs. “I hate small food, y’know,” Melon, born Tony Meloni, quips to the camera. He later says he “learned this in Europe.” But did he truly?

Allow me to get lofty here about this uncouthly-assembled sandwich. For me, it is not just a sandwich, but a legacy. Dangerfield is at his best in this scene, playing a nouveau riche gent whose street smart life hacks enhance the finer things. The sandwich tells a story of Dangerfield’s generation, who came from nothing and earned their spot at the table their own way, leveraging prejudice and quotas to their advantage, finding possibility and innovation in the gaps of opportunity.

It’s not hard to imagine a sandwich like Melon’s being birthed at the Hillcrest Country Club or at Kutsher’s, but it’s so much better to see him making it among the gentry who, but for their own sense of arbitrary decorum, might have found their way to it eons ago — or whenever Swedish meatballs made their way stateside.

Is the sandwich any good? Well, when Andrew Rea of the “Binging with Babish” YouTube channel made it he pronounced it “pretty great.” But even if it wasn’t, I’d still celebrate the inventiveness behind it. It’s personal.

After my sister’s wedding, my aunt’s boyfriend pulled me and my cousins aside to advise us on how best to work the buffet at the hotel. His proposed mishmash involved toasting bread, melting cold cheese and getting a bit of everything in one bite. No “small food,” just a big idea of how to work with what we’re given.

He may have been knowingly channeling Rodney Dangerfield — or he may have just been being Jewish.