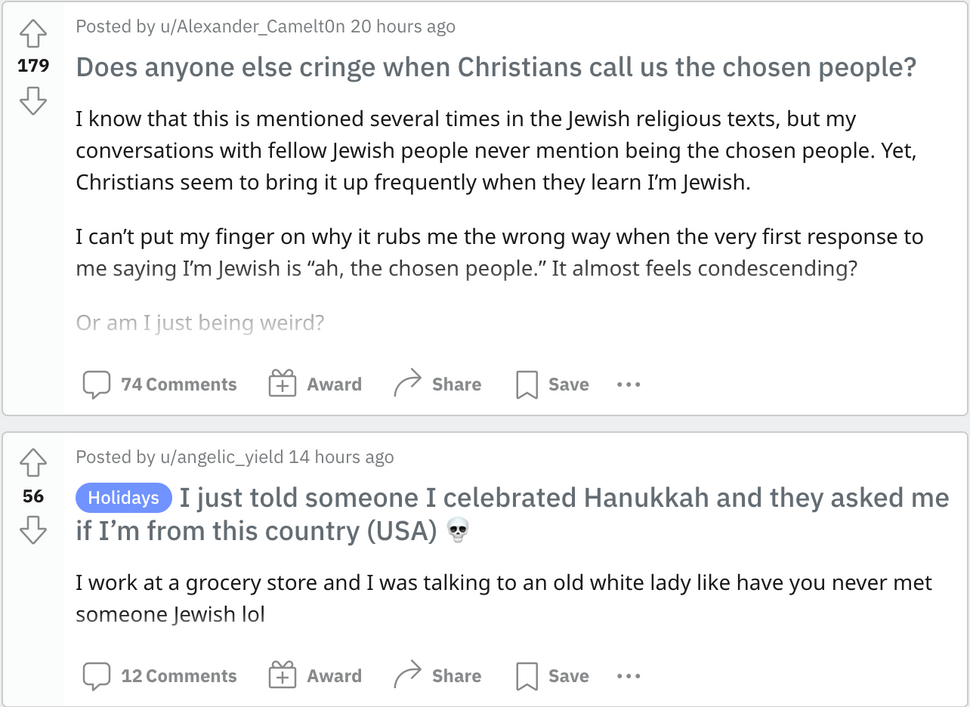 A screenshot from Nov. 23 shows two popular posts on r/Judaism. The number to the left of each post shows how many times each post has been up-voted by forum visitors. Image by Louis Keene (via Reddit)

If there’s a path out of the polarization, shaming and judging among Jews, it would take us to the Promised Land, right? Sometimes it feels as if we’re already there on r/Judaism, a forum on the social media platform Reddit that’s by Jews, for Jews — and open to anyone curious.

Compared to Jewish life elsewhere on the internet — dispersed and fenced off — it’s a breath of fresh air, a Big Tent that actually covers everyone.

Of course r/Judaism isn’t completely free of nasty exchanges. But it’s designed to keep those at a minimum, with rules that forbid politics and clickbait and a team of moderators who intervene at the first sign of trouble.

On any given day on r/Judaism — the page’s official name is “A Rabbi Walks Into A Bar” — you might find a secular Jew seeking guidance on praying for a sick relative, a funny meme about the week’s Torah portion, and a Messianic Jew answering questions in Ask-Me-Anything format, interspersed with links to Jewish news and cultural items, all submitted and up-voted by Reddit users.

People visit the page for any number of specific reasons, but for one main one: to talk to Jews across the spectrum of Jewish life. And what better place to look? A recent survey revealed the breadth of participation among the thousands who frequent the Judaism forum, called a “subreddit” in site parlance. They include Orthodox Jews and atheist Jews; Jews of color and Jews by choice; boomers and zoomers; Jews from all over (and Jews from Down Under).

Created 13 years ago and now with about 67,000 subscribers, r/Judaism is not as big as the biggest Jewish Facebook groups — ”Jewish Humor” has more than 160,000 followers — but it’s bigger, more open and more interesting than most online Jewish spaces.

“We’re very community oriented,” says Andrew Lillien, a business intelligence analyst who moonlights as one of the group’s nine volunteer moderators. “I recognize some names from 10 years ago that are still on, and some names from six months ago that are new. Some people are part of the community for so long that it has a deeper feel than a one-million person or five-million person Facebook group.”

Outsiders, too, come in good faith. “Spending Hanukkah with my boyfriend and his family. I’m not religious,” reads a November 23 post from KingSpartan2145, a user who was raised Roman Catholic and wondering what to wear. Dozens of comments poured in: “Hanukkah is not like Christmas. It’s casual,” one user advised. “Don’t blow out the candles,” warned another.

The old adage that for every two rabbis there are three opinions might still hold on the subreddit. But as far as I can tell, this bubbling cholent of Jewish life is more civil than the actual cholent line at your synagogue. Even in discussion threads about Jewish conversion or halachic observance, an atmosphere of acceptance prevails.

As for those who try to make r/Judaism more contentious than its rules allow, there are minders. The most common violation, moderators say, is of the page’s first rule — “Don’t be a jerk.” Bad actors also post hate speech on the page, which can be detected and automatically removed by the page’s tenth moderator — a bot that scans each post for offensive content.

And occasionally someone will try to proselytize to Jews on the platform.

“They try so hard to be subtle,” Lillien says with a laugh. “I give them an F for effort.”

The page’s newest rule might be most responsible for keeping conversation “on the derech”: No Politics. That means no Trump, no Israeli-Palestinian conflict, and no BDS in the links or the comments.

Such a rule might make it hard to reproduce the forum’s friendly confines in real life. Those topics don’t go away, or become less important to Jewish people, just because they aren’t talked about here. And it’s possible that this public square would be the safest for constructive conversation about them.

But the rule has been popular since its introduction in 2018.

The moderators do make exceptions, however — there were discussion threads on the Gaza-Israel war in May. The topic had generated so much interest “we had to put a couple threads up about it,” Lillien said.

But he is disgusted by most political discourse online. “It’s toxic, it’s vile, it grosses me out half the time or more than half the time. I think mostly the sub appreciates that we don’t allow it.”

It’s also an r/judaism forum faux pas — though some people do it anyway — to decry antisemitism occurring elsewhere on Reddit, a site with 52 million daily users and nearly 3 million subreddits that aspires to be “the front page of the Internet.” (There’s another subreddit, r/AntiSemitismInReddit, for that.)

Like the page’s subscribers, the moderators are a diverse bunch — IT workers and English teachers, urban and rural dwellers, observant and secular. One moderator who lives in Israel helps the forum run around the clock; the rest live in the States. All they’re missing is a rabbi.

But there are quite a few among the 200 or so users on r/Judaism at any given moment (a metric described on the page as users currently “Talking In Synagogue.” Users who submit proof of their ordination are granted “flair” (a tab beside their user handle) that indicates them as such on their posts. Twenty-five of the 1,470 survey respondents said they had smicha. Otherwise, the rabbis have the same authority as other users. (And when someone asks a question too intricate for group discussion, a moderator will usually suggest the user take it to a rabbi offline.) 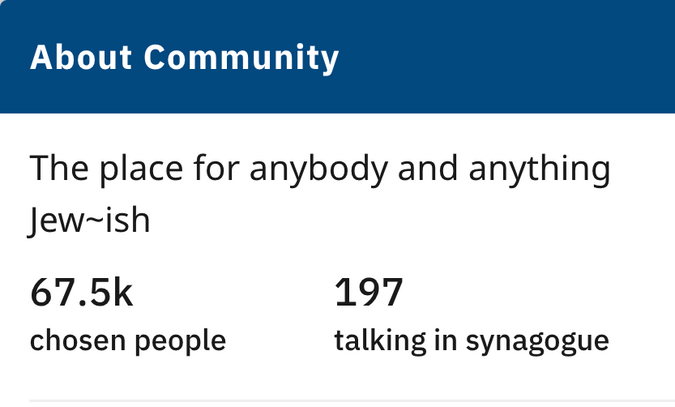 Reddit r/Judaism’s homepage lists the number of total subscribers (referred to as “chosen people”) and current active users (“talking in synagogue.”) By Louis Keene (via Reddit)

The r/Judaism subreddit fosters a kind of dialogue that other Jewish settings foreclose upon. A Reform Jew might never be inclined to go to an Orthodox synagogue because of the mechitza, and vice versa. But on Reddit, everyone is in the same room, and posting anonymously, which seems to precipitate vulnerability and honesty more than it does venom.

Wondering whether a utopian Jewish internet can become a model for Judaism in real life might be a moot point. A tame but meaningful Jewish discussion board, where the shibboleths of a 4,000-year-old religion can be taught, debated and riffed on, is achievement enough.

“You can’t give someone a hug online. You can’t punch someone online. But your words have real effects,” said Lillien, who has been moderating the page for more than a decade. “People really interact with each other. They share their desires, their feelings, their hatred. It may not be the same as real life, but it certainly counts.”