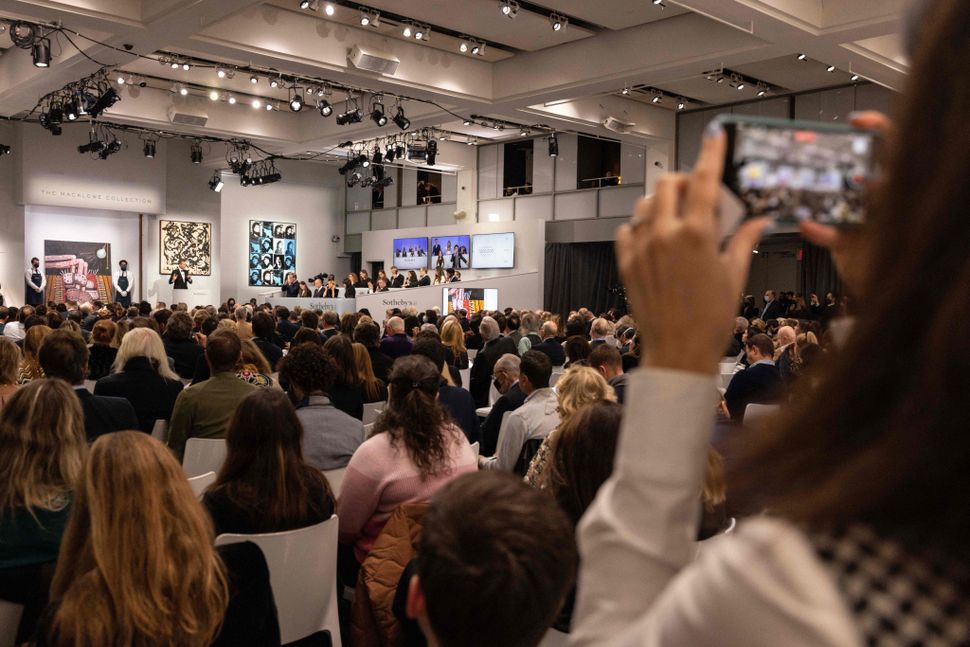 Going Once: Auctioneer Oliver Barker leading an auction of The Macklowe Collection, at Sotheby’s on November 15, 2021 in New York City. Image by Getty Images

The $676 million that Harry and Linda Macklowe’s art collection brought at auction was, according to a quote from Sotheby’s in The New York Times, “the most valuable single-owner auction ever staged.”

Amid the jubilation, only one voice suggested something was off. Art collector and gallery owner Adam Lindemann sized up the collection, distinguished by the works of such legendary mid-20th century artists as Jackson Pollock ($61.2 million), Mark Rothko ($82.5 million), Willem de Kooning ($23.3 million for “Untitled XXXIII” and $18.9 for “Untitled IV”), Alberto Giacometti ($78.3 million), and Andy Warhol ($33.8 million for “Sixteen Jackies” and $47.3 million for “Nine Marilyns”) as that of “a generation that is passing — the collection of an old white man.”

The language Lindemann used allowed him to talk about the Jewish Macklowes without mentioning the role of Jews in the art world, even though he himself is Jewish. Such avoidance is not exactly unusual. Twenty years ago, art historians Matthew Baigell and Milly Heyd observed that Jewish historians of modern art “tended to omit Jewish references about either themselves or their subjects.” The Macklowe collection does belong to a generation that is passing, but it is not that of old white men. Instead, it is a sign that the golden age of Jewish American art collecting may be over. 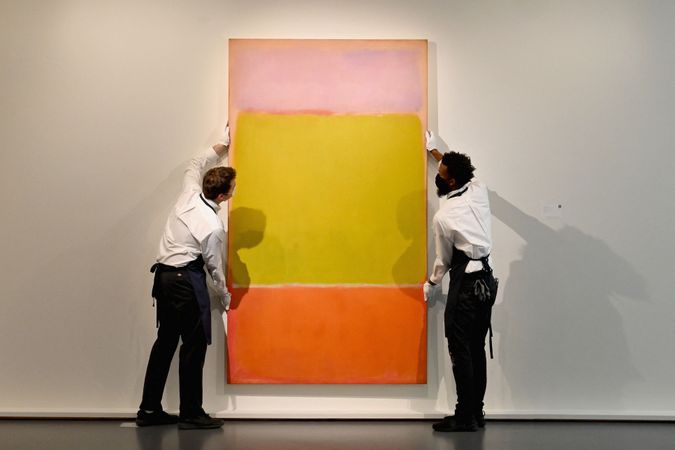 At Sotheby’s: Art handlers hang Mark Rothko’s “No. 7”, part of The Macklowe Collection. By Getty Images

Jewish buyers supported Rothko, Pollock, de Kooning, Warhol and others during the postwar years when abstract expressionist and Pop art were new and controversial. Art dealer Ivan Karp noted that, in the late 1950s and early 1960s, non-Jewish buyers of avant-garde works amounted to no more than “a handful.” Ben Heller remembered that few people of any stripe “were crazy enough to want to buy, to commit themselves” to the new art. But most of those crazy people were Jews.

Heller was one of them. In 1954, after much agonizing, he bought a Rothko for more than his $1,000 limit after the artist made a comic argument Heller could not refute. “’Look, it’s his misery that he has to paint this kind of painting,’” Heller said, recalling what Rothko told him. “’And it’s my misery that I have to love it, and the price of the misery is $1350.’’ I said, Sold!”

In the mid-1950s, attorney David Solinger, investor Roy Neuberger and real estate developer Alexander Bing formed the Friends of the Whitney to raise money for the financially struggling museum and steer it toward new American art. In 1961, they took control of the Museum’s board.

“The new trustees were nearly all Jewish, if not all Jewish. Did that have any impact on the Whitney?” an interviewer asked Solinger.

It sure did. As Solinger explained to another interviewer, the Whitneys were “not with it and they don’t want to be with it.” The Jews, on the other hand, were and they gave the museum “a boldness, an audacity,” and made it a sanctuary for the radical art of de Kooning, Pollock, Helen Frankenthaler, Franz Kline, Robert Rauschenberg and more. 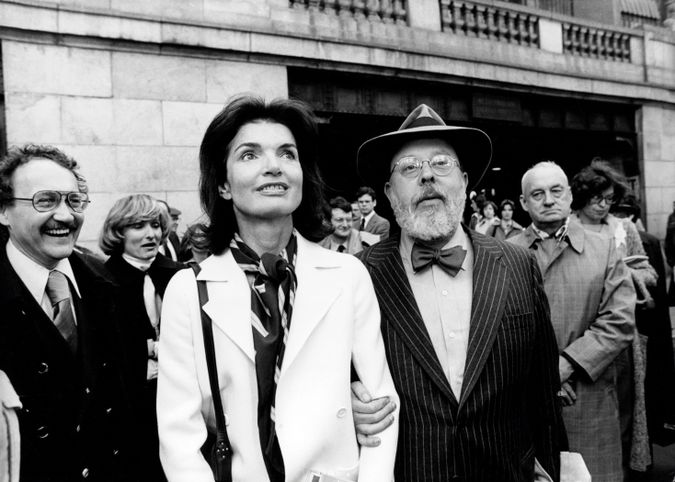 In Los Angeles, Irving Blum’s Ferus Gallery was supported largely by the Wiseman, Hersh and Gersh families as well as Betty Asher. And in Chicago, according to dealer Richard Feigen, all contemporary art collectors were Jewish save for one or two exceptions.

In 1962, Gertrude Kasle was a partner in a gallery that introduced contemporary art to Detroit, despite her friends’ protestations that the city wouldn’t be interested. In 1964, Felice Wender fought the same sort of perceptions when she opened her Gallery-12 in Minneapolis. And, in 1962, Audrey Sabol outdid nearly all her contemporaries in any city when she arranged for the Arts Council of the Philadelphia YM-YWHA to present Allan Kaprow’s “Chicken Happening,” an outrageous spectacle that, according to the Jewish Exponent, featured “an impressive cast of live and frozen, plucked and unplucked chickens.”

Given this Jewish landscape of art patronage, in the early 1960s, Henry Geldzahler was the perfect choice to lead the Metropolitan Museum’s effort to acquire contemporary art. Geldzahler was five in 1940 when his family fled Nazi Europe for New York and, starting at age 13, his parents sent him to Hebrew-speaking summer camps to deepen his Jewish identity so he could inhabit it without ambivalence or embarrassment. This helped his career. “Most of the great collectors of contemporary art are Jewish,” he told the Smithsonian’s oral history project. “It’s natural to have a Jew as curator of contemporary art because he has to deal with the collectors We can make little jokes; there are certain assumptions of humour (sic) and of background and so on that you take for granted.”

The special ingredient that emboldened Jewish collectors to buy the new art and that seems absent from the Macklowe collection was a disregard for conventional good taste. Jews went their own way and trusted their own instincts, however much those instincts clashed with accepted standards. The enormously influential art critic Clement Greenberg practically demanded that new art be ugly.

“By ugliness,” art critic Max Kozloff explained, “Greenberg means some unexpected optical awkwardness, or even grossness, without whose presence safe taste is not vanquished.” 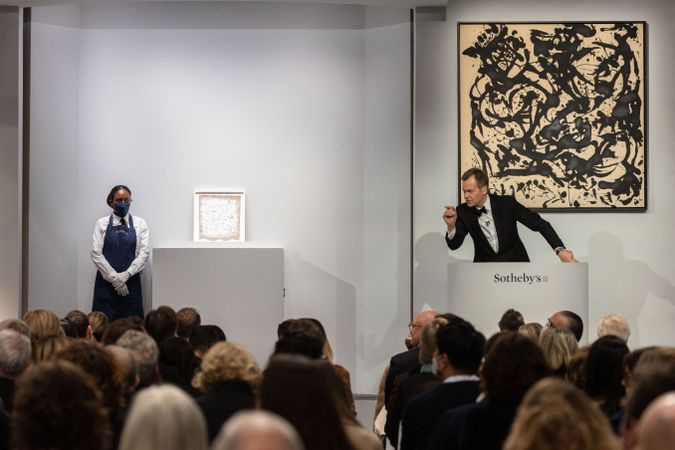 Untitled: Auctioneer Oliver Barker leads an auction of The Macklowe Collection, alongside Robert Ryman’s “Untitled” at Sotheby’s on November 15, 2021 in New York City. By Getty Images

Geldzahler titled one of his talks, “Taste But Not ‘Good’ Taste.” Art collector and roughneck taxi baron Robert Scull was born to offend. In 1960, he was the first to purchase Mark di Suvero’s sculptures, and even six years later critic Hilton Kramer recognized that what made di Suvero great was that his works “lie well beyond the perimeter of taste.” In 1986 in Arts magazine, Robert Pincus-Witten was one of the first critics to publicly discuss the importance of Jewish art collectors. Their special gift, he wrote, “is that consensus ‘good taste’ is an empty question for them.”

It is not clear that this was an empty question for the Macklowes. They bought their postwar masterpieces decades after they were created, when the artists had become uncontroversial brand names. The couple purchased their 1951 Pollock in 1999 and Rothko’s 1951 painting, “No. 7” in 1987, 20 years after Rothko realized how the market for his paintings had changed. “People now are coming and I don’t know whether they want to buy a Rothko or they want to buy the particular painting,” he told Ben Heller in the 1960s. “Whereas with you, you were crazy and I knew it.”

There’s no reason to doubt that Linda Macklowe, widely credited for creating the collection, sincerely loves the pieces in it. Forty years ago, the Times praised her for co-curating “a really extraordinary show of outdoor sculpture,” at Wave Hill in the Bronx, and nearly 50 years ago in January 1967 the paper noted that she already had a collection of abstract art at home. Perhaps in those early years Linda Macklowe was as “crazy” as Heller and a brave and pioneering collector.

But it took more money than madness to build the collection the Macklowes just sold. If this means Jewish Americans are now so acculturated to their surroundings they no longer possess a taste that goes against good taste, then groundbreaking young artists will need to look elsewhere for customers.