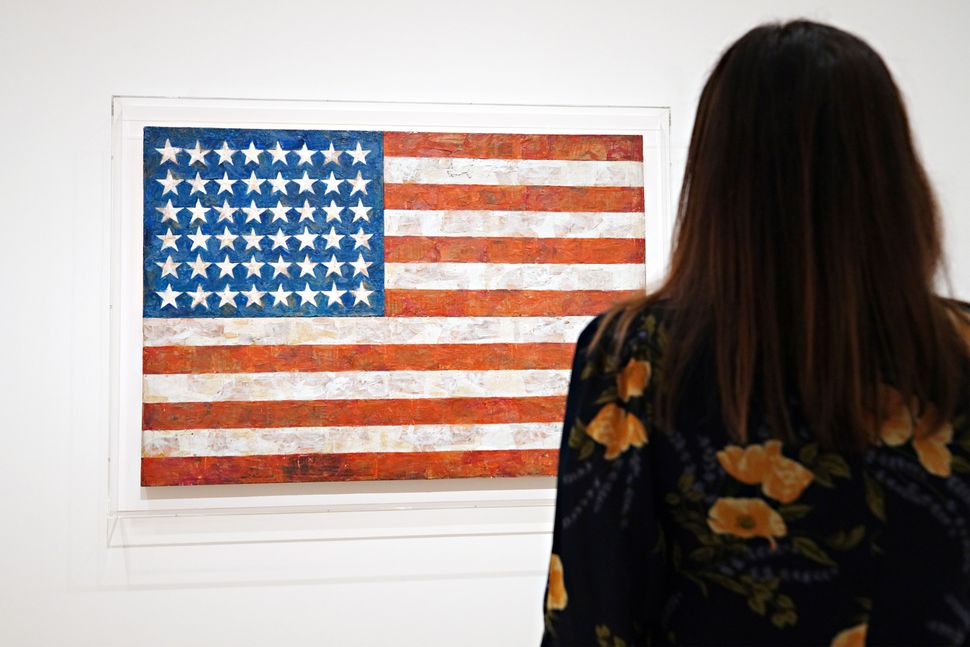 Jasper Johns’ ‘Flag’ The Sculls were major collectors of the work of Johns, whose painting is seen on display during a press preview of MoMA’s first ever Fall Reveal at Museum of Modern Art on November 13, 2020 in New York City. By Getty Images

As two exhibitions in Philadelphia and New York showcase the seven-decade career of America’s greatest living artist, 91-year-old Jasper Johns, two new histories have arrived, revealing the crucial role that has been played by Jewish art collectors, “The House of Fragile Things: Jewish Art Collectors and the Fall of France”and “Belonging and Betrayal: How Jews Made the Art World Modern.”

The books and exhibits share little common ground, except for the patch occupied by the almost clairvoyantly successful art collector Robert Scull. In the 1950s and 1960s, Scull’s unabashed Jewishness and ravenous appetite for works by Johns and other new artists made him famous, rich and despised.

With the financial help of his wife, Ethel, Scull began by collecting the abstract expressionist art associated with Jackson Pollock’s drip paintings and the slashing brush strokes of Willem de Kooning. Scull tried and failed to buy a Pollock, but by 1958 the couple owned two de Koonings, and in 1959 they bought Mark Rothko’s “White Center.”

In the late 1950s, a cadre of young artists were headed in a new direction that would soon be called Pop. New York’s Jewish Museum tapped art historians Meyer Schapiro and Leo Steinberg and critic Clement Greenberg to display the new art at the spring 1957 show, “The New York School: Second Generation.” Among the nearly two-dozen artists were Johns and Robert Rauschenberg. The two became giants. New York art dealer Leo Castelli, who guarded the secret of his Jewish origins as if he were a Marrano, discovered Johns at the Jewish Museum and in 1958 gave the artist his first one-man show. The following year, Scull bought Johns’ “White Numbers,” joining a very select and small club of Johns’ collectors that included the founder of IBM and David Rockefeller.

After the Johns purchase Scull became avid for the newest, most confounding art he could find. He swiftly followed up with Rauschenberg’s “Thaw,” a collage of newsprint and paint, and sculptor John Chamberlain’s “Zaar,” a scrap metal work so odd the Martha Jackson gallery kept it in the basement where it wouldn’t scare off potential customers. But Scull had a special hunger for Johns. In early 1960, when Castelli held the artist’s second one-man show, Robert bought eight pieces. (He wanted to buy everything, but Castelli told him it would be vulgar.)

That kind of exuberant spending established Scull as a major collector, and in the spring he and Ethel hosted a birthday party for Johns attended by artists de Kooning, Rauschenberg and Franz Kline, dealers Castelli and Sidney Janis, and Museum of Modern Art curator Dorothy Miller. In 1961, Johns gave 13-year-old Jonathan Scull a small art piece as a bar mitzvah gift.

By May 1963, when New York’s Museum of Modern Art, Guggenheim, and Jewish museums held overlapping exhibits of Pop artists, all three museums displayed works loaned by the Sculls. Their collection explains why the museums came calling. That month, MoMA conducted an inventory of the art in the Sculls’ Fifth Avenue apartment and found 47 pieces, not counting the nine works on loan. There were 11 by Johns — more than any other artist — six de Koonings, and assorted works by such artists as Claes Oldenburg, Philip Guston, George Segal and James Rosenquist. In late 1963, Andy Warhol completed “Ethel Scull 36 Times,” his first commission and a groundbreaking Pop portrait.

Though the Sculls were crucially important art collectors, lenders and donors, they were also hated. The Bronx couple flouted the art world rules of refined civility that since the late 19th century many Jews had observed in order to assimilate. “The celebration and creation of art seemed to promise escape from what was commonly regarded as Jewish,” notes professor Todd Endelman in his article, “Aestheticism and the flight from Jewishness.” Art Jews feared the Sculls would cause their flight to be canceled.

“Oh, please. Come now,” critic Barbara Rose demanded of art dealer Ivan Karp. “Can you tell me that the motivation of the Sculls is other than winning some social position?” He told her just that. Scull was a passionate collector.

The skepticism was understandable. Ethel arrived at the Horn & Hardart automat in her chauffeur-driven Rolls-Royce. Robert spent his days in the Bronx running the Super Operating taxicab company founded by his father-in-law and grabbed lunch in a greasy spoon. “And you could tell that Scull loved it,” said his secretary, Wendy Worth.

Describing how he stayed a step ahead of other collectors, Robert Scull sounded a little like a gangster played by Edward G. Robinson. “I find these artists, see,” he said. “I crawl into more lofts than fire inspectors.”

This unreconstructed Jewish behavior was not unusual among New York Jews who, like the Sculls, were born to Yiddish-speaking immigrants and had little higher education. Scull did not even finish high school. But there weren’t many Jews like that who loaned paintings to MoMA, and detractors wondered how Scull could have known to buy the best art by the best new artists.

“People talk about how Scull has to have had great advice from this one and that one: They are always trying to get me to say that I advised Scull on his collection. It’s absolutely not true,” said Henry Geldzahler, who in the early 1960s became the Metropolitan Museum’s first curator of modern art. “In 1960 when Scull began buying Pop art he couldn’t have gotten advice from anybody because nobody else was doing it.”

But no defense could help the Sculls after their 1973 art auction at Sotheby Parke Bernet.

By this time, the couple were famous, frequently photographed and written about in The New York Times, Life, Newsweek and Time. Honored at Washington D.C.’s Corcoran Gallery of Art, in New York they attended fashionable charity galas and were always dressed to the nines, with Ethel in the latest fashions from Chanel, Adolfo and Courreges; her husband now flaunted a gray beard that signaled a kind of professorial radicalism.

The auction attracted the general public, not just art insiders, and Sotheby’s overflowed with spectators. Everyone wanted to see the “beautiful people,” such as former first lady Jackie O’s stunning sister, Lee Radziwill, and also witness an auction that turned out to be what art historian Judith E. Stein called, “arguably the 20th century’s most consequential sale of contemporary art.” 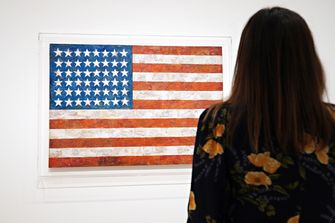 Jasper Johns’ ‘Flag’ The Sculls were major collectors of the work of Johns, whose painting is seen on display during a press preview of MoMA’s first ever Fall Reveal at Museum of Modern Art on November 13, 2020 in New York City. By Getty Images

The Oct. 18 sale of 50 works was the first devoted solely to contemporary art. The total sales price of $2.2 million broke records and made the Sculls rich. Never before had new art commanded such amounts. And again as throughout Scull’s collecting career, it was his Jasper Johns artworks that grabbed the spotlight. “Double White Map” sold for $240,000, making it the most expensive piece of 20th century American art ever sold at auction.

News, publicity and gossip about the auction results gave more weight to the money than the art. This sparked a cultural revolution. The polite camouflage that had long obscured the business side of art was tossed aside, and it is accepted wisdom that today’s money-soaked art world was born at the Scull auction.

Barbara Rose understood the auction’s significance and shuddered at the prospect of an art world dominated by money. Even worse was that the instigators were those horrible Sculls. To save the reputation of decent art Jews, the couple had to be denounced.

“The Sculls transformed their banal, nouveau riche selves into personalities by not being afraid to own up to being all that was considered lowbrow, déclassé, grasping and publicity seeking,” she wrote in a scathing New York magazine article, “Profit Without Honor.” If that description did not make it clear Rose was talking about a certain kind of Jew she went further. The Sculls, she continued, “made a thing out of being vulgar, loud and overdressed.”

Nearly all the players in this drama are now gone, and, as the new books about Jewish art collectors show, the reluctance to discuss the prominence and importance of Jewish art collectors has abated. Scull’s behavior, friends, enemies and instinct for the newest and boldest art of his day, exemplified by his passion for Johns, lies at the center of that story.