In ‘Licorice Pizza,’ P.T. Anderson shows us what makes Jews — and Haim — unique 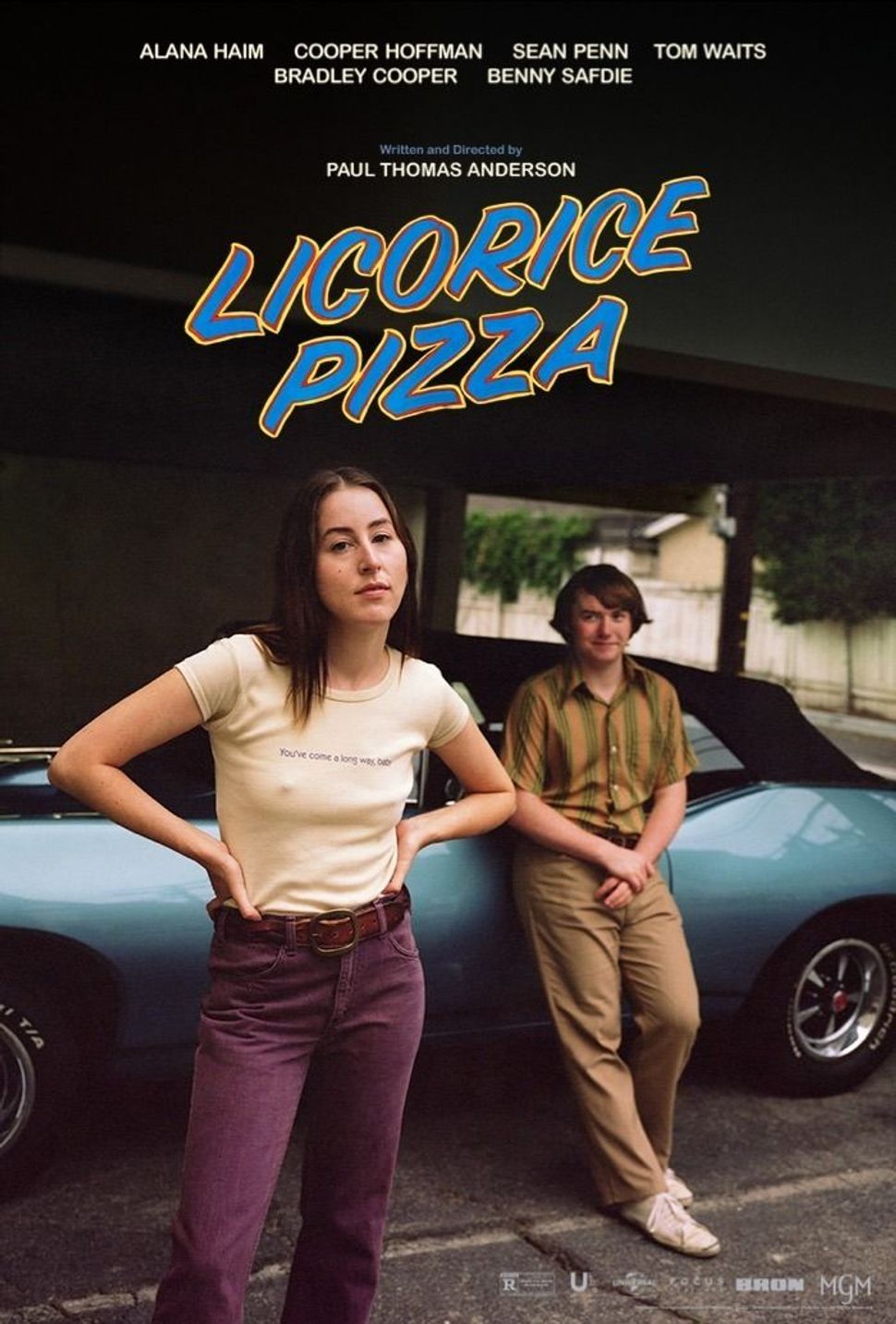 Thanks to Paul Thomas Anderson, we can now glimpse the Haim family’s Shabbat dinners.

Early on in “Licorice Pizza,” Anderson’s picaresque age-gap romance, Alana (Alana Haim), her two sisters Danielle (Danielle Haim) and Este (Este Haim) and her actual parents (Moti and Donna Haim) take their seats for some challah and wine. Until this point in the film there was little indication as to Alana’s religious affiliation. By the end of the meal, we know — she’s Jewish. Kosher? Secular? Shul-going? These distinctions collapse after her boyfriend Lance (Skyler Gisondo) declines to say the hamotzi.

“I respectfully refuse,” Lance, who is Jewish, tells Moti. “My personal path has led me to atheism.”

This remark is funny because it’s one heard from young people at Shabbat tables the world over. It’s also a largely irrelevant point for much of Jewish practice. But explaining all the nuances of an ethnoreligion where faith is no prerequisite for identity could take an entire film. Anderson does it — rather crassly — in a few seconds.

Alana follows Lance outside and, there on the street, demands to know: “What does your penis look like?”

Lance is taken aback, if perhaps a bit curious as to where this line of questioning might lead. When he flounders a bit at a response, Alana is more direct: “Is it circumcised?”

It’s reductive, certainly. But it holds a kernel of truth. One does not simply opt out of this congenital affiliation. Of course, if you’re a Jew who converts to another faith, that’s another matter, and Jews by choice were with us at Sinai. But in the case of Lance this flexible yet rigid formulation — a Jew, obliged to do Jewish things regardless of belief — applies. He is, no matter what his objections may be, a Jew. And so is Alana.

“Licorice Pizza,” which co-stars Cooper Hoffman as Alana’s 15-year-old love interest (she’s 25 in the film) nails the Valley vibe of the 1970s, returning Anderson to “Boogie Nights” territory. It is also, to date, Anderson’s most Jewish film, fascinated by the ways Haim’s real-life background might inform her character. Anderson, who directed Haim’s eponymous sister act band in the past and was an art student of their mother, Donna, is not just doing a drive-by ethnography. He understands how Jewishness has been commodified by Hollywood and remains a major source of insecurity, particularly among young women.

After the Shabbat scene, Hoffman’s Gary Valentine (based on the teenage Gary Goetzman, who grew up to be Tom Hanks’ producing partner) takes Alana to meet an agent to see about her prospects as an actor. The agent immediately remarks on Alana’s “Jewish nose, which is becoming very fashionable.” When asked to list special skills, Alana says her Israeli father taught her Krav Maga, or, as the agent calls it, “Quickdraw McGraw.” The agent could not be less interested to learn that Alana knows Hebrew.

Alana’s “fashionable” nose can perhaps be traced to Barbra Streisand, whose onetime beau, a psychotic Jon Peters, appears as a character in the film, played by Bradley Cooper. Cooper remade the remake of the Peters-produced “A Star is Born,” which starred Streisand; both films are quite self-conscious when it comes to nose shape. Even if they are in vogue, Alana and Streisand’s noses are identified as Jewish, and therefore, limiting. The agent’s remark seems to plant a seed of doubt for Alana — or just affirm something she already knows.

In a later scene Alana wonders whether she can play a guitar-playing hippie named “Rainbow” from Intercourse, PA. “I’m Jewish,” she reasons to her potential costar.

It’s a strange moment I’m still thinking about. Alana, who has reduced Jewishness to a physical trait, and has had hers reduced in turn, wonders at the limits of what Jews can do and who they are. Of course she knows they can be atheists. She doesn’t scoff at taking on the role of a Jew in a bikini selling waterbeds. But playing a hippie from rural Pennsylvania? She can’t imagine it. Or maybe, knowing her own history, she just doesn’t care to.

One of the only things that seems to spell out Alana’s motivation is a resistance to falling into what is prescribed for and expected of her. But when she’s offered a non-Jewish role, it gives her pause. And when an agent typecasts her as Jewish, she doesn’t question it. It’s who she is.

It’s no wonder then that she’d take Lance to task, despite her own rebellions and reinventions. Her “personal path” is just as meandering as his is, but Jewishness was always a part of it. It’s not a destination, but a map to guide the way — even down dead ends.

In ‘Licorice Pizza,’ P.T. Anderson shows us what makes Jews — and Haim — unique