It won the Israeli Oscar. But one of its subjects calls it a ‘pseudo-documentary.’ 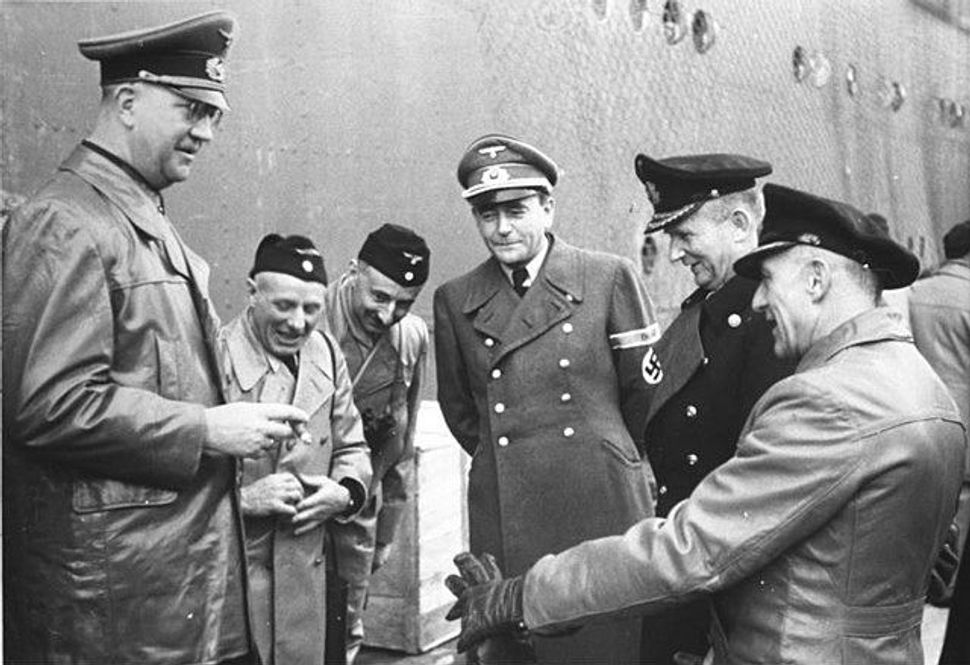 The man who provided the source material for an Ophir-award winning documentary about Nazi architect Albert Speer is challenging the film’s accuracy, claiming the filmmakers put words in his — and Speer’s — mouth.

Screenwriter Andrew Birkin, who tape-recorded over 40 hours of conversation with Speer while developing a film adaptation of Speer’s memoir “Inside the Third Reich” in 1971 and 1972, says Vanessa Lapa’s “Speer Goes to Hollywood,” which is structured around their meetings, invents dialogue and freely lifts Speer’s statements from other sources. The film purports to faithfully reproduce the contents of the tapes, only noting actors are recreating the audio well into the closing credits.

Birkin says he gave Lapa the digitized audio of his conversations in 2016, along with his screenplay for the unmade Speer biopic and archival photos. He had been involved in an earlier version of the film when documentarian Errol Morris was codirecting. Later, after Morris exited the film over creative differences, Birkin went to Israel to record interviews with Lapa.

Birkin says he refused to release the rights to his audio until he saw a cut of the film or at least learned what Lapa’s documentary was going to be about. In early 2020, after Birkin said he cut ties with Lapa, he said he learned from her production company’s lawyer that she had completed the film and was about to show it at the Berlinale. He first viewed the film on a laptop at a hotel in London.

“Talk about a jaw dropping to the floor,” Birkin said in a Zoom conversation. “There’s a couple of times I said ‘Stop! Stop! Pause the tape.’”

Birkin says much of what he was hearing had nothing to do with the conversations he had with Speer. Speer’s rant about having a “feeling of disgust” toward Jews was never said to him, Birkin insisted, and if it had been, he says he surely would have taken Speer to task for the remarks.

It wasn’t the only time Birkin, who documented time codes from the film, alleges Lapa had fabricated some of his exchanges with Speer. Some of the discrepancies, Birkin says, are minor, like Speer saying he “had to be witty, like Voltaire,” or the actor playing Speer referring to what was an outline of Birkin’s screenplay as a “script.” Others, Birkin says, paint him as someone easily manipulated by Speer or, worse, an accomplice to a cinematic whitewash of his crimes.

“Collectively it makes it sound like I was a collaborator,” Birkin said. “It’s not a documentary. It’s a pseudo-documentary.”

It is notable that of the many inaccuracies Birkin indicates, he does not deny one that makes him look quite bad — his use of the term “Jewish brigade” to refer to certain Jewish people at Paramount concerned with having more content about the Holocaust in the proposed film. Birkin said that at the time he did not think the phrase was pejorative — referring to the historical brigade in the British Army — and says that he regrets having used it now.

Birkin says part of the reason Lapa re-created his audio was that he refused to give her the rights to use his original tapes. But he suspects, when not granted permissions, she welcomed the chance to use actors as she had done in her past work.

Lapa, who also used actors in her previous film, “The Decent One,” about Heinrich Himmler, maintains that she used actors in “Speer” because of the poor quality of the original tapes, which she deemed unsuitable to be used for the duration of a 90-minute film.

“With regard to the question of the usefulness of the analog recordings made by Andrew Birkin 50 years ago and which he made available to us, we can be very clear: we spent countless hours trying to restore these cassette recordings, but this proved to be technically impossible,” Lapa and her sound designer Tomer Eliav said in a statement.

Clips of the audio obtained by the Forward were perfectly audible, and Birkin indicated the tapes were once considered to be the subject of a radio program on BBC 4 many years before Lapa approached him. Karen Rose, who was Birkin’s producer for the proposed show, said in an email there was no problem with the tapes.

“Being able to use the actual tapes was what drew me to the story in the first place,” wrote Rose, who is now the co-founder of the UK audio production company Sweet Talk. “Why diminish the authenticity of the programme by re-recording? The tapes needed more concentration than usual but for me it would be worth the effort.”

Rose said that, after her sound engineer had worked on the audio, “They sounded as good as anything being recorded remotely on the internet during lockdown.”

Radio is a different format than film, but Errol Morris told Glenn Kenny of Rogerebert.com “the emphasis on the quality of the Birkin-tapes is misleading. A diversion created by Vanessa Lapa. There is little or no problem with the audio. Birkin’s voice is clear and intelligible throughout. The reason that Vanessa Lapa did not use the audio from the tapes is not because of [their] poor quality. It was because Andrew Birkin never gave her permission to use it.”

When the Forward sent Birkin’s time-coded notes for the film, asking the filmmakers to comment on alleged mistakes and inventions, Lapa did not respond to the specific instances, but invited a journalist to come to Israel and review the production’s materials.

Lapa and Eliav wrote that “it was never our intention to make a film about Andrew Birkin and we have always indicated that. What takes place on screen is how Speer was, what he intended and how he behaved.”

“That Andrew Birkin would possibly have preferred a film focusing on him personally is possible, but again, for us only Speer was historically relevant, no one else,” the statement continued, “[W]e brought the facts as they were recorded in numerous historical sources.”

Told that what Birkin takes issue with is the moments that are presented as from his own tapes, not other sources, the U.S. spokesperson for the film answered that the filmmakers stand behind the accuracy of their film.

Counter to Lapa and Eliav’s claim that Birkin resented not being the focus of the film, Birkin said his concern was just how central he is to the final cut. He finds it curious that though his first tape included a visit with Speer, in which Puttnam and Lieberson, both Jewish and Puttnam now a lord, were also present, he, a then-26-year-old writer is presented as Speer’s only interlocutor about the film project.

Birkin is not considering legal action, noting the expense and the time aren’t worth it and he doubts he could make a case for defamation.

“If she wants to sue me, that’s fine by me and I’ll be happy to be in court and defend myself and say my piece,” Birkin said.

A jury would have ample evidence to consider in over 40 hours of tape, though some parts of the audio, as Birkin freely admits, are harder to hear than others.

Lapa’s film continues to play in respected arthouse theaters and festivals around the world. She maintains the position she held in October, when she told the Forward that in her film “everything that you hear, the laughs, the breath, the poses is 100% accurate to the original recording.”

It won the Israeli Oscar. But one of its subjects calls it a ‘pseudo-documentary.’