Sixty years ago, on Dec. 15, 1961, Nazi war criminal Adolf Eichmann was sentenced to death, following one of the most publicized trials in history. Improbably, it became the basis of a Superman comic book.

A chief architect of the Holocaust, Eichmann oversaw the Jews’ deportation to the extermination camps. After the war, he fled to Argentina, a non-extradition country, where in May 1960 he was captured by the Mossad in a daring operation. He was brought to stand trial in Jerusalem, where he stood behind bulletproof glass. He was convicted and sentenced to death in December 1961, the only capital punishment to ever officially be carried out in the history of Israel.

Superman comics in the 1960s, a period known as the Silver Age, were known for their whimsical, outlandish, kid-friendly stories. Many were baffling mysteries or “imaginary” tales — uncanonical what ifs — in which Krypton is never destroyed, or Superman is never found by the Kents, or he transforms into a monkey, or grows an ant’s head, or marries a mermaid. It’s a strange context in which to explore Holocaust themes, but that’s exactly what happened.

Superman’s writers were still almost entirely Jewish then, including co-creator Jerry Siegel and auteur editor Mort Weisinger, and their stories were often surprisingly emotional, full of passion and pathos. The Last Son of Krypton was a man haunted by the loss of his people and culture, desperately driven to prevent the same fate from befalling his new home and to be accepted there.

The peak of this gravitas, and Jewish themes in Superman’s Silver Age adventures, was November 1961’s “The Death of Superman!” in Superman #149, by Siegel and artists Curt Swan and George Klein. 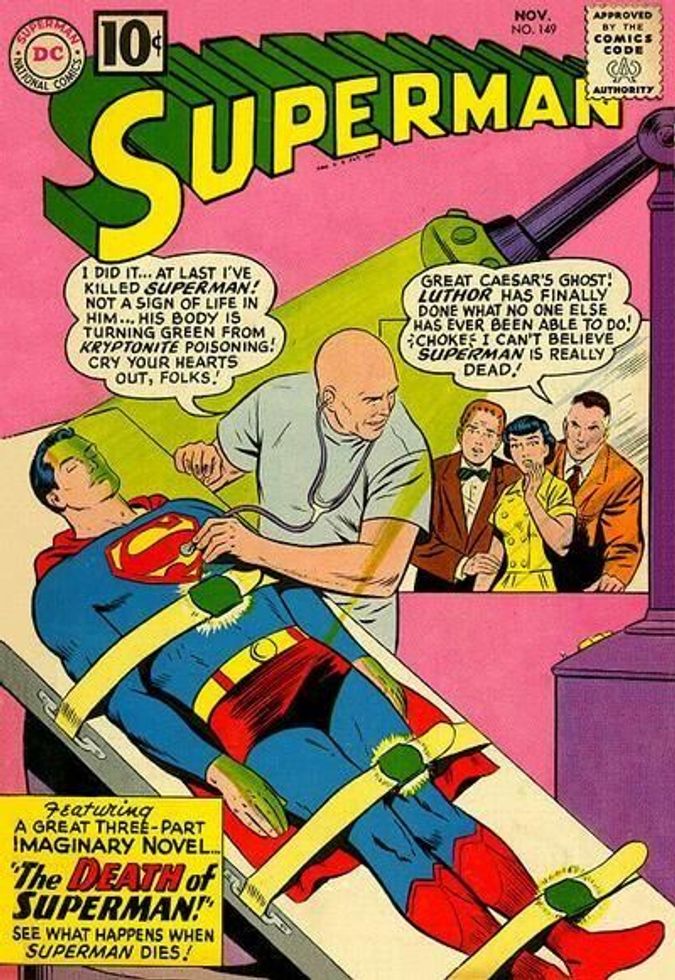 The Death of Superman: The classic November 1961 edition. By DC Comics

Though it’s relatively obscure, certainly compared to the 1992 “Death of Superman” story, which grabbed international headlines, several influential Superman handlers have cited it as their favorite comic of the era, including Marv Wolfman, John Byrne, Roger Stern, Jerry Ordway and Kurt Busiek, as well as Siegel himself.

In the story, Superman’s archenemy, Lex Luthor, finally manages to murder him. He escapes and goes into hiding in a remote location, until he’s nabbed by a disguised Supergirl, Superman’s surviving cousin, who at that point was unknown to the public and worked as his covert operative.

She brings Luthor to stand trial not in Metropolis or the World Court but in Kandor, a miniaturized, bottled survivors’ colony of Kryptonians, where he’s told: “you killed a Kryptonian, and so you will be tried by Kryptonians!” The trial is televised around the world, as Luthor stands emotionless in an enclosed prisoner’s dock, until he’s eventually sentenced to death.

The story was published at the height of the Eichmann trial, and is clearly based on it.

Kandor is a literal preserved remnant of the Old World, and Kandorians are the sh’erit ha-pletah — the escaped remnant — of their people, a biblical term (Ezra 9:14, I Chron. 4:43) used to refer to the Holocaust survivors who helped form the Jewish state.

Luthor’s capture and subsequent trial in Kandor, whose victims number six million, mirrors the Jewish people’s right to self-determination as the judges of their persecutor. In his opening statement at the Eichmann trial, Israeli Attorney General Gideon Hausner declared, “When I stand before you…I am not standing alone. With me are 6 million accusers.”

The visuals in the story also reflect the famous images of the Eichmann trial, particularly of Luthor standing before the judges in a glass booth, a guard on each side.

“We Kandorians don’t make deals with murderers!” he is told.

Luthor’s callousness is equated here with Eichmann’s, the same frightening quality that led Hannah Arendt to coin the phrase “the banality of evil” in her book, “Eichmann in Jerusalem.”

Siegel wasn’t trying to be subtle — Luthor is even called “the greatest villain since Adolf Eichmann!” 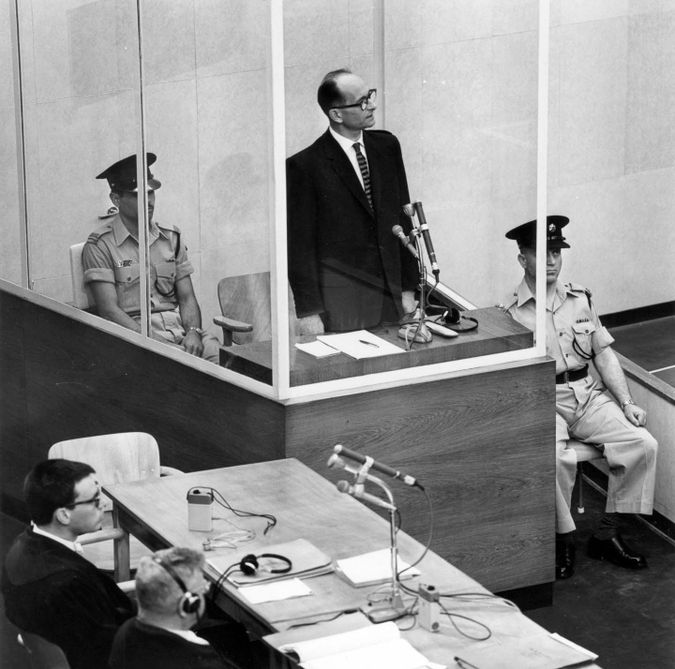 The Banality of Evil: Adolf Eichmann on trial in Jerusalem.

“The Death of Superman” proved seminal, inspiring several stories over the years, culminating in the 1992–1993 yearlong saga, which used the same title, and sold millions of copies; a collected paperback became the bestselling American graphic novel of the 20th century.

Jerry Siegel created his hero together with artist Joe Shuster as a reaction to the rise of Nazism in Europe and antisemitism in America. They used him to advocate for Jewish interests like immigration reform, British rearmament, interventionism, the New Deal and, once the U.S. joined the war, enlistment and war bonds sales.

The Eichmann trial was “the trial of the century.” It was only natural that Siegel would use Superman to respond, creating one of his most poignant stories and a postwar allegory for the Jewish fight for truth and justice.