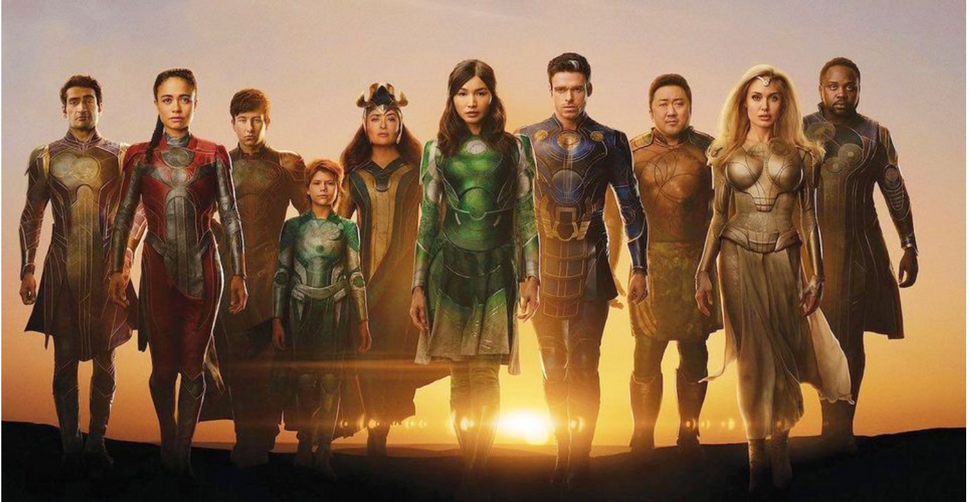 The Eternals By Getty Images

The heroes of “Eternals,” Marvel Studio’s latest movie, are a band of immortals (genetically altered humans in the comics, something else in the film) sworn to protect humanity against the mutant Deviants. They answer to the Celestials, colossal space gods that create and tamper with life throughout the cosmos.

It’s based on a comic created by Jack Kirby, the “King of Comics” whose co-creations are the basis for 19 of Marvel’s previous 25 films, including Captain America with Joe Simon and Iron Man, Thor, the Hulk, Ant-Man, the Avengers, Black Panther, Fantastic Four, the X-Men and many others with Stan Lee.

Kirby, born Jacob Kurtzberg in 1917 on the Lower East Side to Austrian immigrants, was raised Conservative, went to Hebrew school, and learned Jewish folklore and the art of storytelling from his mother Rose. Many of his stories and characters are imbued with Jewish meaning, and the Eternals, the last significant property he created for Marvel, is also the most Jewish.

Unfortunately, it’s also Marvel’s least entertaining movie. To its credit, it tries something new instead of just plugging new variables in the old formula. It’s more mature, thoughtful, with characters that act and interact like grownups instead of teenagers and have more complex relationships. There’s even a brief sex scene, which is safely PG-13 but still a jarring change from Marvel’s usual puritanical approach to romance. It’s also a very pretty movie, directed with a sure hand by Academy Award winner Chloé Zhao (who also cowrote it).

The problem is that it’s boring. Younger viewers will likely have a hard time sitting through its 2.5 hours. For all the super-heroics, special effects and cosmic scale, it’s almost mundane. The ensemble cast is strong, led by Gemma Chan with Angelina Jolie and Salma Hayek at her flank, but the plot they wade through is rambling nonsense.

The heroes are barely in costume, the bad guys are characterless beasts, the action is well executed but pro forma and it ultimately all comes down to yet another climax of people throwing CGI fireworks at each other.

The original comic series, to be fair, was also a meandering narrative, with less character development than the movie. But that wasn’t the point. It was a platform for Kirby’s mind-bending, psychedelic, impressionistic mishigas. The film offers something more comprehensible and emotionally engaging, but far less wondrous.

Kirby had always drawn upon his background, with several of his superheroes serving as semiautobiographical mouthpieces (most famously the Fantastic Four’s Thing, aka Benjamin Jacob Grimm of the Lower East Side, who eventually came out as Jewish in 2002, was bar mitzvahed as an adult in 2006 and got married in a Jewish ceremony in 2018, but he progressively included more Jewish themes in his work.

“The Eternals” was a freestanding comic, only tangentially part of the latticework Marvel universe, giving him the freedom to be as outré, and as Jewish, as he liked. The result is a superhero comic book that’s rife with biblical and Kabbalistic allusions, as well as one that eschews naturalism for biblical bombast and scale. Ultimately it proved a commercial failure, lasting only 19 issues plus an annual from July 1976 to January 1978, but its characters and concepts have since become foundational to Marvel’s mythology.

The core idea was heavily inspired by Erich von Däniken’s Chariots of the Gods, which posited that ancient myths were recordings of alien visitations. The cover of issue #2 even declares “The Eternals” to be more fantastic than the book. Kirby combined this with Inca lore and design, Judaism and sci-fi, creating something wholly new and unique.

The Eternals are an ancient, highly evolved race, perpetual outsiders to human society. Some live in isolated remote communities, while others hide their identity to assimilate and interact freely with humanity. In the film, they also yearn everlastingly to return home.

It’s not a subtle metaphor, and it’s not meant to be. Issue #6 states that they’ve come “to prevent a Holocaust,” a word used repeatedly in almost every issue of the series. Issue #8 shows the Deviants, in the comic not space monsters but a mutated offshoot of humanity that lives beneath the sea, as a rigid caste society that exterminates those deemed genetically inferior by herding them in “death wagons” to a “purity time” ritual in fiery furnaces.

Issue #2 reveals that the Deviants, who inspired the myths of devils and demons, also brought about the flood in Genesis, and it was the Eternal general Ikaris who guided Noah’s Ark to safety. The flood is also referenced throughout the series. Jacob’s ladder is likewise revealed to have been a Celestial laser beam in issue #7.

The Celestials, mountain-size cosmic beings that look like technological fever dreams, are the true stars of “The Eternals” and arguably Kirby’s coolest designs. They’re also the movie’s most misguided change from the comic, portraying the Celestial Arishem as a red monolith with lights. (More comic-accurate Celestials can be glimpsed in 2014’s “Guardians of the Galaxy” during their visit to the space station Knowhere, which is actually a severed Celestial head. Kirby’s designs can also be found with high fidelity in 2017’s “Thor: Ragnarok,” especially on the planet Sakaar.)

The Celestials’ Baroque designs heavily incorporate one of Kirby’s signature motifs, interconnected spheres and lines, a pattern that’s also on Ikaris’s uniform, reminiscent of Kabbalah’s Tree of Life, a cosmological diagram of the planes of existence. And it’s a thematic fit as well, with later stories expounding the Celestials’ role in the cyclical creation and destruction of the multiverse, resembling the shevirat ha-kelim — the shattering of the vessels — the Midrashic account of the building and destruction of the worlds that preceded our own, and the Kabbalistic concept of tzimtzumim, the contractions of infinite universes into known reality. The notion of the Celestials returning to Earth to judge humanity is likewise evocative of Judgment Day.

Many of humanity’s myths were inspired by contact with Eternals throughout history; their ranks include Gilgamesh, Ajak (Ajax), Thena (Athena), Ikaris (Icarus), Phastos (Hephaestus), Makkari (Mercury) and Sersi (Circe). The Celestials, then—omnipotent, unfathomable, wrathful space gods who created mankind through evolutionary experimentation, and especially their leader Arishem, who sounds like Hashem, one of the biblical names of God — could have inspired the very notion of God.

Kirby peppered quite a few Hebraic names in The Eternals, some more vague and playful and others clear and meaningful. The Celestial word for “man,” the only word translated from their language, is “Aduum,” clearly evoking “Adam.” Even more so in the original Hebrew, in which the second “A” is stressed (Adaam) and the word is also shorthand for “mankind.”

Arishem the Judge is strongly suggestive of Hashem, literally meaning “The Name,” and can equally be read as “God’s lion,” Ari being short for Arieh, lion in Hebrew, as well as a common Jewish name.

Gamiel the Manipulator incorporates the theophoric suffix el, another word for God, found in the names of prophets and angles in the Bible like Daniel, Gabriel and Michael. “Gam” was likely just meant to sound Hebraic, although gam in Hebrew means “also,” so Gamiel can be read as “also god” or “another god.” It’s a stretch, but the name might also be a nod to gmila, meaning due reward, which would have been familiar to Kirby from gmilut chasadim, the central tenet of charity and kindness, which the Mishna ties to the world’s merit to exist.

There’s also Gammenon the Gatherer, which sounds like mammon, Hebrew for money or wealth; Jemiah the Analyzer, iah being yet another name of God and a common theophoric suffix, derived from Yahweh (found in English words like Hallelujah and Jehovah); and Tefral the Surveyor, a possible reference to Tiferet, meaning splendor or glory but laden with metaphysical meaning as the central, unifying Sefira in the Tree of Life and associated, aptly, with divine judgment.

Kirby wasn’t looking to make these allegorically consistent or profound. They’re mostly suggestive, likely tongue-in-cheek. But he knew what he was doing — one Celestial is called Oneg the Prober, oneg being Hebrew for pleasure.