Stan Lee was his own favorite superhero – that was his downfall 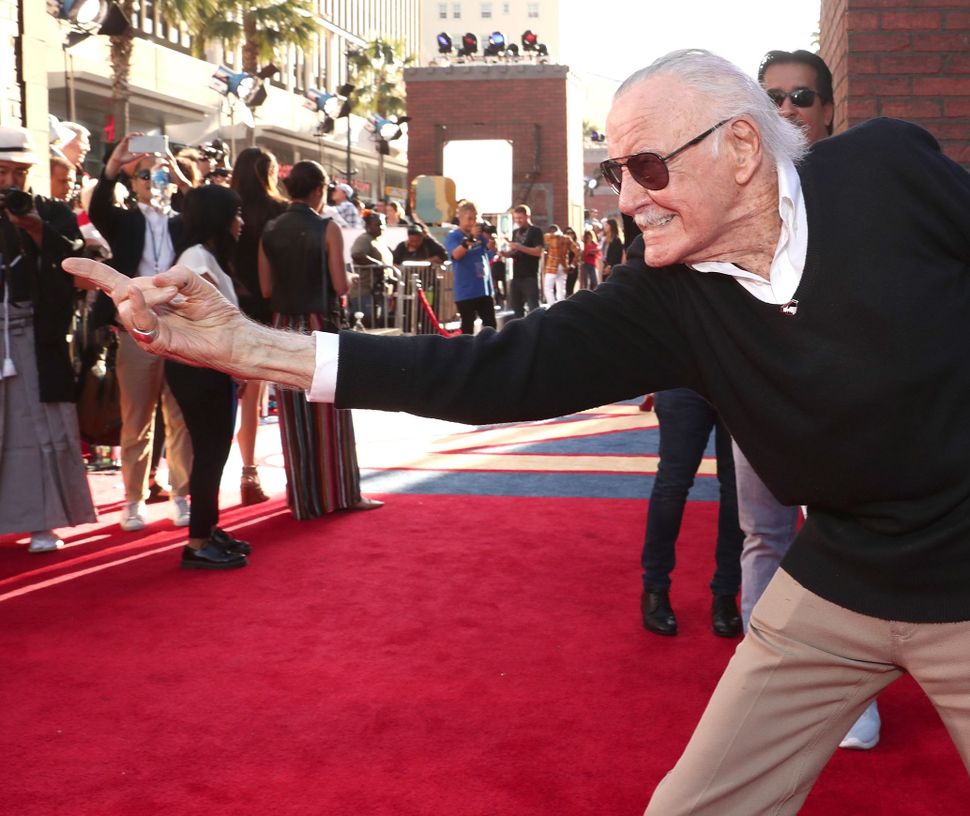 Where exactly did Stan Lee, the character and the person, come from? It depends what part of the man you’re looking for.

One of Lee’s oft-repeated founding myths, evidence of the extreme self-love that made him the godhead of the Marvel Universe, is the time he painted the ceiling of his high school’s literary magazine office with the words “Stan Lee is God.” (The rub: he was going by Stan Lieber at that point.)

Or maybe his genesis, and his alleged gift for betrayal, lies in the time he — may have — snitched on artist Jack Kirby and writer Joe Simon for moonlighting at DC comics behind Marvel’s back. (Kirby always believed Stan tattled; Simon never did.)

Perhaps, as Abraham Riesman’s new book on the comic maven, “True Believer: The Rise and Fall of Stan Lee,” implies, via theme or simple epigenetics, Lee’s tragic “commitment to his own hype” is rooted in a long ago visit from an émigré to the U.S., who returned to Lee’s mother’s shtetl with false tales of his fortune in the New World. (As the first line of the book states, “we cannot know for certain” if Lee’s forebears were even there to see this prodigal Romanian’s homecoming, but it makes for some nice Old World resonances that prefigure the New York-born Lee’s own go at the American dream.)

Real-life origin stories, and Lee’s in particular, are less pat and easy to regurgitate than nativities spawned from radioactive spider bites or gamma radiation. In part this is due to Lee’s own dissembling. He had an infamous tendency to take credit and construct a personal mythology at odds with the narratives of his collaborators. Central to Riesman’s book is the core ambiguity of whether Lee as a writer and editor deserves to be recognized as the main creative force behind Marvel and its iconic stable of characters. The question is not a posthumous one; it is still vital, Riesman insists, to Lee’s legacy. Whether that concern will engage the same kind of mass audience that Lee’s co-creations began to seize in his final years is unlikely. It’s not a rip-roaring read, but it is often a gutting one, even, and perhaps especially for, a fan who knows of the controversies already.

If anyone could get to the bottom of who did what in developing Marvel’s signature superheroes — a notoriously tricky task given the “Marvel method,” which left artists largely free to design the content of panels, and thus the plotting and pacing of a comic — it’s Riesman, a regular writer for Vulture and inveterate comic nerd, who profiled Lee in 2016.

It’s plenty clear that he buried himself in the archives. Riesman sat through a 47-minute audio recording of Lee’s daughter listening to the radio. He reviewed Lee’s handwritten notes for film ideas. He spoke with Lee’s brother, Larry Lieber, Jack Kirby’s assistants and Lee’s former employees, fans and detractors both. Often it seems like all of the research went on the page — including a somewhat excessive primer on Romanian antisemitism from Vlad the Impaler up to the early 20th century. (Riesman seems to have written the first account in an English language publication of an 1890 pogrom Lee’s dad survived as a 3-year-old, which would perhaps be better handled in another book.)

Thankfully, for every not-quite-relevant historical digression, there is interesting background on the early, slapdash comics industry and solid reporting to crack the tough nut of the proper attribution of Marvel’s contested lineup — though that last notion is a niche one compared to the book’s character study. The Lee presented here is a man who certainly overstated his role in originating the franchises now worth untold billions. Tracking his on-the-record inconsistencies, and those of artist collaborators Jack Kirby and Steve Ditko, the book is best when it finds the root of Lee’s fibs.

As previous biographies — and even Lee’s own remarks — have suggested, he felt the comics form to be beneath him. He aspired to write a great novel, direct an arthouse film or, in the days when they still had prestige relative to comic books, helm a syndicated comic strip. The job in comics was a stopgap, a teenage gig provided by a cousin-in-law that became an all-consuming career as Lee toiled as an editor, (always freelance) writer and finally publisher. If Lee had a part in making Marvel more erudite through characters like the Silver Surfer, it was likely more out of a desire to do something different than to elevate the form.

Lee’s tragedy, born of ego and shame, was to inflate his own importance as a kind of exit strategy. Comics were always meant to be a springboard to other opportunities — including a collaboration with filmmaker Alain Resnais (really; Fellini also visited the Marvel offices as a fan) and a political talk show — that never went anywhere. In his last decades, all Lee had as a commodity was his own image, built on the brand he was credited, through his own public preening and failure to correct the record, with birthing.

As a profile of Lee’s insecurities, his occasional genius (we learn he pitched the Japanese “Super Sentai” b-roll concept of the “Power Rangers” show a few years before the Might Morpher’s debut) and his narcissism, Riesman’s book feels definitive, likely benefiting, where other efforts failed, from not having Lee around to spin the narrative. As a guide to Lee’s creative inspiration, it’s disappointing but diligent in its objective, inconclusive report on embattled intellectual property. When the text aims for deep, psychoanalytic glosses, such as when Riesman claims his subject spoke “brutally” and Oedipally of his father in an autobiographical passage where Lee said he felt bad that his dad was out of work in the Depression, the book overplays its hand. But then, Riesman often breaks in to proclaim that his task as a biographer is in some sense futile.

Lee is not an easy subject to pin down beyond his increasingly public persona. Even in his final act, defined by film cameos and corporate crime he may or may not have been in on, it’s hard to know which Lee we’re getting: a trusting, generous man or a shark who merely projects that image.

In the end, the mask falls away amid tragedy. Boosted by firsthand reporting, Riesman sorts through widely-publicized elder abuse claims, alleged on behalf of Lee by clashing business partners and his daughter, JC — each accusing the other. Riesman encounters candid footage of Lee in his home that “chilled the twelve-year-old geek” in him. Better bullshitters than Lee entered his life and took advantage of him in his dotage. If Lee always had the makings of a showman, and a not entirely honest one, he was no match for real con artists.

After trumping up his contributions to his art — and wondering why he continued to anger Kirby and his other creative partners in his efforts — it’s hard to read malice into Lee. He was perhaps naïve to believe in his and others’ good intentions. Above all else, as the title suggests, he was doomed to believe in the myth of himself.

Stan Lee was his own favorite superhero – that was his downfall