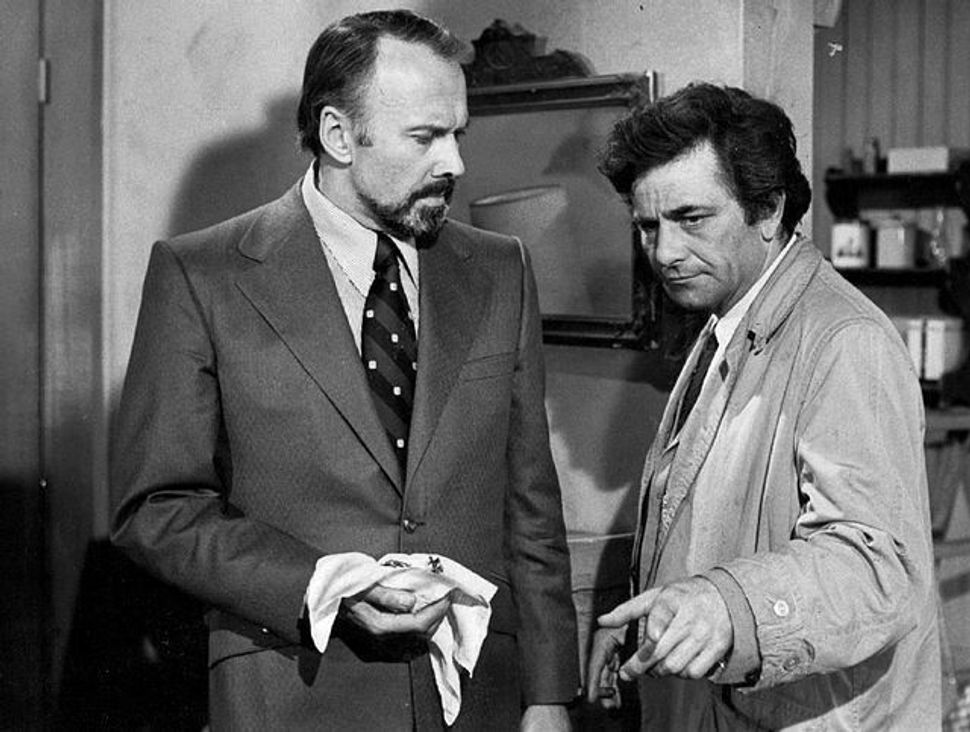 Richard Kiley and Peter Falk on an episode of “Columbo.” Photo by wikimeda commons

When Steven Spielberg was just 22, he dropped out of college and inked a multi-year contract to direct television for Universal; he wasn’t exactly a natural fit for the medium — nor did he want to be.

That the budding auteur didn’t mesh well with the likes of “Marcus Welby, MD” should surprise no one. His feature film ambitions — with their many, time-consuming camera setups — were unwelcome in the staid procedurals of the late ‘60s and early ‘70s. Spielberg had better luck working with Rod Serling, helming a couple of eerie segments for “The Night Gallery,” where he experimented with scary jump cuts and, scarier still, directed Joan Crawford. But the gig that gave Spielberg latitude, both in style and cinematic length, was “Murder by the Book,” the first non-pilot episode of “Columbo.” He was by then 24, and established the visual grammar for the shabby, secretly cunning detective’s show for 13 seasons.

Spielberg wastes no time putting his stamp on the camerawork, conveying everything we need to know — about his approach and the story — with slick economy. 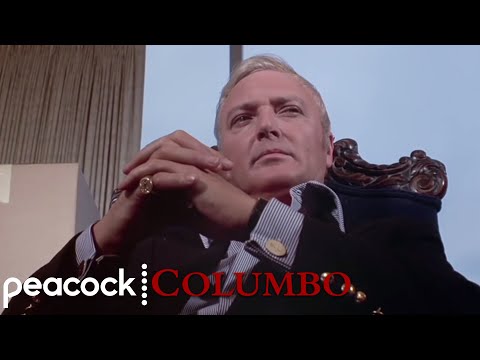 We open on a silver Mercedes convertible driving down an LA street. It’s the only car driving in that lane, moving to the left of the frame against the flow of traffic. At the same time, we hear the clack and whir of an electric typewriter. In one shot, the camera pulls back from the car, up from street level in one, vertiginous motion — we’ve been watching the the road from the window of an office. As the Benz disappears from the shot, the camera pans right over a shelf of books by the window and our focus arrives at the source of the typing.

It’s a fellow in glasses. What’s he writing? We have clues. An array of skulls, mostly those of animals, are on a desk to his left. But then we cut away. There’s a framed Newsweek cover on the wall. The gentleman we see typing is on it, along with another man. The magazine cover tells us this solitary typist is one half of a “best-selling mystery team.” Here’s a mystery: What happened to the other guy?

The camera tilts down and we get a glimpse of the ribbon: “‘J’ACUSE,’ [sic] SAID MRS. MELVILLE, POINTING AT THE DOCTOR.”

We leave the office as the typing continues. The Mercedes comes into view again, making a wide turn into a parking structure opening that bears a sign reading “EXIT ONLY.”

What has Spielberg told us already, as the driver and the writer near collision? The driver of the Mercedes surely has expensive taste. As evidenced by his entrance in an exit zone, he doesn’t care much for rules. The typist, though part of a duo, appears to be working by himself, and quite efficiently, writing popular “the butler did it”-type mysteries.

The car reappears in an empty, outdoor lot. If there were other people here, they’re gone now. The writer is on a roll — working late. Then the title comes on the screen: “Murder By the Book.” If a murder is about to go down, there’ll be no witnesses.

We are just reaching the one minute mark. There’s been no dialogue, no music, only the percussive hum of the typewriter.

What comes next? A hand opens a glove compartment and retrieves a revolver. The hand opens the cylinder, closes it and stuffs the gun in a coat. A low angle reveals the driver exiting the car.

We’ve seen him before. He’s the other half of the team from the Newsweek cover. The suspense builds as the typewriting continues at a steady tempo.

Back in the office the camera pulls in on our writer, unaware of what’s coming his way. He’s absorbed in what we see next — the keys, the paper, the words. A knock at the door.

Another knock. We see a large ring on the fist rapping on the door. This guy’s a bit of a fop. The writer rises and opens the door. A POV shot: The man on the other side — the driver — scowls, shadow fleeing his face as the door parts. And then his face recedes to a blur, replaced by the barrel of a gun.

The writer looks at the gun, looks at his writing partner and laughs. “Oh, c’mon, Ken,” he says. “Are you forgetting that I’m one half of the world’s greatest mystery writing team?”

The screenplay is by Steven Bochco, who would go on to create “Hill Street Blues” and “LA Law.” It’s an enjoyable script, but this dialogue as delivered is unnecessary. Spielberg already told us everything.

What’s more, he gives clues to motive. The writer, Jim (Martin Milner) is doing all the work, the other, Ken (Jack Cassidy) is living large, driving luxury cars, wearing fancy clothes and giving interviews on TV. Ken will, of course, kill Jim and he’ll do it for insurance money. Jim wants to write solo, as he’s been doing, with only his name on the cover. Ken can’t write at all and so, with Jim gone, so goes his meal ticket.

If Detective Columbo had access to the first minutes of this episode, with all its visual information, he wouldn’t have to bother with a “one more thing.”

As “Murder by the Book” continues, more of Spielberg’s trademarks emerge. We get a look at the “Spielberg Face,” slack-jawed reaction shots of people about to be murdered. Chiaroscuro lighting is pervasive. He revels in depth of field and pulling focus to key pieces of evidence. He teases us with his patented “Spielberg Oner” longshots, trailing Peter Falk past a police line and into the backroom of a country store as a gaggle of reporters pepper cops with questions.

The young director’s style is seldom unnoticeable, but then, neither is it obtrusive. It does what good directing should do: use visuals to tell the story and imbue it wherever possible with theme and atmosphere. Not all of his choices work — particularly the unflattering angles and lighting foisted on actress Barbara Colby as Lily La Sanka, a lonely, widowed witness — but the episode established him as not just another journeyman. He was making movies for TV, not a TV show.

“I looked at every television episode I directed as a stepping stone to getting someone to hire me to direct a feature,” Spielberg told director Edgar Wright in 2018. “So I used the television opportunities to try to do things that would make people think I could do feature films.”

While Spielberg believes this tactic resulted in him losing work (“TV producers were appalled at where I’d place the camera and how my episode looked nothing like the series that they’d been successful producing”), it worked for “Columbo.”

Spielberg told Wright that creators Richard Levinson and William Link wanted their show to look “like a feature film.”

“That was my first experience with episodic television where the producers were encouraging me to make shots, whereas other television producers would beg me not to,” Spielberg said.

A rough cut of the “Columbo” episode got Spielberg a meeting with Barry Diller, who got him the job of directing the ABC TV movie “Duel,” which led to the rest of Spielberg’s career, from “Sugarland Express” on to 2021’s “West Side Story,” all because Levinson and Link let him take risks.

Spielberg didn’t forget, serving as a mentor and champion to a new generation of filmmakers — and apparently even guilting Vin Diesel into doing more directing.