Lowville: This village of 3,200 people near the Canadian border is home to one of the nation’s largest cream cheese factory. By Wikimedia Commons

While Manhattan bagel shops are scrambling to meet their schmear demands, for Paul Denise, the Superintendent of Public Works in Lowville, New York, the cream cheese crisis of 2021 reflects a much larger concern: balancing competing water needs in his community.

Lowville, a village of 3,200 people near the Canadian border, is home to one of the nation’s largest cream-cheese factories. The Kraft Heinz plant, which supplies New York City with its tubs of Philadelphia, has at times in the last months used more than 80% of the municipality’s water to meet soaring cream-cheese demands.

To ensure that Lowville has enough water for essential activities, its board of trustees in November took the drastic step of regulating the plant’s water access. The reduction of water use combined with peak season for New York’s largest user, Junior’s, the Brooklyn cheesecake giant, to form a significant factor in the bagel-spread shortage.

Since The New York Times reported a citywide cream cheese shortage earlier this month, the media has struggled to explain the sudden shortfall. Bloomberg reported nationwide cream cheese production had fallen 6.2% in October, while at-home consumption has increased 18% in the past year. Still, mysteriously, only New York City foodservice providers who buy in bulk have suffered shortages, while the city’s store shelves are well-stocked with packaged Philadelphia. Somehow, no other dairy product has been affected. Lowville: This village of 3,200 people near the Canadian border is home to one of the nation’s largest cream cheese factory. By Wikimedia Commons

A variety of theories has cropped up: unnamed unvaccinated truck drivers; labor shortages in unspecified plants; and a cyberattack on a Wisconsin cheese producer a full seven weeks ago. The Guardian suggested New Yorkers themselves were at fault: the result of laying it on too thick. And on cue, Republicans took to Twitter to blame President Biden.

Combined with global supply chain problems and high inflation as the economy recovers from COVID-19, the vague reasons for the crisis have sowed fear and uncertainty. If today it’s my bagel order, what will come tomorrow?

However, New York’s cream cheese woes don’t reflect cracks in the overall economy. They are a result of nationwide consumers stocking their kitchens with New York bagels and cheesecakes, and a local issue that predates COVID. Lowville, the upstate New York village where most New York bagel shops get their spread, doesn’t have enough water.

A Million Gallons of Water Per Day 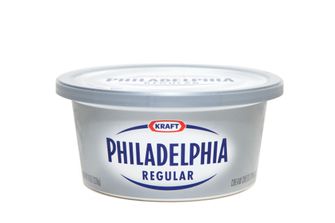 According to a Kraft Heinz representative quoted in The New York Times, the company is shipping out 35% more product to foodservice partners than last year. “Exceptional increases in production volumes during the pandemic based on customer demands,” Kraft Heinz explained in an October statement to local television station WNYN-TV, “has led to a corresponding increase in our water usage.”

Starting in the summer, the plant began to use a significant portion of the 1.5 million gallons of water the Lewis County community is permitted to draw daily from the watershed. “When they were pulling 1.1 [to] 1.2 [million gallons], that didn’t leave very much for the rest of the village,” said Superintendent Denise. The North Country village has sometimes asked residents not to water their lawns or wash their cars.

One day in August, Kraft used over 85% of the municipality’s daily water allotment, dropping the local reserves to a dangerously low level. Lowville declared a water emergency. “If they drain that tank, that tank ultimately supplies the Lewis County General Hospital,” Denise said.

The problem is not new. In 2019, the Wall Street Journal reported that an increase in string cheese production was eating up over 80% of Lowville’s daily water usage. Local politicians tread carefully around the issue. The factory is so central to the village life they celebrate a yearly cream cheese festival. Kraft Heinz is Lewis County’s biggest private employer and the largest purchaser of milk from local dairy farms. A plant closure would be devastating for the rural community.

When a water warning was announced in October, elected officials finally took action. As of Nov. 1, Kraft Heinz must pay surcharges for excess use, and if water levels dip too low, the village will reduce water flow to the factory. According to Denise, since then, the Lowville creamery has been using around 800,000 gallons a day, down from the 950,000 to 1.3 million gallons used daily in the prior months.

Around this time, Don Merkelson of F & H Dairy in Brooklyn said Kraft Heinz started missing orders and sending in light shipments. Merkelson normally receives a 40,000-pound load every two weeks, which he then distributes to between 50 and 100 local bagel shops. “This weekend, we went to Costco and picked up some three-pound loaves of cream cheese just to keep people going,” he said over the phone.

Merkelson believes his competitors are also mainly supplied by Kraft. “Most bagel stores prefer to use that brand,” he said, estimating that about 75% of New York bagel shops use Philadelphia. Kosher shops, he said, are the exception.

Kraft Heinz didn’t respond to emails asking if the reduction in water use may be causing the cream cheese shortage. But Andrew Novakovic, an agricultural economist at Cornell University, believes it to be an important factor in the crisis.

“Many commercial facilities have their own water supply,” Novakovic wrote in an email, explaining that “It is often the case that a small municipality cannot accommodate a large scale, modern plant.” 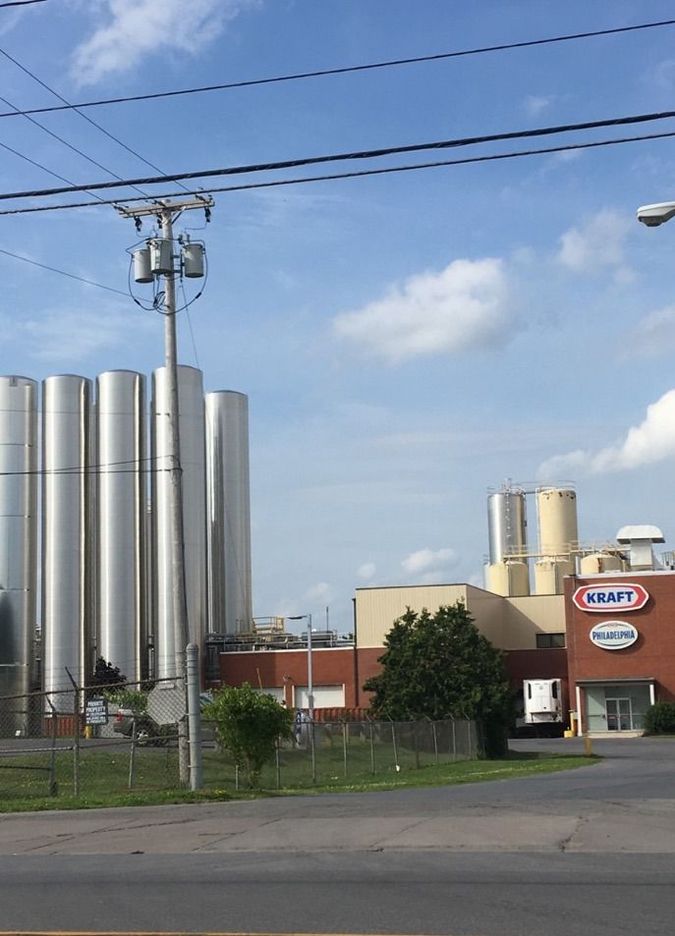 Kraft Work: Lowville’s Kraft Heinz plant, which supplies New York City with its Philadelphia, has at times in the last months used over 80 percent of the municipality’s water Courtesy of Andrew Silverstein

On a phone call, Lowville Mayor Joseph Beagle resisted the idea that his village didn’t have enough water supply to meet demand. “There is no supply issue as far as water goes,” he said. Instead, he points to overall labor shortages in Lewis County. The drop in Kraft’s water usage, he says, comes from reducing waste and the colder weather helping cooling processes. Superintendent Denise believes Kraft keeps water use below the new limits to avoid negative local news coverage. Both officials and others in the community said the factory was tight-lipped about their production. Workers refused interviews.

In normal times, the upstate plant could satisfy New York City’s cream cheese appetite without running the village dry, but this year has seen a dramatic increase in demand. While the media focus has been on bagel shops struggling to schmear, they represent only a segment of the local bulk cream cheese market.

A Perfect Storm for Cream Cheese 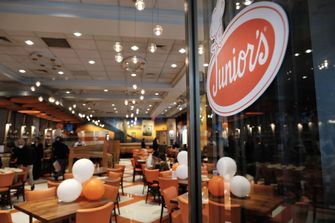 King of Cream Cheese Users: Junior’s opened in 1950 as a single Brooklyn restaurant. These days, they sell cheesecakes in 8,000 supermarkets nationwide, have four restaurants, and a booming online order business. By Getty Images

In an interview with Gothamist, Alan Rosen, the owner of Junior’s, said the Brooklyn cheesecake giant is going through 120,000 to 160,000 pounds a week of Philadelphia cream cheese. That is six to eight times the amount F & H purchases to stock dozens of bagel shops. Much of that scarce cream cheese gets shipped out of the New York area in the form of Junior’s cheesecakes.

Junior’s opened in 1950 as a single Brooklyn restaurant. These days, they sell cheesecakes in 8,000 supermarkets nationwide, have four restaurants, and a booming online order business. Their cheesecakes are available in Japan, France and South Korea. In 2019, both of their Times Square locations ranked in the top 10 of the nation’s independent restaurants in terms of the number of meals served according to the publication Business Rankings Annual. COVID-19 shuttered the restaurants, but supermarket and online cheesecake sales increased.

“People were looking for comfort food,” Rosen said by phone. “We didn’t have a down year.”

Diners have returned en masse to Junior’s restaurants, while retail sales have held steady, now amounting to 40% of overall revenue. The Brooklyn entrepreneur estimates business is up 55% from 2019. Since his cheesecakes are made of 85% cream cheese, Rosen says he goes through 4-million pounds of cream cheese a year — a large share of that during the holiday season.

The creamy dessert is not just found at Hanukkah parties, Thanksgiving dinners and corporate gift baskets; the Jewish cake has become a Christmas staple.

“We do about half our mail order-business in November and December,” the third-generation owner explained.

When Junior’s peak season coincided with the water supply reduction, that might have been the perfect storm. In the past two weeks, Junior’s has had intermittent production stops at their New Jersey factory as their supply of Philadelphia from Lowville has fallen short.

“We can be contributing to our own problem,” reflected Rosen in discussing his recent growth, but he pushed back when asked if he is making it hard for local bagel shops to get their hands on supply. “I don’t think you can blame me for this. But nice try,” he said.

Indeed, overall cream cheese demand is up and Junior’s is not the only New York brand which has expanded in the national market. Goldbelly, which ships food nationwide and features such New York institutions as Russ & Daughters, Zaros Family Bakery and Ess-a-Bagel, increased revenue by 300% during 2020. Still, Junior’s is by far the largest user in New York. “I don’t think anyone in the area can touch us,” Rosen claimed, adding that Junior’s is one of “the top three users of cream cheese in the country.”

Rosen doesn’t plan on slowing down. He hopes to turn his family business into a billion-dollar company. He’s not worried that future supply issues will affect growth. “Kraft is a great partner. And we’re not concerned in the long run,” he said. Mayor Beagle is also optimistic the local Kraft Heinz factory can increase productivity. The village will add new wells to provide added water capacity starting by next summer.

Lowville may be able to solve their freshwater deficit, but according to professor Novakovic, “In places of the world where climate change reduces water availability, this will definitely be a future factor.”

The cream cheese crisis of 2021 will surely pass, even if the entire Midwest starts noshing on New York cheesecakes and bagels like Upper West Side Jews. Inflation and supply chain issues will also be resolved, but water scarcity may not.