The most powerful Jewish artist you’ve never heard of Maryan in his Chelsea Hotel studio, 1974. By John Lefebre

A massive exhibit at one of Miami’s leading art museums is reclaiming a place in art history for an iconoclastic but little-known Jewish artist and Holocaust survivor. . The show, “My Name Is Maryan”, at the Museum of Contemporary Art (MOCA) in North Miami, explores the legacy of the Polish-born artist Maryan, who survived an adolescence in Nazi camps to create a groundbreaking, visceral body of work. 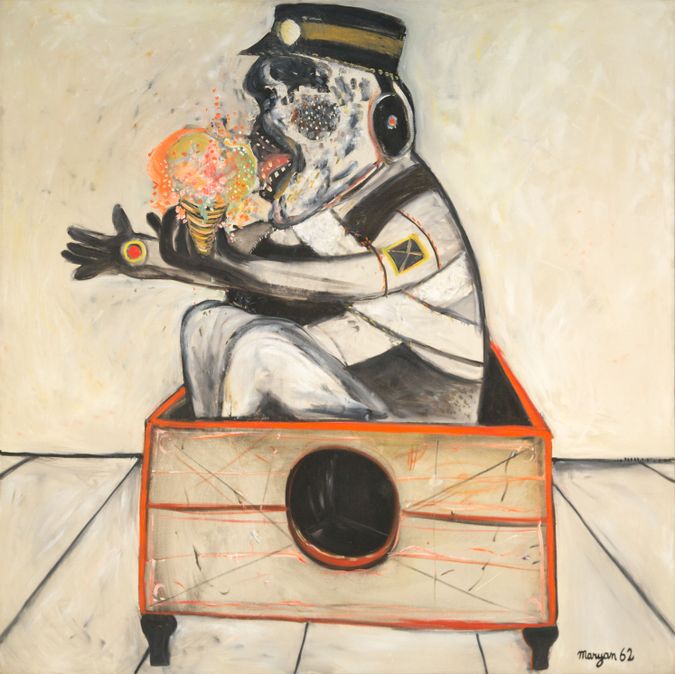 “There’s more here than we could have imagined,” said Chana Bugazad Sheldon, MOCA’s Jewish executive director, who was inspired to produce the exhibit through personal history and chance. “I believe Maryan was looking at his own lived experience on a grander level, as the human experience.”

Born Pinkas Bursztyn in Poland in 1927, Maryan and his working-class Jewish family were taken by the Nazis in 1939.

The only one in his family to survive, he was held at work camps, then at Auschwitz and Birkenau. As Russians were liberating the camps, Nazi soldiers shot him eight times. The injuries led to his leg being amputated.

He emigrated to Palestine in 1947, and began studying art in what soon became Israel until 1950, when he moved to Paris. There he adopted the name Maryan, a way of rejecting his identity under the Nazis. He became a successful part of the art community there.

After France rejected his application for citizenship, he moved to New York City in the early 60’s. He lived at the Chelsea Hotel, the legendary bohemian enclave, and died of a heart attack in 1977, when he was only 50. 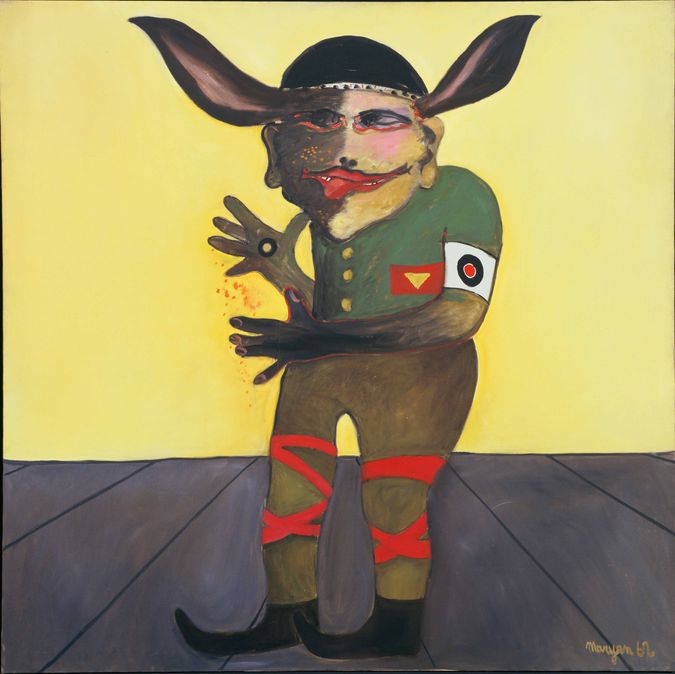 Maryan rejected the label of Holocaust artist, and the MOCA show includes just one small room with paintings from his time in Israel that directly reflect that horrifying experience. One is a tortured human tangle entitled “Crematorium at Auschwitz.”

But the trauma appears to have reverberated in his art in many other ways. Many of his paintings depicted grotesque, almost cartoonish power figures he called personnages.

In the 70’s, Maryan began confronting his Holocaust experience in therapy, reams of drawings and notebooks, and the 1975 film Ecce Homo, screened at MOCA, where he sits in his Chelsea Hotel studio, in a straitjacket, a Star of David on his chest, and juxtaposes stories of piles of Jewish corpses and Nazi attack dogs with images of contemporary atrocities like the My Lai massacre in Vietnam and police dogs attacking Civil Rights protestors.

Maryan’s time in Israel was also traumatic, said Noa Rosenberg, curator of Modern Art at the Tel Aviv Museum of Art, who is organizing the exhibit there.

“He was really out of place,” Rosenberg said at the MOCA opening.

It was a time when the new nation rejected the history of Jewish Diaspora and what it saw as Holocaust victimization in favor of a story of a powerful new state, and people, driving their own fate.

“The narrative there was being strong, complete, everyone was painting fields and sun and reborn Jews,” said Rosenberg. “He was a young Holocaust survivor with one leg. It was shameful. They teased Holocaust survivors for being weak.”

Sheldon’s personal history, and a chance encounter, led her to bring Maryan’s work to MOCA.

Sheldon’s maternal grandmother was a close friend of Maryan’s wife Annette. The two Jewish women met while in hiding at a French convent during World War II. When Sheldon was a young woman starting out in the art world, she visited Annette’s Manhattan apartment and found a time capsule of Maryan’s world: artwork, writings, even one of his paintbrushes in a cup on his drafting table. The wealth of Maryan’s visceral images made a powerful impression on her.

“Clearly, I was in the presence of a great artist,” Sheldon said. Maryan
Two Personnages,1968
Oil on canvas 52 x 64 in. Courtesy of Venus Over Manhattan

Almost two decades later, in 2018, Sheldon encountered Maryan’s paintings at a gallery at the Art Basel fair, and “almost fell over.” They awakened her memories of that early visit, and of her grandmother’s stories. A teenager when her parents were arrested by French Vichy police, the grandmother was saved at the last minute from boarding a train to Auschwitz, then spent the rest of the war hiding in convents.

Sheldon had just taken over MOCA, then emerging from a period of financial and organizational turmoil, and was looking to make a mark with projects with under-explored artists. But she also saw in Maryan’s art and extraordinary story a legacy that would resonate powerfully not only in the Jewish community, but amongst Miami’s many immigrants — especially the many Haitians in North Miami. Maryan’s art spoke to broader histories of trauma, resistance, diaspora and resilience.

“I Am Maryan” is the largest exhibit MOCA has ever mounted. The museum tore out all its interior walls and built new ones for this show. Curated by Alison Gingeras, who has curated shows at New York’s Guggenheim Museum and the National Museum of Modern Art and the Centre Pompidou in Paris, it includes not only artwork, but archival materials, a re-creation of Maryan’s studio at the Chelsea, and exhaustive scholarship for a 250-page catalogue.

The most comprehensive show of Maryan’s work ever exhibited, the MOCA show opened during Miami Art Week in early December, when Art Basel Miami Beach and other major art fairs bring the international art world elite to Miami. It continues through March 20, with programming that links Maryan’s work not only to Holocaust education, but to issues of immigration and human rights; then travels to the Tel Aviv Museum of Art in 2023.

A text by Marlene Daut, a professor of African Diaspora Studies at the University of Virginia, relates Maryan’s series of horrific Napoleon portraits to the mostly ignored history of the French emperor ordering the genocide of Black inhabitants of Haiti in 1802, as he tried to re-enslave the former French colony.

Kenneth Roth, the executive director of Human Rights Watch and the son of a refugee from the Nazis, contributed a text on the importance of remembering Holocaust history amidst a rise in antisemitism, racism, and attacks on migrants.

The museum is screening Strange Victory, a pioneering 1948 documentary on racism, and Alain Resnais’ 1955 Holocaust film Night and Fog; and hosting discussions on racism; spirituality and activism; Jewish Diaspora and community; and the role art plays in healing and identity.

The Maryan exhibit at MOCA in Miami Courtesy of MOCA

MOCA is also producing a virtual tour and talk on the show for the Holocaust Memorial of Miami Beach, which will distribute it to 350,000 Miami-Dade and 2.79 million Florida public school students on Jan. 27, International Holocaust Memorial Day.

“The Holocaust too often gets isolated, only studied in the context of Jewish history. The thought is that only Jews care about it,” said Oren Baruch Stier, director of Florida International University’s Holocaust and Genocide Studies Program, who wrote an essay for the Maryan show.

MOCA’s exhibit, he said, “brings an understanding of one Holocaust survivor’s experience into a broader context in a way that’s very accessible to lots of people. That’s what we want.”

The most powerful Jewish artist you’ve never heard of