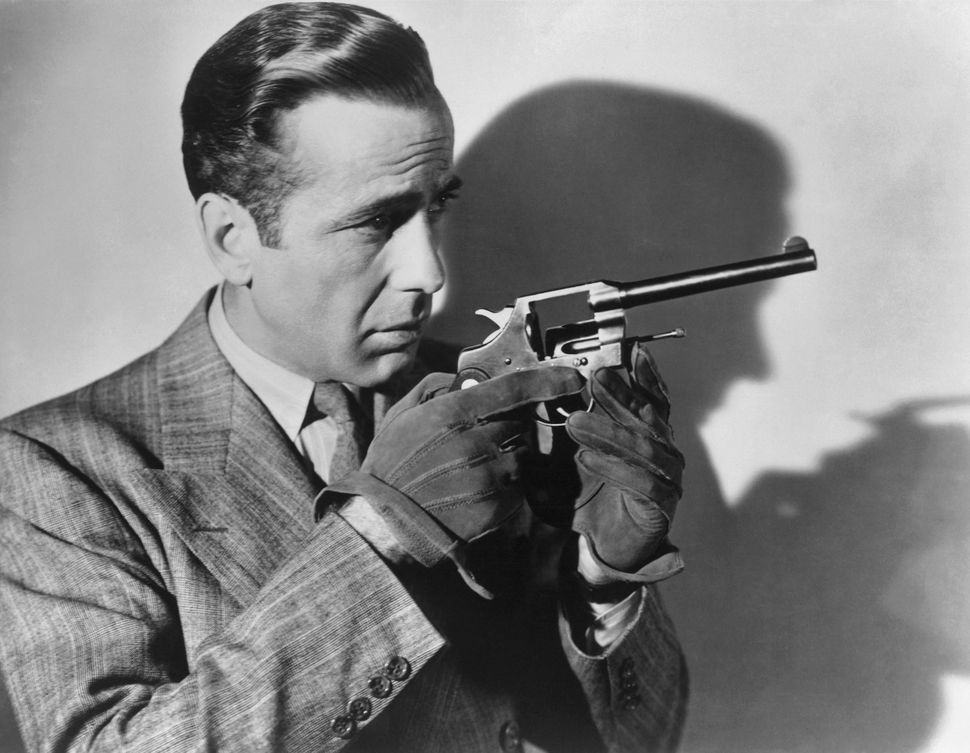 This Gun For Hire: Humphrey Bogart on the set of the film “All Through the Night:” By Getty Images

Eighty years ago this month, Warner Brothers released “All Through the Night,” a comedy-drama about reformed gangster “Gloves” Donahue who, upon learning the German baker of his favorite cheesecake has been murdered, uncovers, attacks and breaks up a secret Nazi spy cell in New York’s Yorkville neighborhood with the help of his colorful Runyonesque criminal cohort.

The Chicago-born Rosten, best known today for “The Joys of Yiddish,” was already a savvy sociology wunderkind when he took the literary world by storm in 1936 in a series of 30 feuilletons for The New Yorker about the exploits of a malapropic Yiddish-speaking night school attendee. The series resulted in a best-selling book, “The Education of HYMAN KAPLAN,” and, thereafter, a seemingly unbroken series of popular platforms for his curious, literate and enlightening explorations.

Rosten came to Hollywood in 1939 on a two-year $100,000 grant from the Carnegie and Rockefeller Foundations to study and report on the sociology of Hollywood (an approach he had successfully taken with a book on Washington D.C. journalism).

He quickly became part of the community he came to study, soon even minting his own bon mots (about W.C. Fields: “Any man who hates babies and dogs can’t be all bad.”) In addition to the story for “All Through the Night,” Rosten also hand a hand in writing the noirs “The Dark Corner” (1946) and “Lured” (1947), both of which starred Lucille Ball. 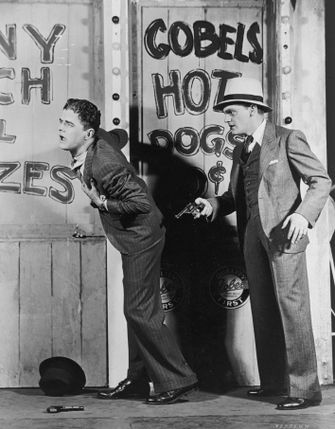 Bad Day on Coney Island: Jimmy Cagney guns someone down in the play ‘Penny Arcade.’ By Getty Images

In 1941, the movie trade journal Boxoffice touted “All Through the Night” as a “comedy gangster tale” for James Cagney, who had learned his own fluent and slangy mame loshn a boy on the streets of Yorkville — the setting of “All Through the Night.” One year earlier, Cagney had wowed movie audiences with his sassy Yiddish in the hit feature “The Fighting 69th” just as he had done in his second starring vehicle, “Taxi!” (1932) opposite Yiddish actor, Joe Barton.

But it was not to be.

Within a month, Cagney was replaced by George Raft with the addition of love interest Marlene Dietrich, trying to capitalize on their success in the recent “Manpower.” Raft, (who had an uncredited cameo appearance in “Taxi”) was notorious for turning down scripts: he had already rejected the part of “Mad Dog” Earle, in “High Sierra” and Sam Spade in “The Maltese Falcon,” before also turning down this script en route to declining the part of Rick in “Casablanca,” giving four consecutive star-making roles to the backbenched Humphrey Bogart, catapulting his career.

Four members of the cast of “All Through the Night” (Bogart, Conrad Veidt, Peter Lorre and Ludwig Stössel) would soon be reunited on the set of “Casablanca.” Marlene Dietrich, who had bowed out early on, was temporarily replaced by Olivia DeHaviland before the part went to Karen Verne, the soon-to-be wife of Peter Lorre, whom he met during filming.)

“All Through the Night” was bought by Warner Brothers while America was at peace and was in production when Pearl Harbor was attacked. Studio execs sped up the production to fulfill a previously unanticipated and unthinkable need: to lift the spirits of a recently sucker-punched American people by showing American tough guy gangsters beating Nazis.

But where would the inspiration come from?

The story behind the story of New York gangsters versus Yorkville Nazis may have its roots in the riot April 20, 1938, when a group of some 100 Jewish World War veterans from Brooklyn, surreptitiously slipped in among 3,500 attendees of a Bund rally at Yorkville Casino where they were celebrating Hitler’s 49th birthday.

Though they had only intended to observe and report back to their American Legion post, after several incendiary speeches, Jewish veteran Jean Mathias stood and yelled out, “Is this a German or an American meeting?” triggering a free-for-all, which sent the vastly outnumbered Mathias and several other Jewish American Legion members to the hospital. Not only would the American Legion shortly condemn its own members for participation in the melee, the only one convicted of violence was a Jewish war veteran, who received a $25 fine, while the only Nazi charged (for brandishing a concealed dagger), was famously acquitted thanks to his Jewish lawyer. 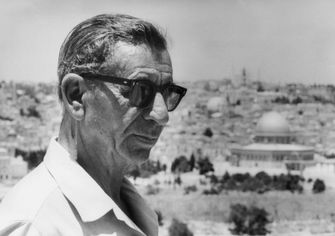 In what would have made a great B-movie plot device, Perlman, who by day was a crusading justice against New York gangland figures, was by night empowering other gangland figures into an armed Jewish militia, by providing them both cover and vital data, all under the leadership of Meyer Lansky.

In interviews Lansky gave later in life, he said that he had been approached by Judge Perlman. In exchange for legal and financial assistance (which Lansky declined,) Lansky and his chosen criminal landslayt would, for the next year carry out serial violent attacks (short of killing) at Nazi events around New York City.

“We got there in the evening and found several hundred people dressed in their brown shirts. The stage was decorated with a swastika and pictures of Hitler. The speakers began ranting. There were only 15 of us but we went into action,” Lansky recalled in “Meyer Lansky: Mogul of the Mob.” “Most of the Nazis panicked and ran out. We chased them and beat them up and some of them, they were out of action for months. We wanted to teach them a lesson. We wanted to show them that Jews would not always sit back and accept insults.”

In “Strangers and Natives: The Evolution of the American Jew from 1921 to the Present,” poet and journalist Judd L. Teller described a bloody Lansky raid where, while some confederates filtered in among the unwitting attendees, the majority waited outside for a signal to overwhelm the guards, storm the hall and violently disrupt the meeting. “Like commandos, they were gone before the police arrived,” Teller noted.

Curiously, Teller’s description of Lansky’s savage pincer attack in Yorkville can be said to have a “Hollywood ending” in that it describes perfectly the penultimate fight scene in “All Through the Night.” 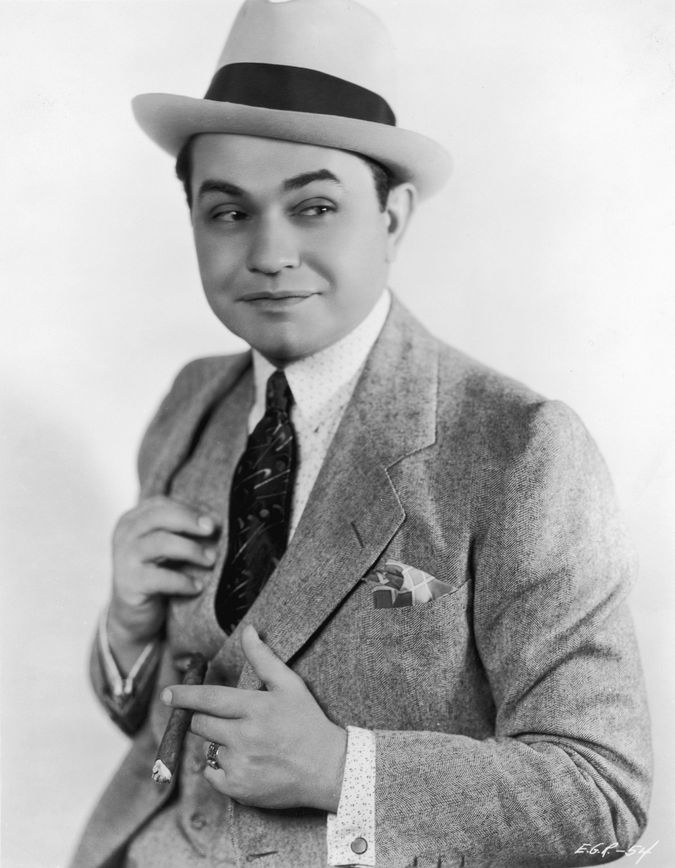 A Jewish Actor Who Didn’t Play Jewish Gangsters: The role that Humphrey Bogart played in ‘The Petrified Forest’ was originally supposed to go to Edward G. Robinson. By Getty Images

Could the literate, curious and very well-informed Leo Rosten have had knowledge about these guerilla events and the “Perlman-Lansky Pact” and if so, did his original James Cagney pitch accurately reflect its singular Jewish source? On these questions, Rosten’s voluminous papers at Brandeis University, are silent.

There is something irresistible about the idea that somehow Humphrey Bogart – the fourth of the Warner’s iconic screen gangsters thanks to his role in 1936 “The Petrified Forest” a part originally intended for Edward G. Robinson – was the only one of the four to portray and celebrate a Jewish gangster.