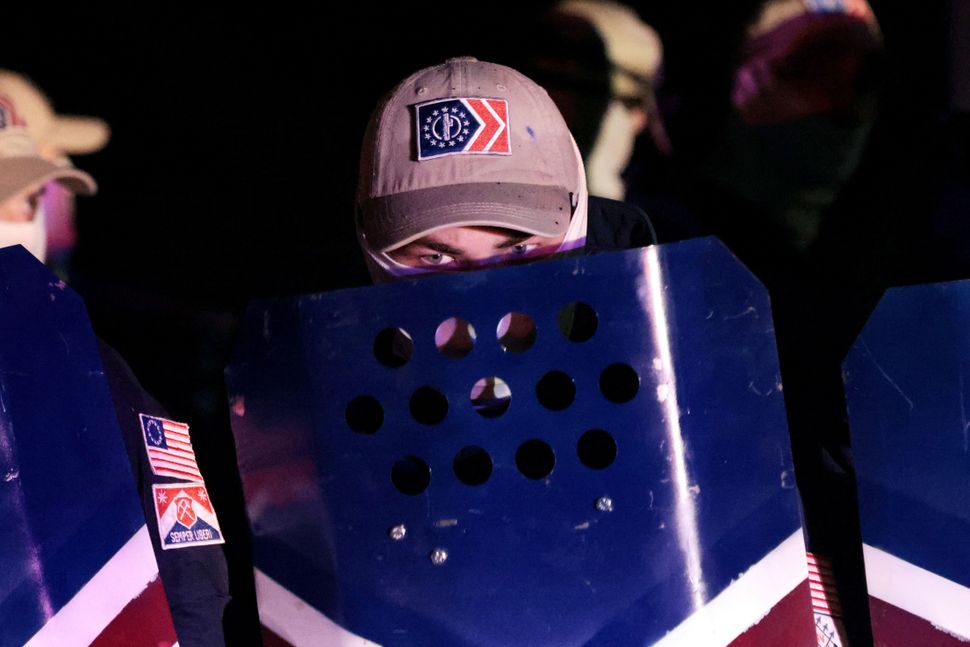 Right Wing March: Members of the rightwing group Patriot Front gather for an unannounced rally on December 04, 2021 in Arlington, Virginia. Patriot Front broke off of the white nationalist group Vanguard America after the deadly “Unite the Right” rally in Charlottesville, Virginia in 2017. By Getty Images

The dramatic 16-day courtroom trial, which ended with a whopping $26 million in damages assessed to more than a dozen individual white supremacists and hate groups for their role in the deadly Unite the Right rally in Charlottesville, Virginia, also offered a window onto what’s really happening inside today’s far right.

Among the courtroom observers was the eminent historian James Loeffler. Loeffler, who directs the Jewish Studies program at the University of Virginia, tweeted throughout the trial, providing updates in real time. Forward language columnist Aviya Kushner wanted to hear more about what Loeffler saw and heard — and whether he thought dangerous rhetoric from the past made its way into the courtroom. Their conversation has been lightly edited.

Aviya Kushner: I have been fascinated by your Twitter feed and the concept of a historian live-tweeting a trial with major implications for how we understand antisemitism and white nationalism. What was it like to be in the room, day after day, hour after hour? What do you think a historian can observe that a journalist might miss?

James Loeffler: Journalists are history’s first responders. They rush in urgently and with no small amount of courage. They grab quotes and facts and wrestle them into a story.

Historians are after-action people. We like to take our sources from a distance; it’s that time gap that affords us a different perspective. So, it’s a strange experience to sit in a courthouse for an event like the Charlottesville Trial and watch and listen to the story unfold in real time.

While the journalists searched for news hooks in a slow-moving trial with lots of gruesome detail but relatively little courtroom drama, I focused more on the symbolic language used by the defendants and their lawyers. Many reporters gasped when antisemitic or racist words were uttered in court.

To me, the words themselves were less striking than the subtler deployments of Christian antisemitism. Both in his opening and closing arguments, “alt-right” ideologue Richard Spencer presented a little speech about “two kinds of justice.” He compared himself to the biblical scapegoat and Jesus, both of whom he characterized as martyrs killed by ancient Jews.

Beyond the bombast and self-aggrandizement, his words evoked deep Christian tropes of Jewish bloodlust and deicide, as well as a broader dichotomy between false Jewish justice and true Christian justice: Jewish tribal vengeance and legalism versus the higher law of Christian ethics and universal redemption. Spencer was not only trying to smear his courtroom opponents as vengeful Jews; in my hearing, he was also trying to trigger deep Christian patterns of unconscious bias in his audience of jurors.

I’m struck by your phrasing of “false Jewish justice and true Christian justice.” Do you see any connection between that “false” and “true” framing and the popularity of the idea of “fake news?”

That’s a fascinating idea, but I think its origins lie elsewhere. Most of the American idea of “fake news” can be traced back to the Nazi movement’s concept of “Lügenpresse.” They took a World War I-era term for “enemy propaganda” and used it to demonize the media as a Jewish, Communist and anti-Fascist conspiracy. That said, we have definitely seen how Christianity has seeped into Trumpian political culture and shaped many other elements of the political theater so central to the populist imagination.

In a 2019 piece for The Atlantic, you wrote that “most American Jews feel powerless to fight antisemitism, trapped in a simplistic understanding of the First Amendment.” You noted that Jewish lawyers have repeatedly defended the right of neo-Nazis to make terrifying statements. But Charlottesville, of course, turned violent. What does the law have to offer in terms of preventing future violence? And do you believe this trial can serve as a deterrent?

The law has a lot to offer an American Jewish community in the way of resources for combating antisemitism. But it only works if Jews choose to use it. Right now, I am struck by a fundamental American Jewish ambivalence about civil rights law. There are those who insist government must do more to protect Jews, but they often shy away from promoting the use of available legal remedies. Jewish students are encouraged to report hate speech to social media accounts, but little time is spent teaching them about their legal rights under state and federal law.

The Charlottesville trial was a terrific chance for Jewish communal leaders to educate their people about legal options and to start a conversation about what kind of legal protection American Jews want. We should be discussing and debating, for instance, the pros and cons of hate speech codes and civil lawsuits. Instead, we are mired in tiresome arguments about whether antisemitism is really worse on the Left or the Right.

I know it’s early — the trial wasn’t that long ago — but are you noticing any uptick in interest from Jewish communal leaders on the courts as an avenue to combat hate? And are you aware of any rabbis talking about this from the pulpit?

I have yet to see any significant change. But I am hopeful that rabbis and communal leaders will focus more on the legal arena, especially now that some of the legal strategies from the trial have re-emerged in the new legal efforts to hold rally organizers and President Trump accountable for Jan. 6.

History echoed constantly throughout the trial. Of course, the frequent trope that Communists and Jews were one and the same ties back to the Judeo-Bolshevik myth which animated Nazism and fueled decades of anti-Jewish persecution in Communist Eastern Europe. The same goes for the “globalist” slur, which has roots in Stalinist Russia and has become a mainstay of the post-Communist Right.

What was more striking, however, was the parallel between the language of this moment and the 1930s and 1940s in American society. There you had white supremacists, who often called themselves Christian Nationalists, using near-identical language about Communist Jews ruining American freedom and dragging America into a war in the Middle East on behalf of Zionism. There, too, you had similar coded language about (Jewish) liberal elites mongrelizing America through support for the end of segregation and greater immigration and refugee admissions.

These semantic links are dangerous, both because they desensitize American ears to the damaging force of hate speech and help recruit more followers for their movement, but also because they force Jews into the trap of having to disprove conspiracy theories about Jewish power. History shows that refuting antisemites is a losing game.

I have to say that I was shocked when a defendant claimed that “Nazi” is a slur—and I was grateful that you were there to tweet it. Is this framing — that “Nazi” is a “slur” – something you had encountered before? How dangerous do you think it is?

This caught me by surprise, too, although it’s not the first time I’ve encountered it. There is a line between some of this kind of outrageous revisionist rhetoric that runs back to George Lincoln Rockwell, a career Navy man who in 1959 started the American Nazi Party and reportedly coined the term “White Power.”

Given the strained logic, I find it less dangerous than some other verbal formulations. But it is important as an indication of how neo-Nazis seek to domesticate their language in order to Americanize its appeal.

This tweet of yours caught my attention: “A revisionist exchange now about Hitler, Nazism and Mein Kampf. Also, Heimbach does not believe Hitler murdered 6 million Jews.” What has this trial taught you about how prevalent these revisionist views are — and how much the Jewish community should worry about them?

What I learned at this trial is that the newest breed of Holocaust denial dispenses with the classic attempt to sow doubt about whether the Holocaust happened. Instead, the American white supremacist culture simultaneously denies and celebrates the Holocaust. Or, as one witness recounted, when she joined the movement, she was told, “Welcome to the “alt-right,” where the Holocaust never happened and we want it to happen again.”

That self-conscious paradox suggests to me that they are the true postmodernists who relish their own ability to play with truth and fiction.

On Nov. 9, which of course is the anniversary of Kristallnacht, you commented on white nationalist David Parrott’s particular use of language. You tweeted: “His rhetorical strategy hinges on semantics: Admits antisemitism but says term is meaningless. Admits Jew-hatred but opposes killing Jews b/c “I’m a Christian.” Endorses lynching Zionists but insists “majority of the world’s Zionists are not Jewish” What has this trial taught you about how the words “Jew” and “Zionist” are used in white nationalist circles?

In some respects, this trial presented evidence that white nationalists talk just like many other kinds of antisemites. Some of them use “Zionist” as a handy public euphemism, while others dispense with any pretense. Some insist that their enemy is not the religion of Judaism, only “organized Jewish power,” a clunky phrase I hadn’t heard before.

Strikingly, though, they did not seem particularly preoccupied with Israel/Palestine. Richard Spencer did refer to Israel as a paradigmatic “ethno-state,” along with Japan, and there are some disturbing parallels between the ideas of the Jewish Far Right and American white nationalists. Yet the term “Zionist” was mostly invoked in reference to the American context, with its “Zionist Occupied Government,” or the specter of global capitalist elites.

You teach at The University of Virginia, where torch bearers screamed “Jews will not replace us.” What is it about having something like this happen so close to home that has affected how you see antisemitism and white nationalism in America? How did this incident change you?

That this all took place at the University of Virginia, in Charlottesville, drove home for me a simple fact. There can be no complete reckoning with the ills of American democracy without addressing antisemitism.

The white supremacists came to Charlottesville to celebrate racism and beat people of color. But most of their hate speech was directed at Jews, even when there were few Jews physically present. This sounds like a puzzle, but it’s not.

By the same token, Charlottesville reminded me that the fight against antisemitism must be pursued in tandem with the larger struggle against color-based racism and religious hatred. American Jews cannot continue to treat antisemitism as some sort of transhistorical disease divorced from other local prejudices. It must be explored in relation to larger questions of discrimination, including key concepts that increasingly divide Jewish communities today, like systemic racism.

Doing that will not be easy, but it is a precondition for Jews to forge the diverse coalitions with other vulnerable minority communities to confront antisemitism alongside other hatreds.

Aviya Kushner is The Forward’s language columnist. She is the author of WOLF LAMB BOMB (Orison Books) and The Grammar of God ( Spiegel & Grau). Follow her on Twitter @AviyaKushner