After the Nazis exterminated a third of European Jewry, surviving remnants of many Jewish communities fled to America. Of those, many came to New York City. And a disproportionate number came to the Boro Park neighborhood of Brooklyn.

More specifically, and roughly contemporaneous with Art Spiegelman’s “Maus,” it was among the earliest examples of art that concern themselves centrally with the formation of second generation survivors in the cauldron of their parents’ trauma.

In this feature-length documentary that won a Special Jury Prize at Sundance, Yossi worries about the apocalyptic 80s that are looming. Later in the film, too, at the World Gathering of Holocaust Survivors, he worries about the challenge of a world where there are no longer any survivors to bear witness. In 2022, as the digitally remastered film is presented by the New York Jewish Film Festival, those concerns seem ever more pertinent. Climate crisis, rising autocracy and social-media abetted intolerance are now our inheritance, the numbers of documented survivors are dwindling — especially the ones with memories of the camps.

Being raised in the Orthodox Jewish neighborhood of Boro Park in the second half of the 20th century meant growing up in the grim, explicit shadow of the Holocaust. Many of Yossi and Karen’s friends had parents who were survivors but didn’t talk about it. For Zoltan, parenting meant getting your children “emotionally prepared” to deal with “what happened and how it happened.” Yossi tells Brand of his recurring nightmare of “being chased by Nazis on the Coney Island boardwalk.” The Nazis would kill him while everyone else kept eating cotton candy.

For Zoltan and then for Yossi, life meant survival and survival meant being ready for genocide at every turn. Europe had been created in microcosm in Brooklyn and that was a point of pride for some survivors who had grasped life from the camps and crematoria. But from a different vantage point, there’s a darker interpretation of the potential of this transplanted culture. As Yossi puts it in the film, “the Belzer Shtiebel is on 47th Street… if Belz was destroyed why couldn’t 47th Street be destroyed?”

According to his wife, Zoltan did not want children. But, as with many survivors, having a family helped him reintegrate into human society, while having Israel helped him identify some hope. Throughout the film we are shown how Zoltan raises Yossi as a peer, not as a member of the next generation. Yossi explains that he was filled by his father’s story, while his own emotions were so repressed that “it was as if my real life was underground.” And even his simile has echoes of the grave-like “bunker” in which Zoltan survived years of the Holocaust. Twenty-something Yossi reminisces how the “first thing I wrote was his story… ‘Out of the Clutches of Death.’” As an 8 or 9-year old he sent it to the Jewish Press and they published it as a full double-page spread.

When “Kaddish” first came out in 1984, the New York Times’ film critic Janet Maslin said the film captured “a lively sense of the father-son dialogue that existed between Yossi and Zoltan, and,” she added, “he succeeds in providing a family context for Yossi’s pessimism. In Yossi, the film has an intelligent and provocative spokesman.”

Since then, Yossi Klein Halevi has gone on to become a highly successful writer in English, albeit from his vantage point in Israel. On top of decades of reportage for The Jerusalem Report and The New Republic, his books “Memoirs of an Extremist” (1995), “Like Dreamers: The Story of the Israeli Paratroopers who Reunited Jerusalem and Divided A Nation” (2013) and “Letters to My Palestinian Neighbor” (2018) have won him acclaim, repeat appearances on the New York Times bestsellers list and a senior fellowship at the Shalom Hartman Institute in Jerusalem (for whose North American sister organization I worked in 2019 and 2020).

Now, finally, he can, mostly, watch the film without cringing at his younger self. In the film, young Yossi is trying to get beyond the heavy influence of his father’s dark past, telling Brand, “I don’t want to survive or not survive, I want to live my life.” But, on Zoom from Jerusalem, Halevi told me how he has come back full circle to the idea of survival and is actually writing about it.

His new book project about the extreme longevity and resilience of the Jewish people is “very much a project of a second generation survivor, trying to define the Jewish people through a survivor lens.” But instead of starting in the “bunker” as his father, mentally, did, Yossi is determined to start in 1945 when the Jews were faced with a moment of truth — would they survive or just collapse under the weight of the tragedy.

“Humanity is reaching the point where we are going to have to choose between extinction and transcendence. It’s a terrifying moment in history. But the Jewish people did that in 1945 transcending the possible and creating [in the state of Israel,] their wildest fantasy.” 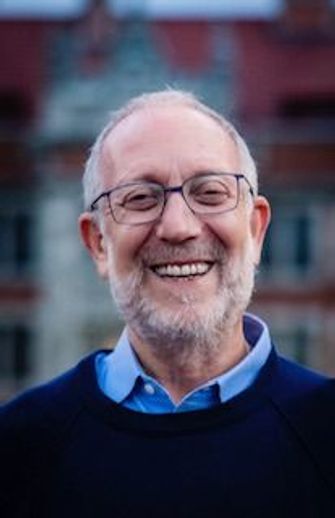 The documentary subject today: Yossi Klein Halevi has gone on to become a highly successful writer in English, albeit from his vantage point in Israel. On top of decades of reportage for The Jerusalem Report and The New Republic, he has written such books as “Memoirs of an Extremist” (1995), “Like Dreamers: The Story of the Israeli Paratroopers who Reunited Jerusalem and Divided A Nation” (2013) and “Letters to My Palestinian Neighbor.” By Ethan Roberts

Within a few years of his apocalyptic worries in “Kaddish,” Yossi began to work as a reporter, covering what he calls the “redemptive 90s” that stretched to include the fall of the Berlin Wall, the demise of the Soviet Union, freedom in Prague and “the appearance of gold-toothed Soviet musicians on every Israeli street corner.” I asked him whether he’s optimistic about the future. He looked out of his window at the Israeli separation barrier and made a distinction.

“Optimists believe that things will more or less work out, hopeful people just hope it will and believe that there is a basis in reality for remaining hopeful,” he said. “It’s a very Israeli sensibility to be hopeful.

Though watching “Kaddish” in 1984 — a dystopian year if ever there was one — might have felt like a dramatic introduction to second-generation survivor psychology, watching the movie for the first time in 2022, it’s difficult not to feel the truth of young Yossi talking about a world that is “constantly on the verge. On the verge of annihilation, on the verge of revelation.” In “Kaddish” Yossi — not yet 30 years old — has not yet worked out what his life might be, beyond the survival paradigm. But Yossi of today thinks that the “the film has become a metaphor for where we are now.”

Older Yossi might be calmer and less dramatic, but when he says, looking forward, that we need to embrace “Isaiah’s vision of humanity” drawing together in peace, “or we’re not going to make it” — the choice between annihilation and revelation remains as stark.

“Kaddish” is streaming at the New York Jewish Film Festival from January 20 – 25.