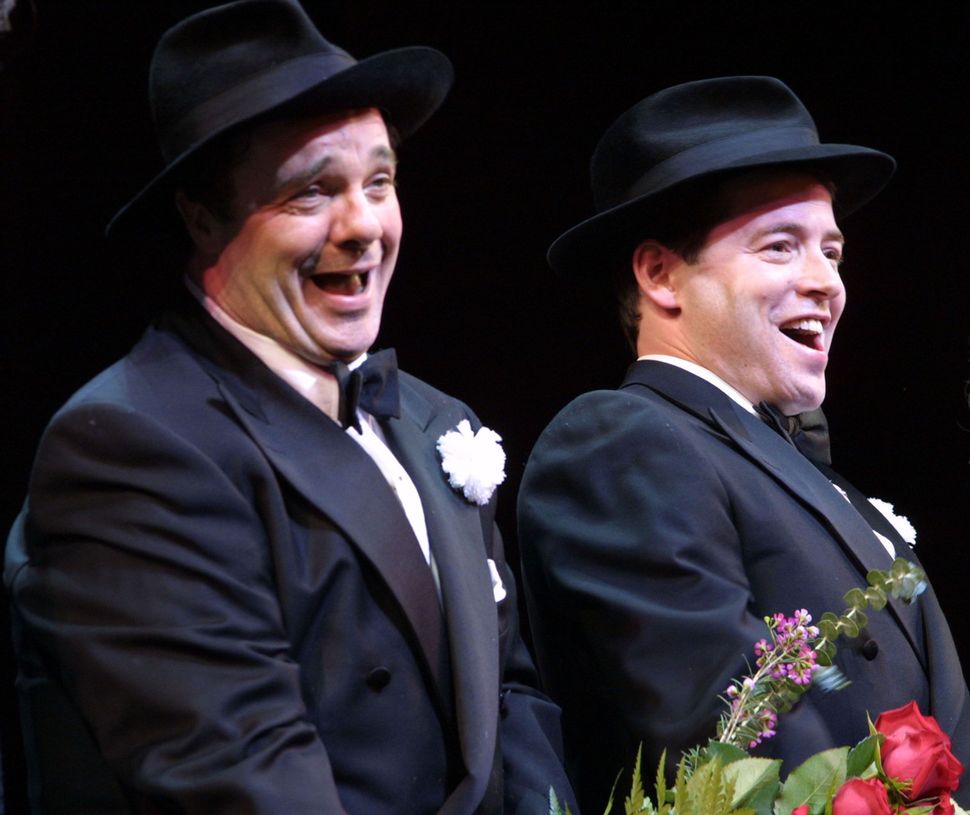 Editor’s Note: Inspired in part by all the Jewish artists on Rolling Stone’s list of the 500 Greatest Songs, the Forward decided it was time to rank the best Jewish pop songs of all time. You can find the whole list and accompanying essays here.

How do you write the worst song of all time? In a world that had already birthed such dreck as “(How Much Is) That Doggie in the Window,” “Clambake,” and “The Surrey with the Fringe on Top,” how do you sink even lower? How do you write an appalling stinker — but on purpose?

That was Mel Brooks’s challenge when he was writing the screenplay for his 1968 movie “The Producers.” The story’s antihero, seedy Broadway producer Max Bialystock, is a schlemiel, but he’s also a gonif, which, in the world of show business, means he has a fighting chance. Then nebbishy accountant Leo Bloom explains that Bialystock could make a fortune by defrauding investors and staging a show so bad, it closes in one night. The two go on the hunt for a talentless idiot playwright. They’re in New York City, so it doesn’t take long.

As the mastermind of this farce, Brooks had to be his own talentless idiot. He had to write a song that would offend an imaginary audience to such an extreme that Bialystock’s show becomes a legendary flop, as opposed to the routine failures to which he was accustomed. So Brooks decided he would write a happy, peppy song in praise of Adolf Hitler.

To make his assignment even trickier, Brooks’s terrible song also had to be a good song; it had to offend the imaginary Broadway audience but entertain the audience for his movie and give them something to hum. The world is full of bad songs, but the most despised ones – “We Built This City,” “(You’re) Having My Baby,” “Ebony and Ivory” – reach that stature by being bad but indelible in both melody and concept.

“Springtime for Hitler,” which Brooks wrote, is a great song, rooted in the Al Jolson and Eddie Cantor hits he had sung at family parties as a kid. The Big Band arrangement, with strings, woodwinds and brass, evokes movie songs of the 1930s. There are no comic effects, no bleating sax or rim shots; the song is played straight, up until the military sound effects near the end. It’s in a major key, the mood is joyous, the tempo change before the tap dancing interlude is tricky, and the choreography and crane shot deliver the uplifting feel of a Busby Berkeley musical. It just so happens to be about a man who killed 6 million Jews.

The fictional audience, as planned, abhors the song. “Well, talk about bad taste,” mutters one walkout whom Brooks means to stand in for the entire bourgeoisie. But the ones who stay laugh uproariously at the dim hippie actor who is playing Hitler, which ruins Max’s and Leo’s plans. To their horror, the show is a boffo smash, and they’re guilty of fraud. The state penitentiary awaits.

But that is fiction. Back in the real world, some people were appalled by the bad taste, and many of them were movie reviewers. The four central critics of the era – Renata Adler, Stanley Kauffmann, Pauline Kael and Andrew Sarris, all Jews except for Sarris – panned it. Jewish organizations, Brooks later recalled, were appalled. When aren’t they? In Germany, where they were not ready for ironic takes, it was banned for violating laws against the display of Nazi symbols. To be fair, there is a massive amount of Nazi content in the movie beyond just “Springtime for Hitler,” including an audition scene that includes the memorable line, “Will the dancing Hitlers please wait in the wings?”

“The Producers” became a cult film, screened on college campuses and in art houses. And then, in 2001, it made an unlikely return as the most popular Broadway musical of all time: garnering 12 Tony Awards, a six-year run, more than $1 billion in ticket sales worldwide. Even Gentiles laughed.

What changed between 1968 and 2001? (Better question: What didn’t?) For one, “sick humor” – a phrase used since the 1950s to deride Lenny Bruce, Tom Lehrer, Mort Sahl, and Mike Nichols and Elaine May, among many (mostly Jewish) comics who joked about taboo topics – became the dominant mode of comedy, thanks to MAD magazine, Dick Gregory, Gahan Wilson, Richard Pryor, the National Lampoon, Chris Rock, Sarah Silverman, John Leguizamo, Lea DeLaria, and on and on. Greater distance from World War II made the topic of the Holocaust less taboo. And Jews felt more comfortable with how far they had assimilated in America – just as German Jews had in the 1930s. Uh-oh.

There are still plenty of people who think it isn’t OK to make jokes about the Holocaust, as I learned when I started doing a music and comedy show about Jewish life more than 20 years ago. It remains the third rail of modern Jewish life. I have been chided more times than I can count, and I’m always dismayed that Jews lag behind other ethnic groups in creating comedy out of oppression. The process of semantic inversion – Black people embracing the N word, or gay women calling themselves dykes – has mostly passed us by. But there were jokes in the ghetto newspapers, and even in the death camps; who are we not to perpetuate that impulse?

While I was performing on Christmas night in 2004, I met a woman to whom I am now married. Her parents were both Auschwitz survivors who eventually settled in San Francisco. My wife is the only one who is allowed to tell me if I can or can’t make Holocaust jokes. And we have a beautiful son who is about to turn 10. Thank you, Hitler!

Rob Tannenbaum is half of Good For the Jews, a music duo that performs funny, unorthodox songs about being Jewish. He’s also the co-author of the acclaimed book “I Want My MTV: The Uncensored Story of the Music Video Revolution,” and is a former contributing editor at GQ, Rolling Stone and Playboy.