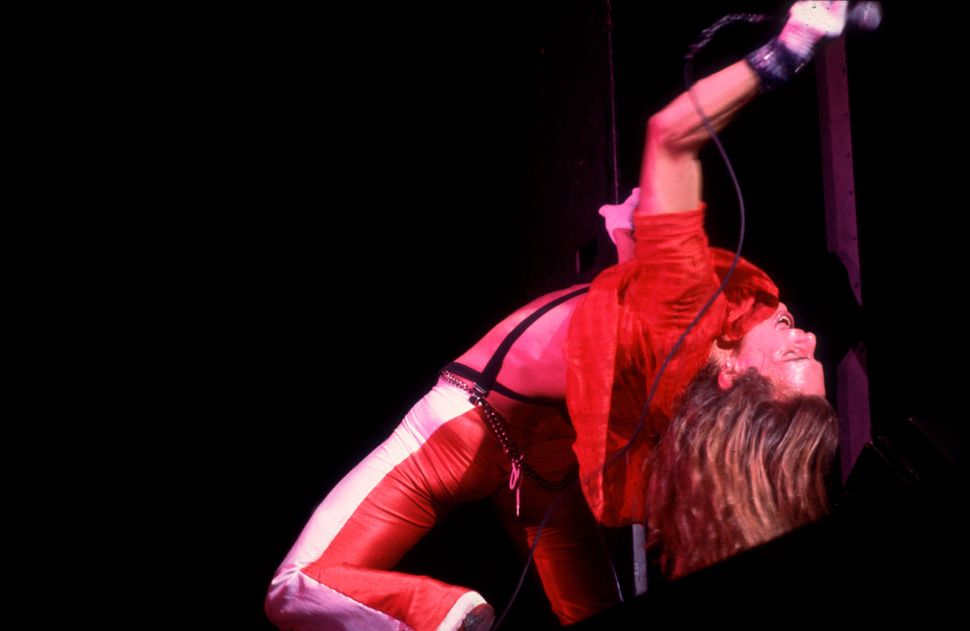 Jump: David Lee Roth shows off the limbo moves he no doubt perfected at a bar mitzvah. By Getty Images

This past week Rolling Stone magazine published an updated list of “The 500 Greatest Songs of All Time.” It was the first time the list has been updated since 2004, and out of curiosity, we combed the list for Jewish performers and songwriters. Depending on one’s criteria — e.g., if a band has a Jewish bass player, does it count as Jewish? (Answer: no, not unless the bassist is also a main songwriter or vocalist) — there are about 70 songs on the list of 500 that have identifiably strong Jewish connections.

Set aside for a moment Rolling Stone’s dubious claim that these are the greatest songs of “all time” — they are mostly songs from the rock era (roughly the mid-1950s until yesterday) — and that the list is chiefly oriented toward popular music and its various styles, e.g., rock, R&B, hip-hop, Latin and dance, at the expense of art songs, Broadway, jazz and religious music. Keep in mind that lists like these are almost designed to provoke arguments and debate. One must also remember Mick Jagger’s sage advice that it’s only rock ‘n’ roll, but I like it (in a song that did not make the list, but arguably should have). Nevertheless, the list does suggest a significant Jewish contribution to the canon, ranging from Carly Simon’s “You’re So Vain” (495) to Bob Dylan’s “Like a Rolling Stone” (4).

While Dylan appears frequently on the list, some may take issue with the fact that “Like a Rolling Stone,” which topped the entire chart in 2004, has been downgraded to fourth place. The top position is now occupied by Aretha Franklin for her version of Otis Redding’s song, “Respect,” and Public Enemy’s “Fight the Power” now claims the number-two spot. Sam Cooke is just ahead of Dylan in third place, for his arresting civil-rights anthem, “A Change Is Gonna Come,” which Cooke acknowledged he was inspired to write after hearing Dylan’s “Blowin’ in the Wind.” Rolling Stone quotes Cooke as saying, “Jeez, a white boy writing a song like that?” 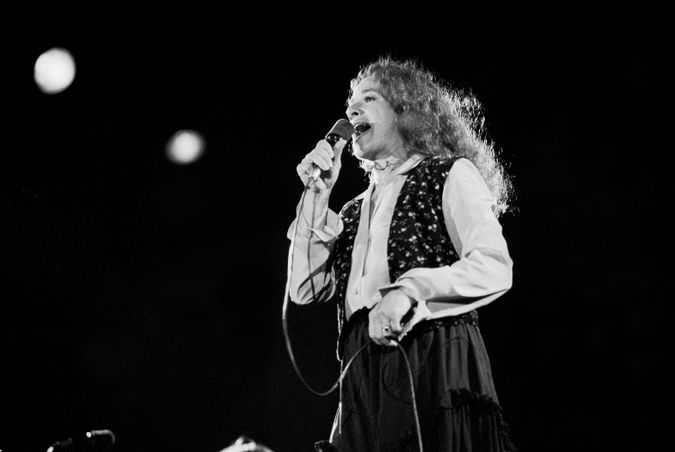 King of the World: The singer-songwriter, born Carol Joan Klein, wrote dozens of hits for other artists, often in tandem with her songwriting partner and then-husband, Gerry Goffin. By Getty Images

The trinity (if you’ll pardon the expression) of Jewish rock poets also includes Paul Simon and Leonard Cohen, and both appear multiple times on the list. Simon gets the honor for “Bridge Over Troubled Water” (66), “The Sound of Silence” (182), and “American Tune” (262), the first two recorded with his erstwhile duet partner, Art Garfunkel. Cohen’s “Hallelujah” (74) of course makes the list, as does “Suzanne” (284).

Perhaps most surprising is one of the list’s top vote-getters. Besides her own string of great recordings, Carole King, born Carol Joan Klein, wrote dozens of hits for other artists, often in tandem with her songwriting partner and then-husband, Gerry Goffin. As a performer, King’s own “It’s Too Late” is at 345, but as a songwriter she gets whole or partial credit for “Up on the Roof” (375) by the Drifters, “Will You Love Me Tomorrow” (151) by the Shirelles, “(You Make Me Feel Like) A Natural Woman” (90) by Aretha Franklin, and “Be My Baby” (22) by the Ronettes.

Other Jewish songwriting teams score big on the list. Like King and Goffin, Ellie Greenwich and Jeff Barry (born Joel Adelberg) were a veritable husband-and-wife hit factory, writing “Da Doo Ron Ron” (366) for the Crystals, “Leader of the Pack” (316) by the Shangri-Las, and “River Deep, Mountain High” (221) for Ike and Tina Turner. Jerry Leiber and Mike Stoller penned several of rock and R&B’s greatest hits, including “Stand By Me” (131), which they co-wrote with singer Ben E. King, Elvis Presley’s “Jailhouse Rock” (216), and Big Mama Thornton’s “Hound Dog” (318), which was also famously a hit for Presley.

The writing team of Burt Bacharach and Hal David penned “Walk on By” (51) for Dionne Warwick, “I Say a Little Prayer” (117) for Aretha Franklin, and “Walk on By” (312) by Isaac Hayes. Norman Gimbel and Charles Fox get the nod twice for “Killing Me Softly with His Song,” once for Roberta Flack’s version (273) and again for a cover by the Fugees (359). And the lesser-known writing duo of Hy Zaret and Alex North (born Isadore Soifer) were no slouches, either, having come up with “Unchained Melody” (269), first written for a movie called “Unchained” in 1955 but which then went on to become a huge hit for the Righteous Brothers a decade later.

Aubrey Graham, the Toronto-born son of Sandra Sher, garnered several spots on Rolling Stone’s list, both as a writer and as a performer better known to the world as Drake. He gets the nod for “Hold On, We’re Going Home” (129), “Take Care” (267), which he recorded with Rihanna, and “Hotline Bling” (373). Formerly Known as Aubrey Graham: Drake, the Toronto-born son of Sandra Sher, garnered several spots on Rolling Stone’s list, both as a writer and as a performer. By Getty Images

Brooklyn-born Lou Reed, who late in his career extolled the virtues of seltzer in a song called “Egg Cream” (which unaccountably did not make Rolling Stone’s list), appears as a solo artist and as the leader of the pathbreaking art-rock group the Velvet Underground. He gets recognized for his solo hit “Walk on the Wild Side” (180) and the VU’s “I’m Waiting for the Man” (81) and “Sweet Jane” (294). Reed’s fellow New Yorkers the Beastie Boys score for “Sabotage” (245), and the quintessential New York City punk-rock group the Ramones, boasting several Jewish members, make the list for “Blitzkrieg Bop” (64) and “Sheena Is a Punk Rocker” (434). Speaking of New York City groups, Blondie, featuring guitarist and songwriter Chris Stein, gets the nod for “Heart of Glass” (138) and “Dreaming” (414).

English producer, songwriter and performer Mark Ronson — who recently posted High Holiday greetings on social media featuring photos of himself wearing a kippah — got several nods, sharing one with great English-Jewish soul singer Amy Winehouse for their cowrite, “Back to Black” (79), and for his collaboration with Bruno Mars, also Jewish, called “Uptown Funk” (417). 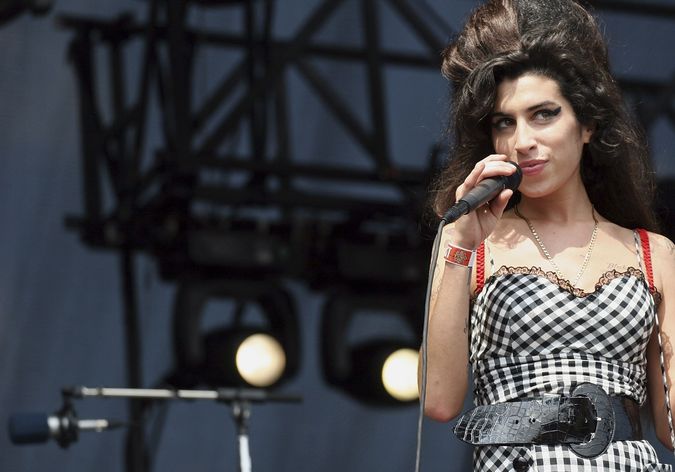 Back to Black: Amy Winehouse made the list for a song she co-wrote with Mark Ronson. By Getty Images

Lewis Allen was the pen name of Abel Meeropol, the high school English teacher who wrote “Strange Fruit” (21), made famous by vocalist Billie Holiday. Robbie Robertson, the chief songwriter and guitarist for The Band, was recognized for the Biblical-sounding “The Weight” (58), and Jonathan Richman snuck onto the list for “Road Runner” (77), a novelty hit for his group, the Modern Lovers.

Guns N’ Roses is not ordinarily thought of as a Jewish band, but its drummer, Steven Adler, is also one of its chief songwriters, and he wrote or co-wrote both GNR songs on the list: “Sweet Child O’ Mine” (88) and “Welcome to the Jungle” (491). The groundbreaking English punk-rock group the Clash was co-fronted by Joe Strummer and Mick Jones, whose mother, Renee Zegansky, was of Russian-Jewish ancestry. Jones co-write the group’s “London Calling” (143) and “(White Man) in Hammersmith Palais” (340).

Beck gets a nod for “Loser” (458) and Marc Bolan (né Mark Feld) for “Cosmic Dancer” by his glam-rock group T. Rex. “I Only Have Eyes for You” (175) by the Flamingos was co-written by Al Dubin, and Randy Newman gets a nod for his timeless classic, “Sail Away” (275). Despite a massive catalog of super hits, Billy Joel scored with his early drama, “Scenes from an Italian Restaurant” (324). The Monkees are recognized for their Neil Diamond-penned hit, “I’m a Believer” (341).

These 70 or so songs may not be the be-all and end-all of Jewish contributions to popular music in the rock era, or even the best of those. But they do serve convincingly to suggest that contribution was significant and influential, as well as provide fodder for plenty of well-meaning, good-natured argument and debate.