In Nazi-looted art case at Supreme Court, one (brief) moment of levity 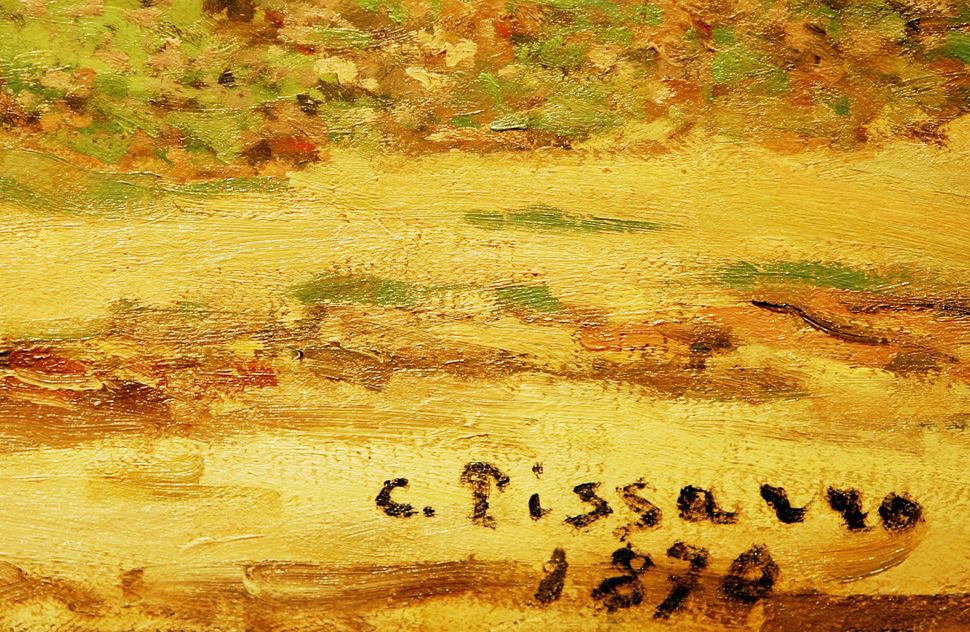 Signature Drawing: The signature of Impressionist Camille Pissarro appears on “Landscape in the vicinity of Louveciennes (Autumn)”, a painting from 1870 at the Art Gallery of New South Wales November 18, 2005 in Sydney, Australia. By Getty Images

Despite being mired in legalese, the oral argument at the Supreme Court for the case Cassirer v. Thyssen-Bornemisza Collection Foundation regarding the Nazi-looted Camille Pissarro painting had one moment of levity. About an hour in, Justice Stephen Breyer asked, “Can everyone agree that this is a beautiful painting?”

It was the first direct mention of “Rue Saint-Honoré, Apres Midi, Effet de Pluie,” and served as a reminder, as The Forward reported previously, that cases involving looted art are often decided on questions of procedural law versus on the merits of the case itself. In this case, a decision will be made on whether section 1606 of the Foreign Sovereign Immunities Act (FSIA), which dictates the circumstances in which a foreign country can be sued in U.S. courts, requires application of California state law or Spanish law.

Thaddeus J. Stauber, partner at Nixon Peabody, representing the Thyssen-Bornemisza Collection Foundation where the painting currently hangs in Spain, sought to minimize the nexus of the case to the state of California, where heir Claude Cassirer lived when he filed the lawsuit in 2005 against the Foundation. Stauber contended that except for Claude’s retirement to San Diego, the state of California would not have an interest in this case. (The smuggling of the painting, in violation of U.S. Military law, from Germany to California in 1951 was not mentioned).

Stauber stated before the court that “Nothing in the Foreign Sovereign Immunity Act or its foreign affairs origins mandates that federal courts sitting in judgment of a foreign state’s private or public acts must employ a forum’s choice-of-law test where the forum has little or no connection to the claims or the basis for jurisdiction and the test ignores the federal and foreign concerns that underpin the FSIA.” He also stated that “Section 1606 relates to the application of substantive law, not to the choice of law test.”

Justice Elena Kagan questioned the line of reasoning, stating that this approach “seems to be treating the foreign state in a way that it’s — it’s really the opposite of the — of the way the FSIA instructs in 1606.” In a line of inquiry regarding the different potential choice of law outcomes, Justice Sonia Sotomayor asked Stauber bluntly, “If California law and federal law, you say, both correctly point to the application of Spanish law, what are you afraid of? You’re afraid of something. You’re afraid that they’re right, that some aspect of California law can hurt you, correct?”

David Boies, Chairman of Boies Schiller Flexner, representing the plaintiffs David Cassirer, the estate of Ava Cassirer, and the United Jewish Federation of San Diego, responded that Congress was clear in the drafting of section 1606 that state actors should be liable in the same manner as a private party, given like circumstances.

“There’s no way, I respectfully suggest,” stated Boies to the Supreme Court justices, “that you can read that language and say that you can have different choice of law rules apply when a state actor is involved than when a private museum’s involved.” Furthermore, he argued that the respondents were arguing over the merits of the law itself, but that is something Congress should decide, not the courts. Boies cited 20 years of law where the court interpreted section 1606 of FSIA and applied state choice of law rules.

The decision of the Supreme Court is expected to be delivered in four to six weeks. Should the court side with the plaintiffs, the case will be remanded down to a lower court to adjudicate based on California state law. If the Supreme Court sides with the Thyssen-Bornemisza Collection Foundation, the decision of the Ninth Circuit Court of Appeals will stand and the Kingdom of Spain will retain ownership of the painting.

In Nazi-looted art case at Supreme Court, one (brief) moment of levity