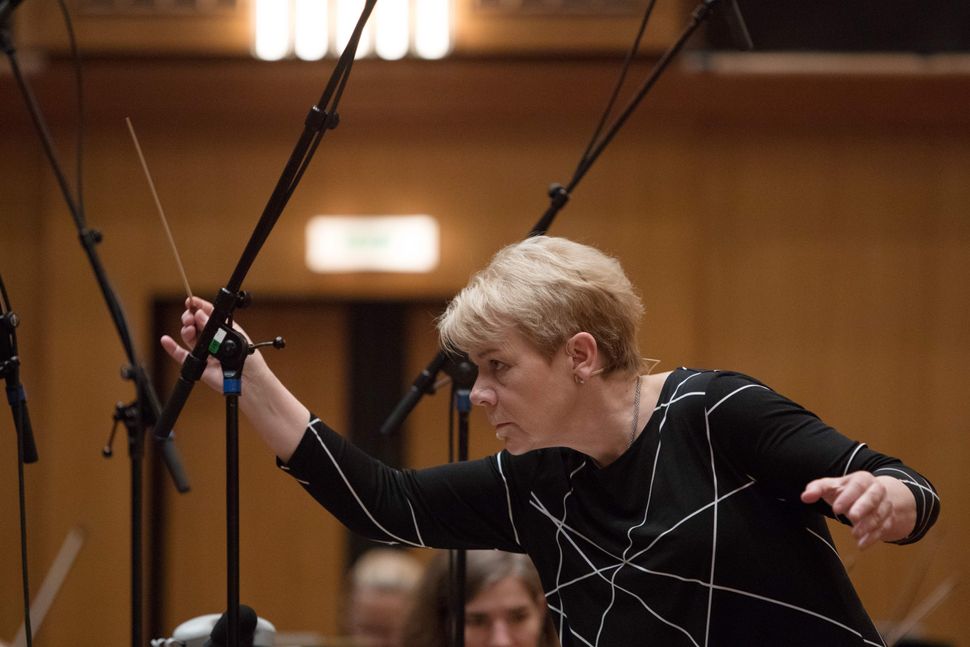 What makes Bernadette Wegenstein’s “The Conductor” such a winning documentary is its title character Marin Alsop, the first woman to lead a major American symphony orchestra, specifically the Baltimore Symphony Orchestra (BSO). The 65-year-old New York native, passionate, steadfast and, devoid of all pretension, is just plain likable. She faced many closed doors, yet persisted with neither bitterness nor rancor. Today she mentors young women and members of ethnic minorities who want to conduct.

Short of a few conductors like Leonard Bernstein (Alsop’s major influence) or James Levine who single-handedly transformed the New York Metropolitan Opera Orchestra and then precipitously fell from grace due to allegations of sexual misconduct, the role of the conductor is not inherently gripping, despite some terrific flicks about conductors that have been released over the years: “Bernstein’s Wall,” PBS’s “James Levine: America’s Maestro,” and Judy Collins’ deeply affecting 1974 documentary “Antonia: A Portrait of the Woman” about Antonia Brico.

It’s still hard to visualize any child growing up with her sights set on being a conductor. But that’s the core of Alsop’s story that began when she attended one of Leonard Bernstein’s concerts for children. Transfixed by Bernstein’s charisma and the joy he so obviously experienced as a conductor Alsop had no doubt what she was going to do with her life.”

Interspersed with archival footage, and black and white stills, the film is told chronologically and is narrated by Alsop herself. The film follows her from country to country as she engages with the musicians and conducts wonderfully rousing scores.

Although Alsop met with resistance from the outset — her violin teacher told her, “Girls can’t do that” — Alsop’s father, who wasn’t pleased with her career choice either, nonetheless presented her with a box of batons as soon as she expressed interest in conducting. She was both a victim and beneficiary of the world from which she emerged. 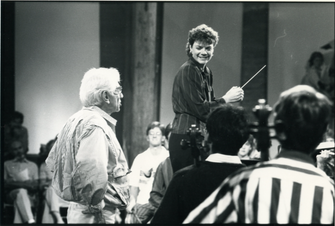 The Anxiety of Influence: Alsop’s road to becoming a conductor began when she attended one of Leonard Bernstein’s concerts for children. Transfixed by Bernstein’s charisma and the joy he so obviously experienced as a conductor Alsop had no doubt what she was going to do with her life. Courtesy of Cargo Films & Releasing

Alsop grew up in a roach-filled basement apartment on the Upper West Side long before the neighborhood was gentrified. She was the only child of freelance classical musicians who eked out a living. She spent a lot of time alone.

The family may seem off-the-beaten track but they were arguably very much of a rarified Upper West Side world in the 50s and through the 60s where cosmopolitanism embodied a love of the arts while eschewing materialism, religion, or ethnic identity for fear of appearing tribal and provincial.

Alsop’s family was Jewish but that played no role in her life. Like “Algren,” a film I reviewed recently about novelist Nelson Algren, also an unacknowledged Jew, that lack of acknowledgment raises questions about the artist and the film’s director who otherwise offers a well-rounded portrait.

Alsop’s parents insisted she take piano lessons which she abhorred. They looked forward to creating a musical trio with their daughter as the pianist, but soon realized that was not going to happen. Alsop ultimately studied the violin, an instrument she enjoyed far more than the piano. She worked hard to master the violin and hone her musicianship, recalling Bernstein’s words, “Any musician can be a conductor, but only a very good musician can be a very good conductor.”

In music camp and at Juilliard’s pre-college music program Alsop encountered some brutal teachers who believed the way to shape great musicians was to “break their spirit” she said and then rebuild them in the instructor’s image. “I don’t believe in you as a human being,” Alsop recalls one teacher saying to her. “I was devastated and thought about quitting music altogether.” I would like to have heard her spin on music teachers today. Would the school still tolerate that kind of abuse?

The film shows Alsop to be catholic in her tastes and savvy in negotiations. In the wake of her Juilliard debacle, she launched an all-female swing orchestra. When she met a well-heeled businessman at a wedding where her swing band was performing, she set up an appointment with him and convinced him to underwrite her orchestra. Still, years of freelance gigs with various symphonies followed before she landed her steady post at BSO. She is now beginning her third year as chief conductor at the ORF Vienna Radio Symphony Orchestra. Alsop marvels at Bernstein’s barrier-busting appearances in 1948 Vienna. The image of an American Jew telling Viennese musicians how to play Mahler, especially in those postwar years, seems to thrill her.

In the film, Alsop’s personal life is handled almost as an after-thought, an incidental. We learn that she now lives in a beautiful home in the Baltimore area, where she is married to Kristin Jurkscheit, a horn player. They are parents to a teenage son. 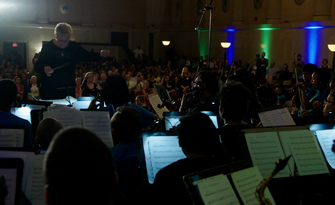 Mentor and Conductor: Unlike some brutal teachers she knew who believed the way to shape great musicians was to “break their spirit,” Alsop has dedicated herself to helping young musicians and conductor. Courtesy of Cargo Films & Releasing

It’s hard not to contrast the offhand treatment of Alsop’s sexuality with the way Bernstein’s is treated in the documentary, “Bernstein’s Wall.” Unlike hers, his sex life was a deeply private matter and there’s a hint of shame about it and secrecy as there is in Judy Collins’ film about Antonia Brico.

A feminist thread runs throughout “The Conductor” and that’s to be expected given that the Austrian-born Wegenstein’s best-known documentary is “The Good Breast,” which explored cultural attitudes toward woman’s breasts and the overuse of mastectomies in the treatment of breast cancer. Although politics are inherently present, “The Conductor” is a much lighter film. It’s an optimistic, life-affirming, archetypical story: a woman goes on a quest, battles the dragons and wins against all odds.