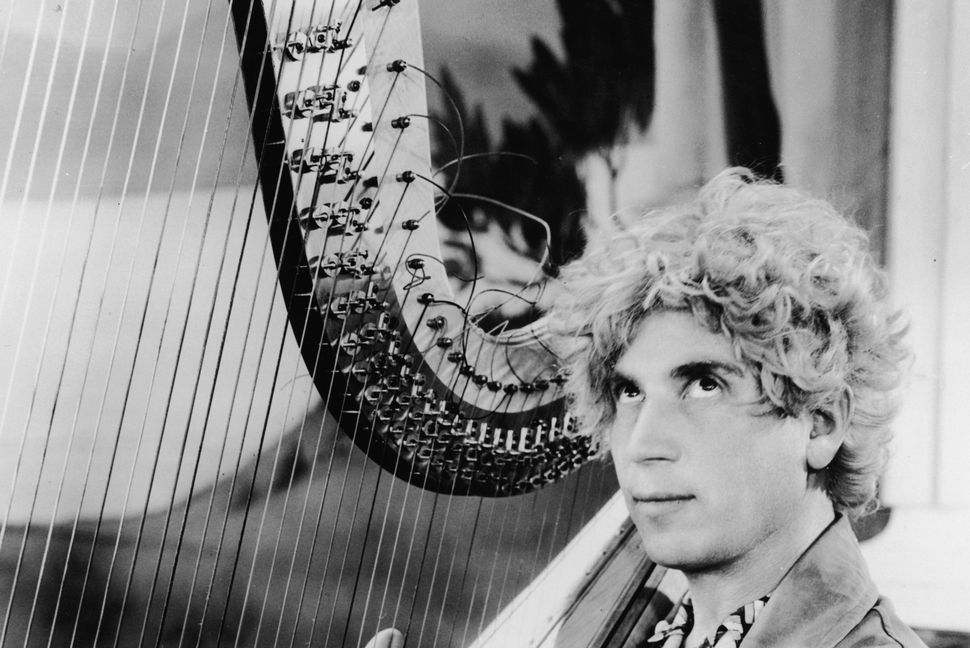 Harpo Marx in an unidentified Marx Brothers film from the 1930s. Photo by Getty

In March of 1941, a 72-year-old German Jewish widow named Helene Schickler was waiting to join her family in the U.S. She was then living in a convent in Naples with other refugees, and the nuns hosting them were running out of food. She was losing weight, strength and hope.

A doctor came to examine Schickler to determine if she could survive the journey to a concentration camp, where foreigners who couldn’t leave Italy voluntarily had begun ending up. A visit to the local police station made her all the more uncertain she could remain in the country she had fled to two years prior, after Kristallnacht. Even though she had a visa to come to America and a ticket to get there from Lisbon, the Portuguese authorities wouldn’t let her through. She was stuck.

Desperate, she wrote to her son in Boston.

“If you cannot do anything from your end, I don’t know what is going to become of me,” she wrote. “I’m very sorry that I have to ask you for help again and again and I am wondering if it will ever end. I assure you that I am tired of living for I don’t think life has anything in store for me.” She signed the letter “your lonesome mother.”

Schickler’s distress reached her family, and within a week her famous nephew made an appeal on her behalf. On April 4, 1941, on Metro-Goldwyn-Mayer letterhead, Harpo Marx broke his famous silence, writing U.S. Minister to Portugal Bert Fish about his aunt’s “very worthy case” to solicit his “cooperation in bringing about a timely solution.”

That Harpo, the mute, cherubic member of the famed comedian brothers, once tried to help this relative escape Europe appears to be a little-known fact, absent from his autobiography and other writing about the family. Researcher Amanda Kluveld of Maastricht University in the Netherlands discovered the letter while researching the Holocaust in files for the U.S. Embassy in Lisbon.

“I suddenly saw the MGM logo and I was reading and then it said ‘Harpo Marx,’” said Kluveld. “I thought ‘well, that’s not a really common name.’”

Kluveld was struck by Marx’s polite appeal to Fish, printed with the famous studio logo sure to grab attention. It’s a short missive, describing Schickler’s predicament and asking Fish to use his influence to help her obtain a Portuguese visa to take “a certain steamer to Lisbon.”

“Under the circumstances, I feel that her case justifies preferred consideration,” Marx wrote.

Sadly, Marx’s effort did not work. In a terse letter dated April 17, 1941, Fish replied that the “Portuguese Foreign Office will not accept interventions from this legation for other than American nationals.” Normally, Fish wrote, he would work with the German embassy in Lisbon for the case of a German national like Schickler, but that given the circumstances, approaching his German counterparts would “be improper.” 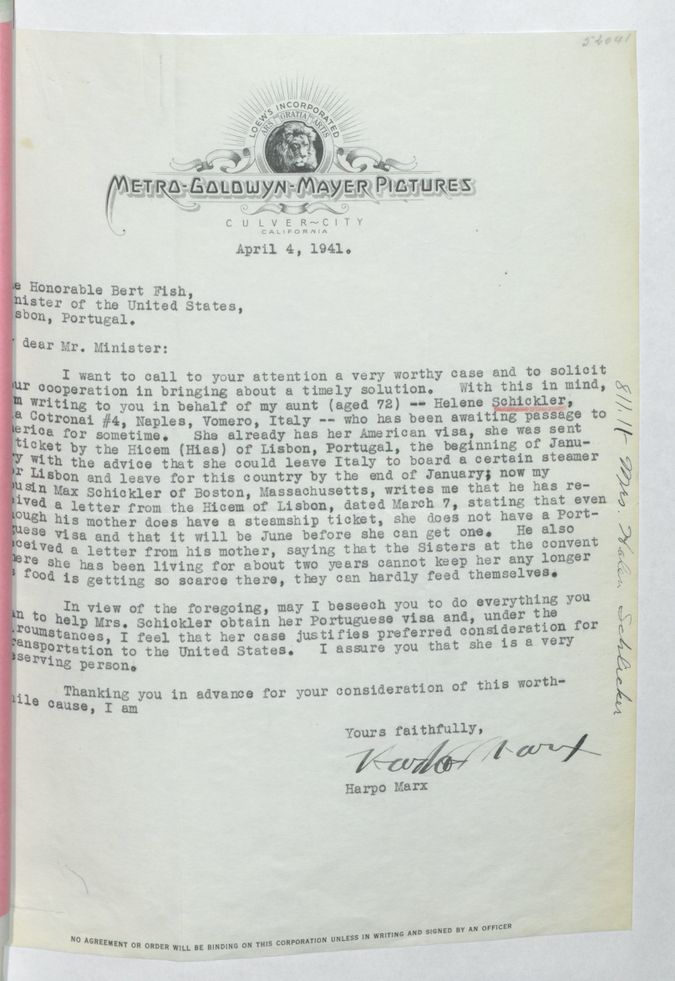 Harpo’s letter was typed on MGM letterhead. He assured Bert Fish that his aunt was a “very deserving person.” Courtesy of U.S. National Archives

A day after Fish wrote his response to Marx, Schickler’s son Max pleaded his mother’s case, enclosing a translation of her letter to him from the month before. Fish does not appear to have responded.

What happened to Helene, Kluveld says, is uncertain. An “Elena Schickler,” whose date and place of birth are not recorded, can be found in the Yad Vashem archives in a list of Jews arrested in Trieste, in northern Italy. Kluveld believes she may have somehow ended up there from Naples, where she would likely have been placed in the Isiera di San Sabba concentration camp before being deported to Auschwitz.

It is possible that Elena (the Italian version of given names were commonly used in Italian records) was Helene Schickler. If she ended up at Auschwitz, it is quite likely that she was murdered there.

While it was a marquee name that made Kluveld – and likely Bert Fish – take notice of this letter, it is people like Schickler, whose fates are unknown, that motivate her research, which typically involves the Amersfoort concentration camp in the Netherlands.

“We are now only studying how the Holocaust is memorized or remembered,” said Kluveld. “I try to find out how did these people live? How did they end up? Who were their families?”

When it comes to Schickler’s family, Kluveld was amazed to learn that Marx was a more distant relative than he had claimed. Schickler was not his aunt, but the sister-in-law of his maternal aunt Hannah Schickler.

“I really like that he says that she’s his aunt,” said Kluveld, recalling how Marx said he didn’t adopt his children, but brought them home.

“I think that’s what he also tries to do here,” Kluveld said. “He just says ‘this is my family member and I’m going to bring her home.’ That’s what he wants to do.”