Could Israelites be brought into mainstream Judaism? 50 years ago, one effort did just that 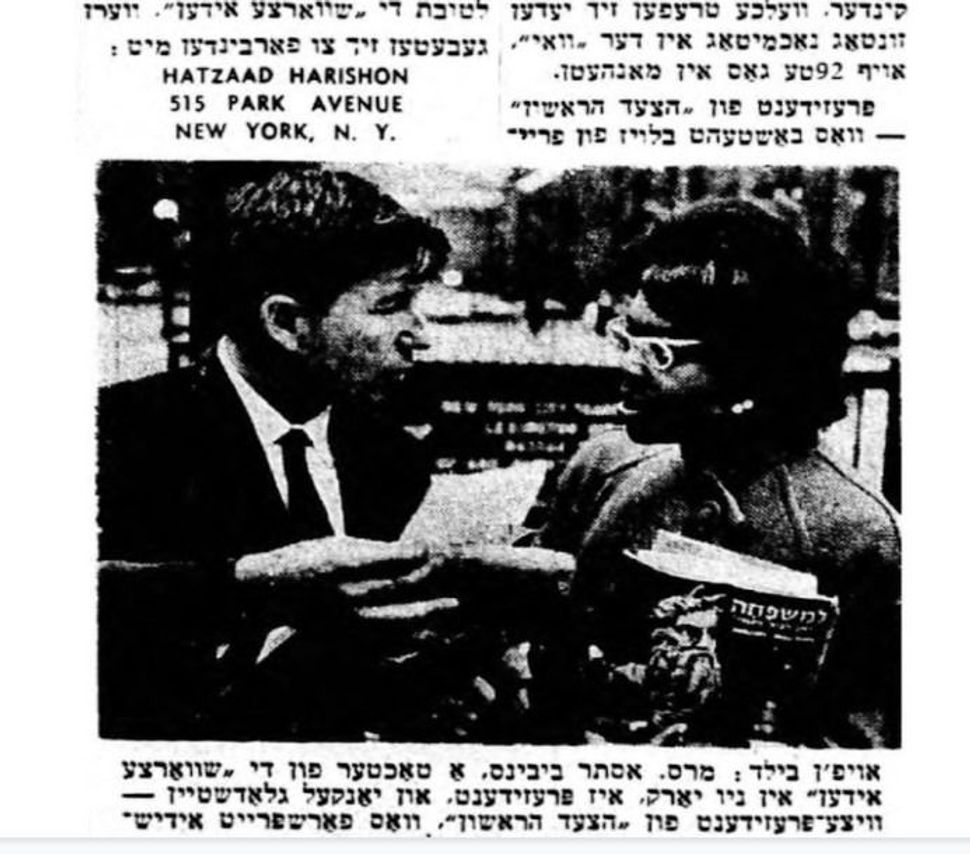 A Forverts article from Nov. 19, 1965 shows Esther Bibbins, right, the president of Hatzaad Harishon, speaking with Yaakov Gladstone, the organization’s executive director, discussing a planned Hebrew book fair at a Black Jewish school in the Bronx. By Forward Association

Can mainstream, largely white, Jewish organizations and individual Jews reach out to Black Israelite groups? And should they, even if many view the historically Black congregations as not “real Jews”?

And if they’re not real Jews, is it time to bring them into the fold?

Before attempting to answer those questions, know that an effort to do exactly that happened more than half a century ago. It folded after eight years, but in many ways, it thrived.

The project was called Hatzaad Harishon, Hebrew for “the first step.” It began in 1964, when Irving J. Block, an ecumenically minded Conservative rabbi and founder of the Brotherhood Synagogue in Greenwich Village, teamed up with Yaakov Gladstone, a Canadian Jew who was teaching Hebrew songs to a Black congregation in the Bronx.

The vision was to bring “black and white Jews” together, with its leaders unhesitatingly referring to the Black participants as Jews without questioning their maternal Jewish ancestry or if they had undergone a conversion. Some Black participants may have indeed been halachically Jewish, but a major emphasis was outreach to New York’s Israelite congregations.

Hatzaad Harishon had many successes: Some Black children received scholarships to Jewish schools, and older participants enrolled in Jewish seminaries. Some joined Ashkenazi congregations, some did formally convert, and some spent summers in Israel. Between 1966 and 1972, members even formed an Israeli dance troupe and published a newsletter. Both garnered national attention. Rabbi Block called it “time – and long overdue – to integrate Black Jews into activities of the mainstream American Jewish Community.”

Yet for all its success, the group was consistently plagued by internal disagreement, in particular over the definition of Jewishness. When it disbanded in 1972, those questions were still unresolved.

Today, they remain so, with countless media references to “Black Hebrew Israelites” focusing on the exotic and the extreme.

There is, in fact, no such thing as a Black Hebrew Israelite, or at least any one thing, and the phrase is not an accurate descriptor in an historical sense. As used today, the term is largely a conflation of many different groups that hold wildly different beliefs. Some have adopted rabbinic practices while others call white-skinned Jews imposters.

Many of the Black groups that Hatzaad Harishon focused on shared roots dating back to the African Americans’ emancipation from slavery. Upon freedom, some embraced Judaism as an alternative to Christianity, which many viewed as the religion of the slaveholders. Even before emanicipation, enslaved Black people resonated with the Exodus message of delivery from slavery over the New Testament’s promise of redemption in heaven.

That affinity for the Biblical Israelite story, however, did not make them automatically Jews. Because most adherents did not formally convert under Jewish law, the Black congregations remained apart from mainstream Judaism and grew more so as time progressed. Some individuals, including Black rabbis, who did wish to affiliate were met by blatant rejection, fueling a vicious cycle of mutual distrust.

By the 1960s, there was little interaction between them, even as the Black and Jewish alliance of the Civil Rights Movement was reaching its apex. In that dichotomous atmosphere, Hatzaad Harishon was born. Some of its activities are highlighted in this edited excerpt from the book, “Stepping Into Zion: Hatzaad Harishon, Black Jews, and the Remaking of Jewish Identity.”

Bruce D. Haynes is Professor of Sociology at the University of California. His most recent book is The Soul of Judaism: Jews of African Descent in America (New York University Press, 2018)

Forward Editor-at-Large Robin Washington contributed to this article. He will be speaking on “Hatzaad Harishon: A failed outreach effort – or was it?” in an online program presented by 92Y on Feb. 7 at 7 p.m. EST

Could Israelites be brought into mainstream Judaism? 50 years ago, one effort did just that