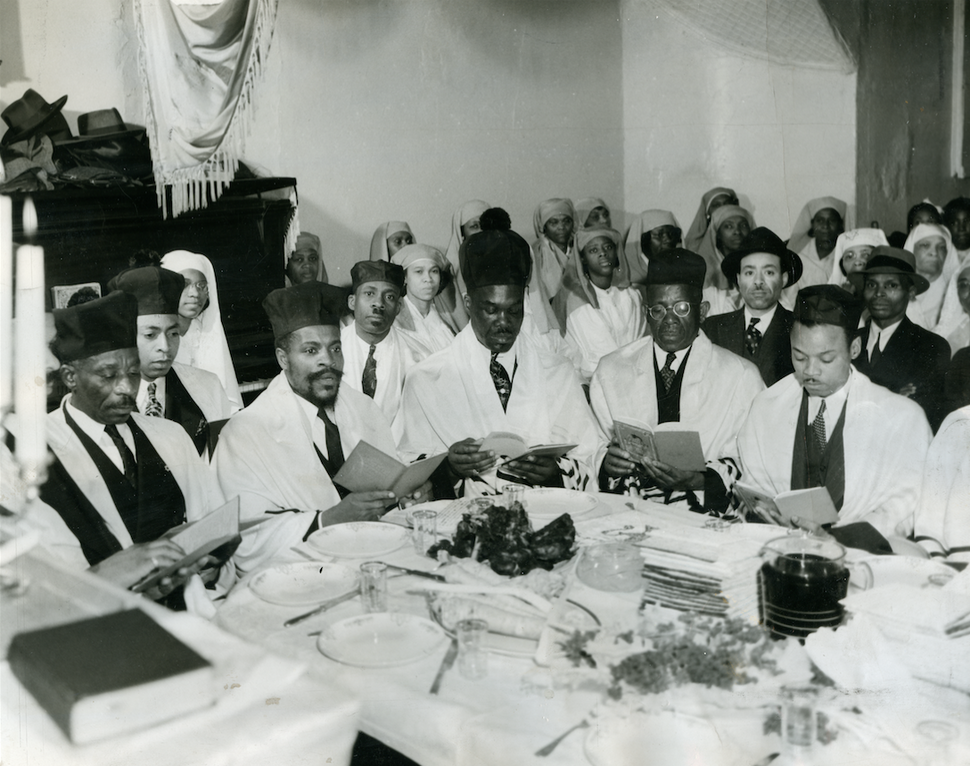 A Passover seder of the Commandment Keepers in the mid-20th century. Hatzaad Harishon reached out to similar Israelite groups in New York in the 1960s. Image by The Forward

This article is an edited excerpt from from Janice W. Fernheimer’s book, “Stepping Into Zion: Hatzaad Harishon, Black Jews, and the Remaking of Jewish Identity,” (University of Alabama Press 2014).

Hatzaad Harishon held its first event at the Brotherhood Synagogue in Greenwich village, with more than 50 people in attendance, just 10 days after the historic Civil Rights Act was passed in July 1964. After the initial meeting, the first joint social activity was an outing to Hava, a New Jersey kibbutz training farm where three busloads of people attended a tour of the farm and a lecture about kibbutz life.

In 1966 and 1967, Hatzaad Harishon collaborated with the Student Zionist Organization to create an integrated summer camp, Kvutza Gam Yachad. As one scholar wrote, “It became necessary to have both children and parents attend the camp to see how integration would work” and also to “lessen fears about the integration problem.” Hatzaad Harishon’s activities were family-oriented, though many were focused on the children themselves.

One of the most successful elements was Hatzaad Harishon’s youth dance troupe. They performed traditional Israeli folk dances and operated as an educational, fundraising, and public relations enterprise. They were so successful that they received numerous invitations to perform for various Jewish and mixed-race audiences, and in 1969 they appeared on national television on NBC.

They also performed at Hatzaad Harishon’s Benefit, an annual fundraising event that took place from 1967 to 1970. It featured well-known Jewish performers such as Shlomo Carlebach and Theodore Bikel, attracted large audiences, and raised significant funds for Hatzaad Harishon’s education and scholarship fund.

In many ways Hatzaad Harishon was both a reflection and enactment of the Zionist ideals of its white leadership. Along with Israeli dancing and performing, other Zionist activities were added to the group’s busy calendar: protests for Soviet Jewry, discussions of various aspects of Israeli society, study sessions with students from the Jewish Theological Society.

There were also panel discussions about Black Jewish identity, inter-dating (dating non-Jews), and mixers with other Zionist and mostly white Jewish youth groups. These activities provided a framework within which Hatzaad Harishon’s youths could interact with, learn more about, and be exposed to mainstream Jewish culture. They also paved the way for Hatzaad Harishon’s Black youths to become more accepted by mainstream Jews.

Hatzaad Harishon’s founding executive director was Yaakov Gladstone. A white Canadian Jew of Moroccan descent, Gladstone had been a Hebrew teacher in a Jewish day school when he came in contact with a Black child from Mount Horeb, an Israelite congregation in the Bronx. He volunteered to help the congregation’s cantor, Eliezer Brooks, teach the children Purim songs. He also worked with an Israeli dance instructor to enable several Black children to participate in the Annual Dance Festival of New York Hebrew Schools in May 1964 to celebrate Israel’s Independence Day.

Initially, Hatzaad Harishon struggled to receive recognition and financial support from the established Jewish community. It attempted to realize “klal Yisrael” and have its Black members become recognized members of the world Jewish community. To realize this goal, Hatzaad Harishon encouraged formal Jewish education, and assisted community members with the application processes for yeshivot, Talmud Torah, and Jewish day schools. They also helped to subsidize the costs with scholarships.

Since Jewish education was expensive and many of Hatzaad’s members did not have the financial means to undertake it, Hatzaad Harishon appealed to the New York Federation of Jewish Philanthropies for funding. Despite Hatzaad’s requests and numerous attempts to be recognized as a legitimate Jewish organization, the federation initially refused to give it the financial aid it needed. The federation initially refused to offer “recognition” and thus failed to acknowledge Hatzaad Harishon and the Black members they represented as legitimate, authentic Jews but in 1968 they did provide a $10,000 grant.

The group also took youths on trips to Israel, a generation before Birthright was born. Hatzaad Harishon members responded very positively to their experience. In the fall 1968 Hatzaad Harishon newsletter, Naomi Smith, a Black officer of the group, wrote:

“When I went to Israel, I felt like I was supposed to be there, this was the type of place where I belonged. I want my group to have the same Jewish experiences that I had. In the United States we know we’re Jewish and yet we always seem to be defending ourselves. In Israel the fact that one says he is Jewish is enough.”

From outside measures it would seem that 1969 was the beginning of what might or should have been Hatzaad Harishon’s road to long-term success. The federation finally acknowledged it as a legitimate Jewish organization in May 1968 by giving them a $10,000 grant. The youth dance group had performed at as many as 25 functions since their founding in 1964. The dance troupe had performed at Carnegie Hall for two years in a row and had received media coverage in the New York Times. Additionally, they had danced in Massachusetts, New Jersey, and all five New York boroughs the previous year. In January 1969 they appeared on NBC.

But the next month, the group’s longtime youth leader resigned. Within months of their return from the Israel trip, the youth group began to experience internal dissent. By January 1970, the dance troupe was completely defunct.

In 1971, a multitude of controversial events unfolded in both New York and Israel. Early in the year, Meir Kahane, the founder and first leader of the radical Jewish Defense League made disparaging remarks about Black Jewish communities. In March, the Israelite Board of Rabbis held a national conference to which Hatzaad Harishon was first invited and then later denied the chance to speak. In October 1971, several Black children were dismissed from New York yeshivot because their claims to Jewishness were deemed illegitimate.

In June 1971, Ben Ammi Carter, the founder of a different Hebrew Israelite group that had immigrated from Chicago to Dimona, Israel, visited Hatzaad Harishon, sparking deep controversy among its white and Black members.

Earlier than that, Yaakov Gladstone had resigned in 1970. He was replaced by a Black executive director, James Benjamin, who now had to deal with the disparate communities on the local, national and international levels.

For these and other reasons, Hatzaad Harishon had reached a breaking point.

Janice W. Fernheimer is the Zantker Charitable Foundation Professor and Director of Jewish Studies, Professor of Writing, Rhetoric, and Digital Studies, and James B. Beam Institute for Kentucky Spirits Faculty Fellow at the University of Kentucky. She is the author of “Stepping Into Zion: Hatzaad Harishon, Black Jews, and the Remaking of Jewish Identity