Gary Shteyngart on working in bed, writing from life and funding his pistachio addiction On one hand, it’s an indisputably funny book. (If you read it on the subway, prepare to freak out your neighbors by laughing loudly and often.) Set in the early days of the coronavirus pandemic, the novel follows several friends, different in their personalities and careers but united by their New York immigrant upbringings, who flee the city to quarantine at the same Hudson Valley country house. Fortunate enough to stay home and spend money while coronavirus rages outside, they indulge in enough cocktail-shaking, hobby-cultivating and grocery-hoarding to fuel a dozen 2020 trend pieces. The indulger-in-chief is their host, Sasha Senderovsky, a Soviet-Jewish author of “stupid comic novels” successful enough to earn him a lot of literary frenemies but not to (quite) cover the upkeep of his second home. If these biographical details don’t sound familiar to you, check out Shteyngart’s Wikipedia page — the novel, which makes Senderovsky the butt of every joke, can be read as a prolonged roast of its author.

But not all the jokes come at Shteyngart’s expense. Even more than the follies of the work-from-home class, the novel lampoons the idea of America as a problem-solving, adversity-overcoming power equal to any challenge. Senderovsky’s family may have immigrated in pursuit of the mythical American Dream, but the pandemic exposes their adopted country for what it is: another failing superpower.

When I interviewed him via Zoom, Shteyngart told me that his Soviet heritage prepared him to weather the pandemic — and to write this book. “In the Soviet Union, you try to find happiness around your kitchen table, with the people you trust to talk freely with,” he said. “And that’s what this book is about. It’s about eight people trying to find some kind of happiness while everything else burns to hell.”

I reached Shteyngart at his apartment in New York to talk about his writing routine, his favorite upstate haunts and the reasons for writing in pessimistic times. 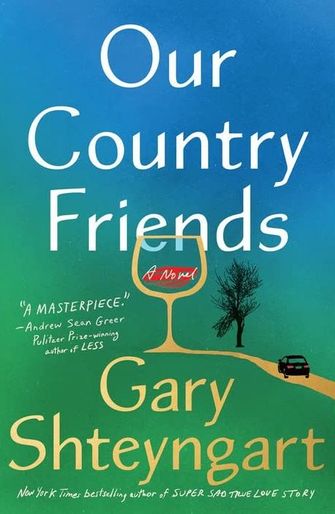 I try to do long walks throughout the day. They really help the writing process, because that’s when you start to think a lot about what’s going to happen next. I take long swims when I’m upstate, and I keep my phone near the pool in case I need to type up ideas I have underwater.

Why he writes in bed:

You’re loosened up. It doesn’t feel like work; it feels like you’re doing the same stuff you’d be doing if you weren’t writing. It’s something I can do well into my 70s, when my back gives out — which it probably will because I always read in bed.

They’re doing amazing things with pistachios. They’re brined in pickle juice, dill and garlic. For the afternoon, that’s really nice. They’re very expensive, that’s why I have to write a lot.

On writing close to life:

I tried to just make sure it’s not even a 50% concordance with one individual. And that makes it more interesting. I keep in mind the fact that I don’t want to insult anyone. But also, my fiction’s gotten a little gentler the past few years, so no one’s getting shivved in the shower the way I used to.

And making fun of himself:

If I’m going to make fun of comfortable people who live in the country and, you know, go to a specific restaurant because it has great hand sanitizer, I better make myself even more the rump of the jokes than anyone else around me.

On the Russian summer camp that inspired the book:

It was a Russian bungalow colony in Ellenville, New York, a much less manicured part of the state. Everyone spoke Russian, and parents only came on the weekend. We had these very indulgent grandmas who let us get away with murder. It was the best part of my year, no doubt. Then I’d go back to Solomon Schechter and get teased for nine months by people who didn’t like my accent, or my big fur hat straight out of Leningrad. That’s maybe why, just like Sasha, I have such a love for the countryside.

What he reads while working:

I read whatever is germane to what I’m doing. Because I was writing about the country, I was reading a lot of Chekhov. Some of his best stories are set in the country. “Lake Success” was terrible, because I had to read all these books about finance. They’re just dreadful. A couple are well-written, but so many are just soulless people writing about their soulless activity.

On writing the first pandemic novel:

Gary Shteyngart on working in bed, writing from life and funding his pistachio addiction