Woody Allen’s latest is playing in a New York theater — but is anybody going to see it? Anybody? 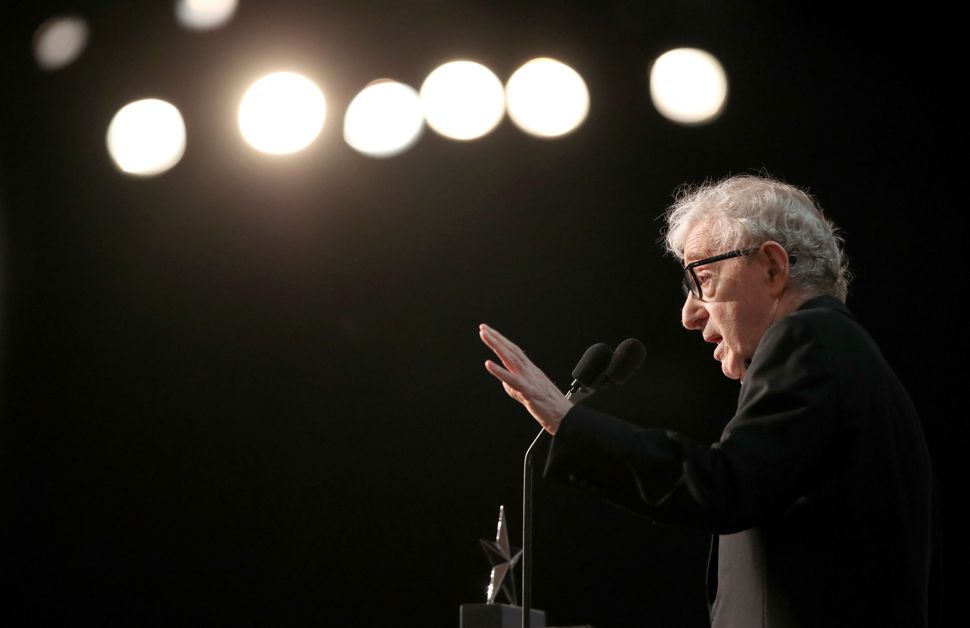 On Tuesday I opted to spend a gorgeous afternoon in New York City going to a movie. The movie was “Rifkin’s Festival,” Woody Allen’s latest and a film that presently has a 42% on Rotten Tomatoes with a 50% audience score.

Given this tepid reception, I wondered who was going to see Allen’s film, which is available on streaming services, in the middle of a pandemic. The film only grossed $24,000 on the Friday and Saturday it opened for a limited release in the United States last month (it made a little over $2 million internationally and opened in theaters in Europe in 2020). But some people were seeing it in person, either as an act of public defiance, boredom or genuine interest likely undertaken by people who remember the era of the auteur’s excellence.

I used to see all of Allen’s movies on the Upper West Side at the Lincoln Plaza Theater, which closed in 2018. The Quad in the West Village was the only place playing the new one. It made $1,600 there its opening weekend per the New York Post; a general admission ticket goes for $16, seniors $13 and they were showing it four times a day. The Quad is on the same block as the 13th Street Rep, which for a gazillion years played “Line” by Israel Horovitz, who, like Allen, was a New York Jewish writer accused of sexual misconduct. (Also like Allen, he has a son who believes the allegations – although Horovitz’s is a Beastie Boy and Allen’s is just a Pulitzer Prize-winning journalist named Ronan something.)

“Are there a lot of people seeing this?” I asked the guy at the box office, after I ordered one for the 3:10 show and flashed my Excelsior Pass. “Yeah, actually,” he said.

I had a bit of time to wait in the lobby, probably my favorite lobby of any arthouse theater in Manhattan because of its cozy leather chairs.

People who looked to be of retirement age and older started trickling in. A group of women were there to see “Belfast,” just nominated for seven Oscars. So was a gentleman I chatted with for a while. He had no idea Allen had another movie out. “Belfast,” Kenneth Branagh’s semi-autobiographical film about his childhood during The Troubles, was playing opposite a documentary called “Breaking Bread,” about Arab and Jewish chefs in Haifa.

The 12 or so other folks – apparently all there to see “Belfast” – filed into their 3:00 p.m. screening and I heard a woman in a pink mask grab a ticket for “the Woody Allen.”

Patricia Beckert, 82, had come from the Upper West Side, inspired by the Oscar nominations earlier in the day to make a trip to the movies. She hadn’t seen Allen’s recent films (“they weren’t terribly well reviewed”) but said she would watch classics like “Annie Hall” again and again.

I asked her if she felt conflicted at all, given the allegations against Allen.

“I went through this whole thing about how much do you hold the artist responsible,” said Beckert. “But then I figured, we’re in a pandemic.”

A pandemic needs some guilty pleasures. When I told Beckert that, “embarrassingly,” I was seeing the new “Jackass” film later that day in her neighborhood, she said “in these times we just realize ‘whatever’ and it’s OK.”

When we were told our theater was ready, Beckert and I were the only audience members. Before trailers, the speakers played “Soliloquy,” the Act I finale of “Carousel,” a nearly 8-minute-long ballad in which a wifebeater realizes that if he has a daughter he needs to be responsible.

The trailers were an interesting mix. A teaser for the new season of “Picard,” which – trigger – featured Whoopi Goldberg. A movie about brothers whose dad died and had no actor I recognized. Unless that’s Norbert Leo Butz. Oh, it was. A “rediscovered” French classic called “Five Day Lover.” Some Cannes film about a sensitive redhead guy with a cat. And a film set in Bethlehem in which a Palestinian woman somehow ends up recruiting people – or maybe being recruited – by Israelis, I think (Screendaily said it had “ticking clock peril”). 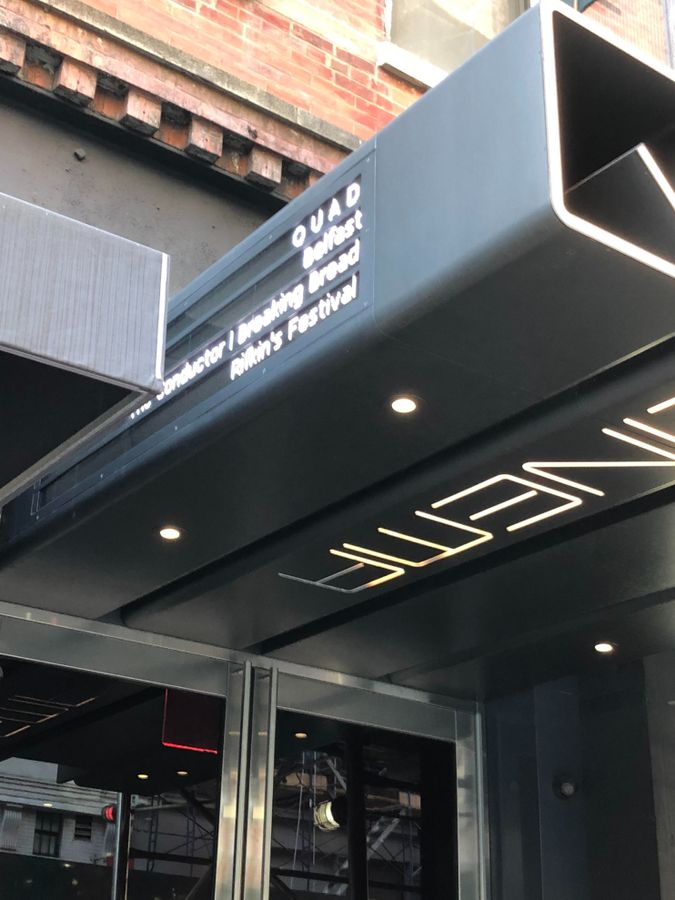 As the film started, a woman in a puffer coat walked in and sat in the third row and, a couple minutes in, an older Haredi man took a seat across the aisle from her, and took some time to settle. He twirled his peyos and adjusted his glasses.

Immediately I remembered “Rifkin’s Festival” – about a pretentious 70-something writer who goes to a film festival with his publicist wife, who begins an affair with a handsome young director (and who, in turn, begins courting a gorgeous, married and much younger doctor) – is quite bad.

I had previously given it a lukewarm review, citing Allen’s recreations of classic films as a highlight and largely overlooking the wooden performances and creaky dialogue that I’ve come to expect from his late period. (I’ve held this view at least since that line in “Blue Jasmine” where a character said something like “I love your beach house” during an establishing shot of a beach house.) And honestly I was embarrassed to have been so diplomatic.

The diplomacy was the result of a few things. One, I was genuinely surprised that Allen did something at least a little different with his recent formula this time, and I was probably relieved that there was something more to it. Another factor was the inevitable accusations of bias (I’m featured in a documentary series that basically insists that he is a pedophile) and slamming the film for reasons that had nothing to do with art qua art. 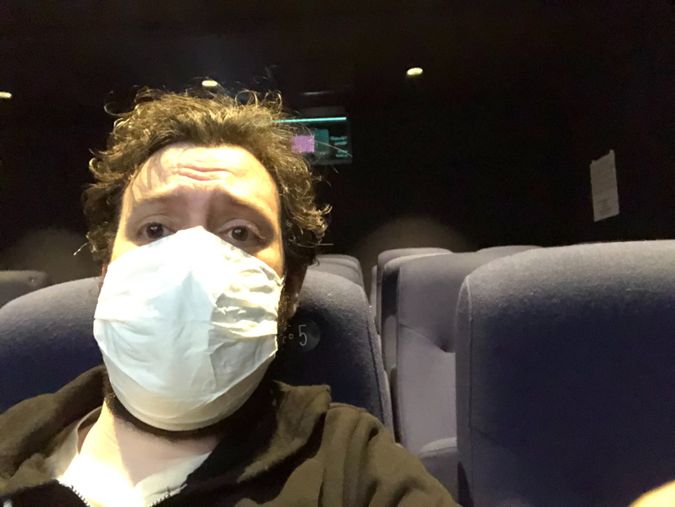 The author in a row by himself. Photo by PJ Grisar

But I really shouldn’t have graded it on a curve. The performances are embarrassing, not just from the European bit players, who were probably cast in the film just for being attractive and in San Sebastian, but from Wallace Shawn, Gina Gershon and everyone but (shockingly) Steve Guttenberg. The dialogue seems slightly better than the delivery, but the delivery is abysmal, having something like the cadence of a cold table read with non-native English speakers. Somehow the characters sound like they would never say the words they’re saying. Whether this is overdirecting to get to something so specifically off or a resistance to get it even a little bit right isn’t clear, though Allen is famous for doing as few takes as possible and not giving his actors much in the way of guidance.

What makes it all the more maddening is how the film, through aspiring great novelist and cinema snob Mort Rifkin (Wallace Shawn), rails against the sort of popular movies that have an exceedingly better grasp of how people speak and function. Knives are out for Frank Capra, Billy Wilder and John Ford, all of whom directed films as if they came from the planet Earth and were born into human families. They are set at odds with Fellini, Bergman, Truffaut and Godard. While aping the aspect ratio and cinematography of these European directors, Allen comes nowhere near them, and seems sad for trying. Yes, I know, it’s a comedy, but I didn’t hear anyone laughing or even tittering or sighing contentedly at one of Mort’s cheap bon mots. I might have, wryly, when director Phillipe (Louis Garrel) said, “I’m a director I understand human psychology.” But it’s not for the reason Allen wanted me to.

This time around, I was also bothered by the ending, where it does seem that Mort’s love interest, Dr. Jo Rojas (Elena Anaya), is sad to see him leave. But then, of course she is! These two had vague existential conversations, discussed the oh-so-secret corners of New York (the obscure boat landings at Central Park) and, in a moment of completely superfluous dialogue, discussed how they love chocolate and bread – and particularly bread WITH chocolate.

It’s hard to stomach, even without a line that echoes Allen’s famous apologia regarding his affair with his now-wife Soon-Yi Previn. In explaining Jo’s attraction to her philandering, emotionally abusive husband, a character says relationships are irrational and “the heart has its reasons.”

What were Allen’s reasons for making this film, beyond an easy, gorgeous, readymade locale and a way for him to assert his artistic influences while wanly sending them up? I won’t pretend to know.

As the credits rolled – a few minutes after the Haredi gentleman had excused himself during a parody of “The Seventh Seal” – I asked Patricia Beckert what she thought. She seemed to think, as Mort Rifkin did about Phillipe’s film, that it was derivative and that Allen had nothing new to say.

It was like a “college skit,” she told me. When I asked if she was at least won over by Mort’s dreams of classic films, she said they paled in comparison to the parodies on Sid Caesar’s “Your Show of Shows.” (Allen wrote for Caesar after that show ended, but he can do parody better too – see “Love and Death.”)

I found myself agreeing with her assessment and wondering if it is one shared by most who venture out to see this career lowlight. The critical consensus is established; the review the Quad chose to highlight on its website is from The Hollywood Reporter, calling “Rifkin’s Festival” a “rather likeable overseas rom-com served with a dose of melancholia and several large portions of cinematic nostalgia.”

At least 50% of the Rotten Tomatoes audience may defend the film as the work of an unqualified genius, as one French person appeared to in a broadside of my review (he called it “an article to vomit”) sent to my inbox. It’s also, bizarrely, something of an inadvertent innovation for Allen; an NFT-type endeavor chose the film to be highlighted as a “metaverse” experience wherein investors can attend a virtual premiere as a unique avatar called a “Rifkiner.” But on Wednesday afternoon, the audience didn’t appear electrified by what Allen had to offer. Meanwhile, my friend who saw “Belfast” loved it.

With Beckert’s blessing, I then went to see “Jackass Forever,” a film that opens with a penis kaiju monster and concludes with men chugging milk, being spun on a high velocity merry-go-round till they vomit and getting sniped by paintballs. It was inventive, fresh and nostalgic all at once.

Mort Rifkin and Woody Allen would have almost certainly hated it – I loved every minute.

Woody Allen’s latest is playing in a New York theater — but is anybody going to see it? Anybody?