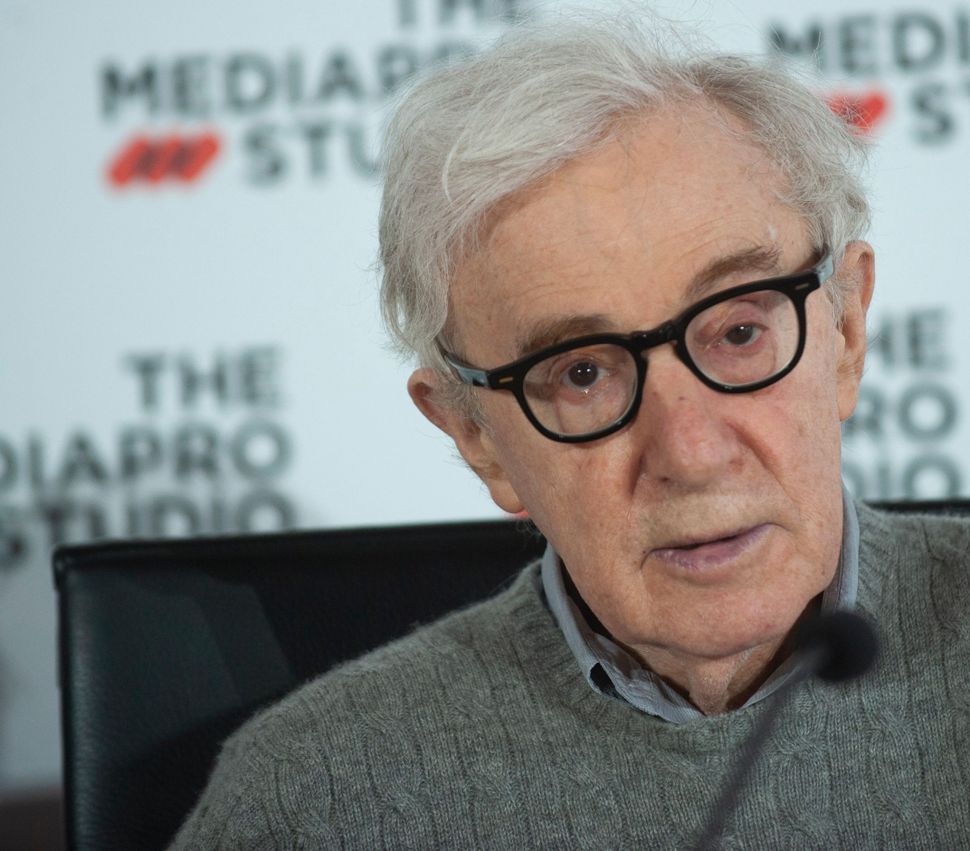 Apropos of Nothing: Autobiography
By Woody Allen
Arcade Publishing, 400 pages, $40

Let’s get it out of the way: Here’s a list of terms Woody Allen uses to refer to women in the first chapter of his new memoir, “Apropos of Nothing.”

His mother, one of five sisters: “arguably the homeliest of the swarm.” His aunt on his father’s side: “a circus pinhead.” His teachers: “obnoxious picklepuss,” “fatso,” “sterile drones.” His adolescent crushes: “delectable bohemian little kumquats.” The broads he saw in the movies: “a stacked tomato” (what?), “some leggy tootsie,” “cheap, sexy blondes.”

I would go on, except that this objectively outrageous language seems to be exactly what Woody Allen wants me to point out about the book. It’s a powerful work of self-mythology, devoted to constructing a moral framework that exalts Allen as a rebel whose refusal to abide by social norms makes him not only special, but a reliable conveyor of truth. According to the logic of the book, if I point out that the words he uses to describe women are offensive, I’m proving his point. In a world full of dross, laughable rules that only obscure the messy facts of humanity, I’m just another sterile drone, enforcing useless standards and refusing to see the world as it is.

And by that logic, he remains untouched, a lone and brave paragon of the honest and unpleasant. When Arcade Publishing, an imprint of Skyhorse Publishing, announced that it had acquired the book and was releasing it immediately — after Hachette, the initial publisher, dropped it following protests — they framed their choice as one of moral rectitude. “In this strange time, when truth is too often dismissed as ‘fake news,’ we as publishers prefer to give voice to a respected artist, rather than bow to those determined to silence him,” Arcade editor Jeannette Seaver said in a statement to the Associated Press. From writer and publisher alike, the choice to position Allen as the oppressed avatar of a moral minority is a crafty trick. It negates in advance any attempt at criticism, on any grounds, as unethical and false.

Given that framing, it’s no surprise that “Apropos of Nothing” is a deceitful book, one that asserts honesty while evading truth. An easy example: Allen mentions, at various points, meeting both Bill Cosby and Roman Polanski, both serious sex offenders. But he does so merely in context of meeting respected artists, people whose acquaintance reflects well on his own status in the entertainment industry. It’s as if their well-documented, painstakingly proven crimes — Cosby was convicted and Polanski pled guilty — simply never existed. There’s honesty — he’s given us no reason to believe he cares more about their misdeeds than he lets on — but no truth.

Yet the memoir does in fact serve a purpose. Allen has been gradually sidelined as the public has come to take more seriously his adopted daughter Dylan Farrow’s accusations that he molested her in 1992, when she was seven years old, accusations Allen has always maintained are false. His movies have been shelved; his stars have disavowed him. And while Allen may see this book as a brave stand against an undeserved backlash, what he really does in it is make clear how very, very badly he wants us to laugh at him again.

It’s a discomfiting look inside the mind of someone determined to win his way into forgiveness yet entirely unwilling to try to make amends, or even look closely at the reasons why so many think he ought to. In trying to paint a cohesive picture of himself, Allen instead paints a striking divide. He oscillates between the character of righteous, lonely rebel and that of darling, piteous schlemiel, and it’s dreadfully clear that he can’t discern the difference between the two.

Stories he tells as cowboy tales come across as deeply, unconsciously sad. When he narrates stealing out of a restaurant with his then-girlfriend and future wife Louise Lasser to have sex in an alleyway, he ends the anecdote by describing a flat post-coital vision of her across a table, “cheeks rubicund with fulfillment.” His conclusion from the episode? “Women like that do not grow on trees.” He’s imagining himself as devil-may-care provocateur, re-buckling his belt in shocking contentment. But we see a man who is patently desperate to have the old jokes work again; to have everyone agree with him that it’s funny and good to talk about women that way; to win our blessing to be fundamentally disinterested in what’s really going on inside his audience — Louise, and us — across the table.

That passage, which arrives midway through the book, was the last I read at the end of a long day. When I looked up from it, I suddenly and unexpectedly began to cry. I had been trying to work my head around the decision to release this book at the start of a week that ended with one-third of the world under lockdown. Even before I began to read it, the choice to abruptly re-introduce Allen’s memoir in the middle of a pandemic felt crass, a look-at-me gesture that couldn’t be more cynically timed. As it turns out, that gesture was an alarmingly apt extension of the central problem with “Apropos of Nothing,” which is that in the internal universe Allen attempts to describe, other people just don’t really matter.

He’s the sole star of his own sympathies, describing his friends, family and enemies exclusively by how their actions and feelings impact him, and never trying to understand or empathize with them. Lasser, he repeatedly asserts, had serious mental health issues while they were together, but he never once indicates any interest in what her experience of them was; he’s strictly concerned with how her resulting behavior impacted him. Alarmed by Mia Farrow’s suggestion that they get married, which in his account arrives shortly after they begin dating, he writes that the offer “should have clued me in that I was dealing with a more complicated person than just this fragile, beautiful supermom.” He says the offer was a red flag; he doesn’t seem to consider whether his remarkably two-dimensional impression of her was one, too.

You could say that Allen is upfront about what he perceives to be his flaws. He does go on at length about what he deems his short attention span, intellectual ineptitude and general neuroticism. But he’s unwilling to interrogate how those flaws impacted the people he comes close to, beyond repeatedly noting his regret that he couldn’t offer women a slightly more attractive personality to fall in love with. While he sometimes skates close to identifying more serious concerns about his behavior, he always turns away from them. Most troublingly, in nearly every interpersonal relationship he describes himself as almost strictly reactive, a passive party who bears little responsibility for how things progress. (The exception is his description of his first marriage, to Harlene Rosen, in which he’s relatively frank about his failings.)

In one of the book’s most distressing passages, he addresses the accusation that he is drawn to inappropriately young women. (His response to Dylan Farrow’s accusations comes later.) Describing his relationship with the actress Stacey Nelkin, who was 17 at the time — he was nearing 40 — he paints a picture in which she effectively pursued him, and he, rather dopily, went along with it. Ditto for Mariel Hemingway, his 16-year-old co-star in “Manhattan,” who in her 2015 memoir wrote that Allen pursued her once she turned 18; he invited her on a trip to Paris, a move she felt was clearly sexually motivated. Allen expresses bafflement at that suggestion, saying that she had invited him to visit her family in Idaho — which he did — so it only made sense for him to invite her to Paris, alone. It’s as if he’s trying to prove to her that her discomfort is factually impossible, and morally inexcusable; after all, she was nice to him first. You can imagine how much more this attitude of passive, schmucky victimhood comes out when he addresses Dylan Farrow’s accusations. He frames the ensuing ordeal, excruciating for everyone involved, as a battle between himself and Mia Farrow. The obvious idea that he might have contributed in any way to inflicting psychological and emotional pain on his children in the process — leaving aside the ultimately unprovable question of whether Dylan Farrow’s allegations are true — never crosses the page.

I looked back at what Allen wrote about Lasser: “Women like that do not grow on trees.” I tried to imagine how someone who would describe a woman he loved like that could possibly be seen as a unusually astute reporter of human character. I tried to understand the mental contortions it would take to uphold his attitude of untouchable, isolated right-ness, particularly at this moment, as not only valuable, but good. I tried to find critical distance; I did, I swear. But as Allen and his publishers would claim, truth is truth. And the truth is: I simply couldn’t bear the void of it.