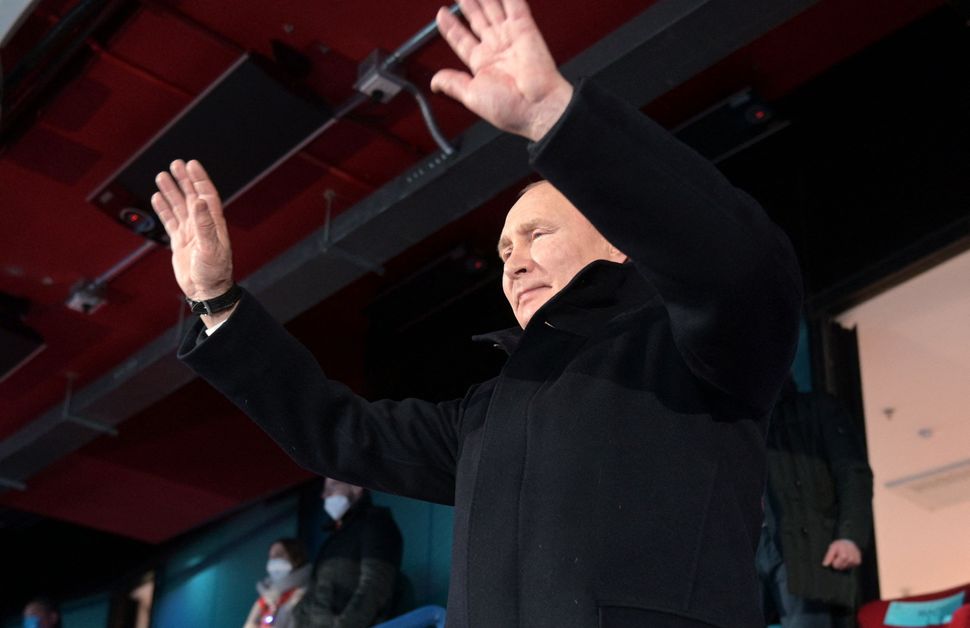 Vladimir Putin at the Olympics By gettyimages

The word “legitimate” is suddenly hot — and it’s being increasingly used to justify the unjustifiable. In the recent rare and unified front of Republicans and Democrats, rushing to sanction Russia as it begins an invasion of Ukraine, it may be convenient to stop thinking about the Republican National Committee’s statement that the Jan. 6 attack on the Capitol was “legitimate political discourse.”

That’s the kind of language choice that appeals to Vladimir Putin, who recently gave an hourlong televised speech that rewrote history and redefined legitimacy. The speech made Putin’s views on the Ukraine clear. But it also did much more.

“What he’s saying is something far wider: Ukraine is not a legitimate state. Ukraine is Russia. It should never have existed as anything else,” David Patrikarakos, a contributing writer at Politico Europe and the author of “War in 140 Characters: How Social Media is Reshaping Conflict in 21st Century,” told Time.

Now, China is chiming in with that same “legitimate” framing, this time with regard to Russia’s behavior toward Ukraine.

“China did not explicitly endorse Moscow’s latest moves toward Ukraine but still recognized Tuesday what it called Russia’s legitimate security concerns, in Beijing’s latest tightrope act over the crisis in Eastern Europe,” Lily Kuo wrote in The Washington Post.

Let’s take a moment to consider what “legitimate” means.

The first known use of the word “legitimate” was in the 15th century. It meant, according to the Merriam-Webster Dictionary, “accordant with law or with established legal forms and requirements.”

In fact, “legitimate” is rooted in the Latin word for law.

“Legitimate” has been in the news as an adjective, but it’s possible to use “legitimate” as a verb, too.

Let’s focus on “make” and all its sordid possibilities.

Language can easily be deployed to make the unacceptable acceptable. In his famous essay “Politics and the English Language,” George Orwell warns about the dangers of “meaningless words” and — wait for it — words with “variable” meanings.

“In our time, political speech and writing are largely the defense of the indefensible,” Orwell wrote in that April 1946 essay, which increasingly feels like it was written this week.

“Political language,” Orwell added, “is designed to make lies sound truthful and murder respectable, and to give an appearance of solidity to pure wind.”

Scholars have been on alert to the potential misuse of this word and have responded to the “legitimacy” campaign by considering whether any law justifies Putin’s actions.

Dr. Björn Alexander Düben, who teaches Conflict and Security Studies at King’s College London, wrote a post explicitly titled “The Legitimacy of Russia’s Actions in Ukraine” for the London School of Economics blog. Duben was commenting on Putin’s 2014 moves — but his remarks are even more relevant now, with an estimated 190,000 Russian troops ready to pounce on Ukraine.

“The Russian government has consistently defended its startling moves in Ukraine, denying all accusations that its encroachments on the country’s sovereignty have been illegitimate. Does it have any valid grounds for doing so?” Duben wrote.

“From a legal perspective, the answer is clear: Having forcibly occupied parts of a sovereign country’s territory, having formally annexed the occupied territory, and having flooded another part of the country with heavy weaponry and irregular combatants (‘volunteers’ who were permitted to cross the border in large numbers, as well as regular soldiers), Moscow has acted in violation of some of the most basic principles of international law.”

But let’s think beyond the law, for a moment.

“Legitimate” has other meanings besides “legal” that have become more popular since the 15th century and possibly most relevant to us right now.

I’ve been rereading Definition 2a in the Merriam-Webster Dictionary in recent days — “being exactly as intended or presented: neither spurious nor false.”

Putin is trying hard to frame his claims as not false, which is not surprising for a former KGB agent. The problem is that we’re in an era where the false is presented as true.

This morning, former Secretary of State Madeline Albright wrote an Op-Ed in The New York Times titled “Putin Is Making a Historic Mistake.”
Putin, she wrote, is “sure that Americans mirror both his cynicism and his lust for power and that in a world where everyone lies, he is under no obligation to tell the truth.”

Exactly. Our growing acceptance of lies has not gone unnoticed. Let’s hope this unified front of Republicans, Democrats, and NATO also moves to protect the greatest battleground — the truth.

Aviya Kushner is The Forward’s language columnist and the author of “Wolf Lamb Bomb” (Orison Books) and “The Grammar of God” (Spiegel & Grau). Follow her on Twitter @AviyaKushner