What to watch, listen and read to understand the war in Ukraine 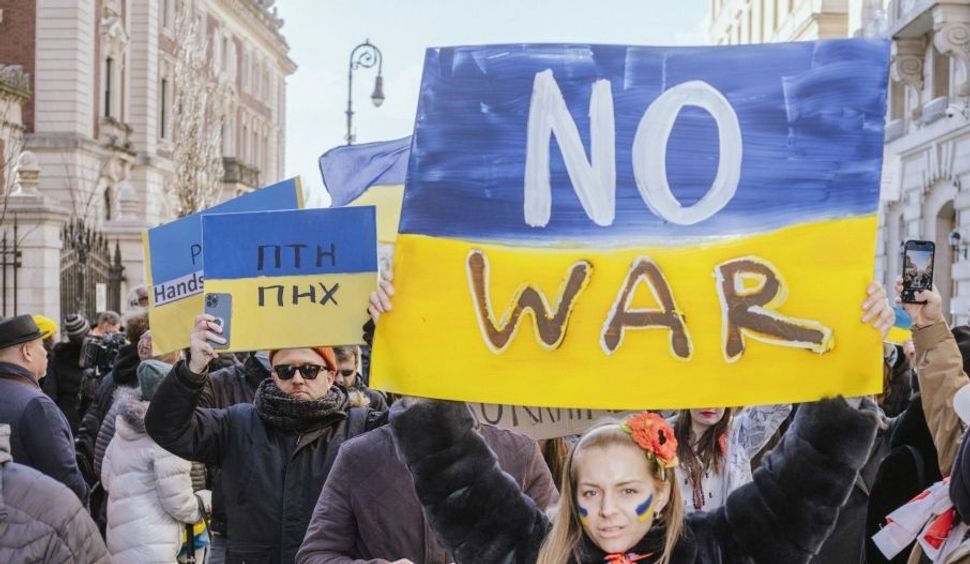 Protestors outside the Russian embassy in New York city on Februrary 27, 2022. Image by Getty Images

Russia’s invasion of Ukraine, which began February 24, is the largest military action in Europe since WWII. Yet it can be difficult to parse breaking news without an understanding of the history behind it.

If you’re looking to deepen your understanding of the situation on the ground, this round-up of things to read, watch and listen to will help. Included are a podcast on what sanctions can (and can’t) accomplish; historical explainers on Ukrainian history from Roman times to the present; and novels that show what life is like for eastern Ukrainians who have been living through fighting and occupation since 2014.

However much or little you know about Ukraine and Russia, there’s something here to help you learn about the region and its people.

From The New York Times’s “The Ezra Klein Show:” Can the West stop Russia by strangling its economy?

What can sanctions accomplish, and what are their limitations? How does Europe’s dependence on Russian fuels shape its economic response? On this episode of the New York Times podcast, economic historian Adam Tooze talks us through exactly what it means to sanction Russia, and the economic landscape that might emerge as a result.

From Vox’s “Today Explained:” The real and imagined history of Ukraine

On this episode of Vox’s daily podcast, historian Timothy Snyder (he’s going to come up a lot in this article) unpacks Russian president Vladimir Putin’s claim that Ukraine was established at the creation of the Soviet Union, and as such isn’t really its own country. Ukraine, Snyder argues, was “was already there, and it already had an extremely interesting history.”

From The New York Times’s “The Daily:” In Ukraine, the men who must stay and fight

“The Daily” excels when it simply lets people speak about their reality. This is one of those episodes. Times journalists follow three Ukrainian men who talk about everything from enlisting in informal civilian defense forces, attempting to escape Ukraine altogether, and wrestling with the notion of Russian soldiers as “enemies.” A thoughtful and harrowing listen.

This 2015 documentary, streaming on Netflix, chronicles the Euromaidan protests in 2013 and 2014, which resulted in the ousting of pro-Russian president Viktor Yanukovych. Much of the film consists of first-hand footage gathered by Jewish filmmaker Evgeny Afineevsky, who attended and documented the protests. “Winter on Fire” is a direct and energetic look at the movement that shaped Ukraine’s current political situation, although some critics have chastised Afineevsky for downplaying the presence of neo-Nazi groups at the protests.

This week, the Babyn Yar site was struck by Russian bombs. Loznitsa’s documentary is composed entirely of archival materials showing the Nazi invasion of Lviv and Kiev (where some Ukrainians greeted officers with flowers and salutes) and the eventual Soviet recapture of the cities. Playing at Film Forum in April, the film does what the title suggests, showing the viewer the events that led to the 1941 massacre at the titular ravine. But Loznitsa, who wrote spare title cards to thread the film, photos and documents he edited together, lets the images — and later testimony — speak for themselves.

A big (and a bigger) take on Ukrainian history: “Bloodlands” by Timothy Snyder and “The Gates of Europe” by Serhii Plokhy

“Bloodlands” is historian Snyder’s account of the unceasing carnage that took place in the territories between Germany and Russia before and during WWII. (Can’t read the whole book? Watch an interview with Snyder here.) Many of these territories, including Ukraine, were occupied by Nazi and Stalinist forces at various points, and their people suffered under both regimes. Particularly germane is a chapter on the “Holodomor,” a Soviet-imposed famine that killed millions of Ukrainians from 1932-1933. It’s a difficult and astonishing read.

To zoom out even further, turn to Plokhy’s “The Gates of Europe.” Exploring how Ukraine has been exploited by different empires since the time of the Romans, this tome takes in about 2,000 years of Ukrainian history. But it was published in 2017, which means Plokhy wrote with an awareness of the Russian occupation of Crimea and incursions into Eastern Ukraine.

A portrait of totalitarianism’s human toll in Russia: “The Future is History” by Masha Gessen

In this affecting, humane history, Gessen follows several Russians born in the 1980s, when the Soviet Union was crumbling and a new era of democracy in the region seemed possible. Gessen’s subjects recall their childhoods in an era of new hope and dangerous chaos. They also illustrate how Putin’s increasingly repressive grip on Russian society has affected their own lives. The result is a political and personal tragedy: As Gessen, a New Yorker journalist, puts it, the book’s protagonists tell “what it was to grow up in a country that was opening up and to come of age in a society shutting down.”

An oral history of nuclear disaster: “Voices of Chernobyl” by Svetlana Alexievich

Alexievich, a Nobel Prize laureate in literature, is famous for her book-length oral histories, especially this one about the Chernobyl disaster that occurred on the border of Belarus and Ukraine in 1986. The HBO series “Chernobyl” is based on Alexievich’s interviews with hundreds of locals, scientists, and government officials — but the book is much more gripping than any TV show. With Russian forces currently in control of the Chernobyl plant, this is a fascinating deep dive on the region’s history.

Everyone is confused about exactly how Volodymyr Zelenskyy went from playing the president on Ukrainian TV to a landslide win in the actual election. This 2019 New York Review of Books piece by Sophie Pinkham gives a thoughtful overview of Zelenskyy’s rise and the political circumstances that made it possible. Pinkham, a scholar of Russian and Ukrainian culture, has also published a memoir about traveling in the region, which you can find here.

Fiction and poetry from Ukrainian writers:

Hailed by critics as the “unofficial bard of eastern Ukraine,” Zhadan (also the frontman in a ska band) writes novels that take place in regions that have been subject to Russian incursion since 2014. “Voroshilovgrad” gets its title from the Soviet-era name of Luhansk, currently the capital of a pro-Russian separatist state. In the book, one man’s journey to take over his brother’s gas station gives the reader an intimate perspective on the devastated landscape of war-torn Ukraine.

In a collection of stories released this week, Belorusets focuses on the implications of war in eastern Ukraine for ordinary women: a florist, a cosmetologist, even a witch. Interspersing her prose with photos, Belorusets brings a fabulist lens to a very real conflict.

Chekh, a rising star in Ukrainian literature, based “Absolute Zero” on his own military experience fighting in eastern Ukraine. First published in 2017, this novel received several literary prizes in Ukraine before being translated into English in 2020. Its arrival couldn’t be more timely.

What to watch, listen and read to understand the war in Ukraine