Babyn Yar, Putin’s war in Ukraine, and the paintings my grandfather never got to see exhibited 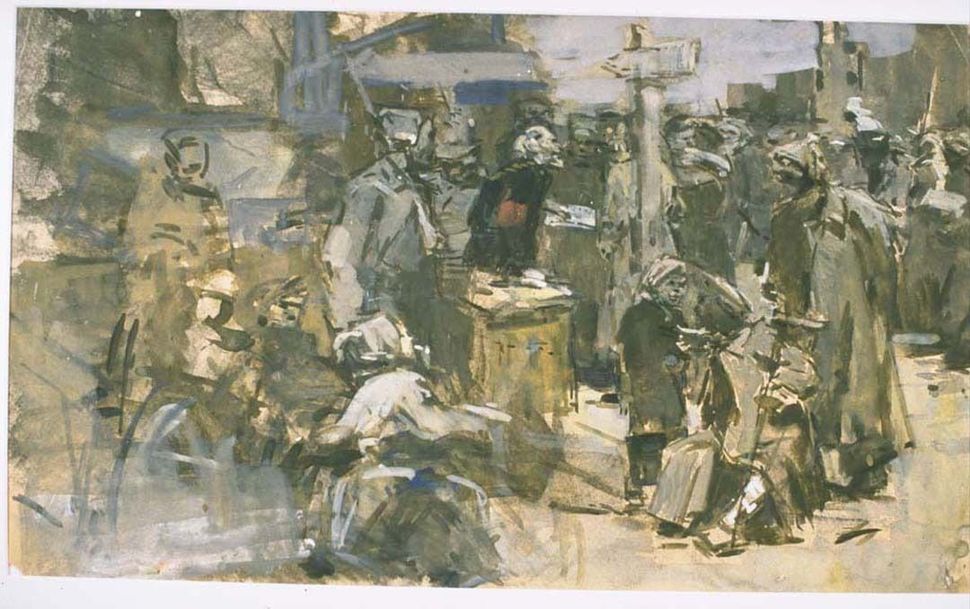 When Russian bombs fell on the Babyn Yar Holocaust Memorial in Kyiv the other day, killing more people on top of the tens of thousands slaughtered there by the Nazis, it was an especially painful moment for me.

I had been invited to have my grandfather’s paintings – the first artistic renditions of the massacre – tour Ukraine as part of the country’s growing effort to come to terms with its history. My grandfather, Felix Lembersky, grew up in Ukraine and lost his parents, along with countless other Jews, in the execution fields of the Nazis. After the war, he was never allowed to exhibit those paintings in the Soviet Union; the Holocaust was not to be discussed there. He died never seeing the works on display.

Growing up in Leningrad in the 1970s, I remember guests coming to our home to see the Babyn Yar paintings. When my mother took these artworks out of a closet and brought them to our living room, visitors stood up, as people do when reading Kaddish. Planning the exhibition in Kyiv, I felt that justice was finally being restored to all whom my grandfather showed in his paintings and to those who mourned in silence. 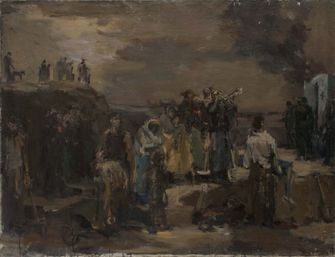 *Babyn Yar:** The artist Felix Lembersky grew up in Ukraine and lost his parents, along with countless other Jews, in the execution fields of the Nazis. Image by Felix Lembersky

I was inspired to speak with the young people on the Babyn Yar Holocaust Memorial team in Kyiv. They were in their late twenties, ethnic Ukrainians and Jews, born and raised in independent Ukraine, and working together to preserve the memory of the Holocaust. They told me that facing the Holocaust was fundamental to Ukraine and its democracy, essential for the country’s future.

The Ukrainian government, led by Volodymyr Zelenskyy, supported the plans for the exhibition and many other projects to preserve the memory of Holocaust. Now all plans are on hold. The Ukrainians are defending their country against Putin who shamelessly claims to be fighting Nazis to drum up support for his despicable war, all the while dropping bombs on Ukraine, as the Nazis did eighty years ago. 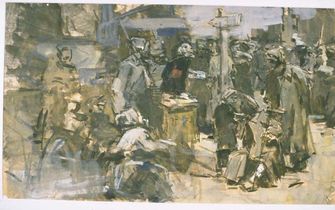 I grew up in Russia and spent summers in Odessa, a Ukrainian city that had a large Jewish community in the 1980s. I cherish the memories of those trips. But I knew Russian repression up close. When I was 11, my mother, a Jew, was accused of a fabricated crime. The two of us were about to emigrate. We had our exit visas. She had given up Soviet citizenship. Then the police came and the KGB got involved. My mother was sent to prison and I was left without a family. After she returned, we were homeless while the Soviet government refused to let us leave Russia until Gorbachev came to power.

The disregard for human life that I experienced as a child is central to the society that Putin wants to reconstruct as he seeks to rebuild a Russian empire. War protesters are thrown in prison. Independent media is shut down. Truth has no meaning. Black is white. Up is down. Misery abounds.

One group of my grandfather’s paintings is especially heart-wrenching to me as I look at them now. They show Ukraine 100 years ago, when he was a small child, during its compounded seven-year war — World War I, the Russian Revolution and the Russian Civil war over the years 1914 to 1921. In these works, he shows chaos, muddy roads, a child, a wounded soldier. Refugees on the move. Suddenly, it feels like nothing has changed.

We cannot remain silent or complacent. Fear has no place in the face of evil. The outcome of Putin’s war will determine the future of Europe and the United States. Ukrainians are fighting for values we all share. We must help them win this war. And later we will help them rebuild their country. We have to accept that resistance will lead to difficulties to be borne by all of us for the greater good and our global future.

Yelena Lembersky is the author of the memoir, “Like a Drop of Ink in a Downpour: Memories of Soviet Russia,” which talks about her grandfather Felix Lembersky and her family’s path out of Russia. She holds degrees in art and architecture from MIT and the University of Michigan.

Babyn Yar, Putin’s war in Ukraine, and the paintings my grandfather never got to see exhibited