In America, as in Ukraine, the unthinkable has become thinkable 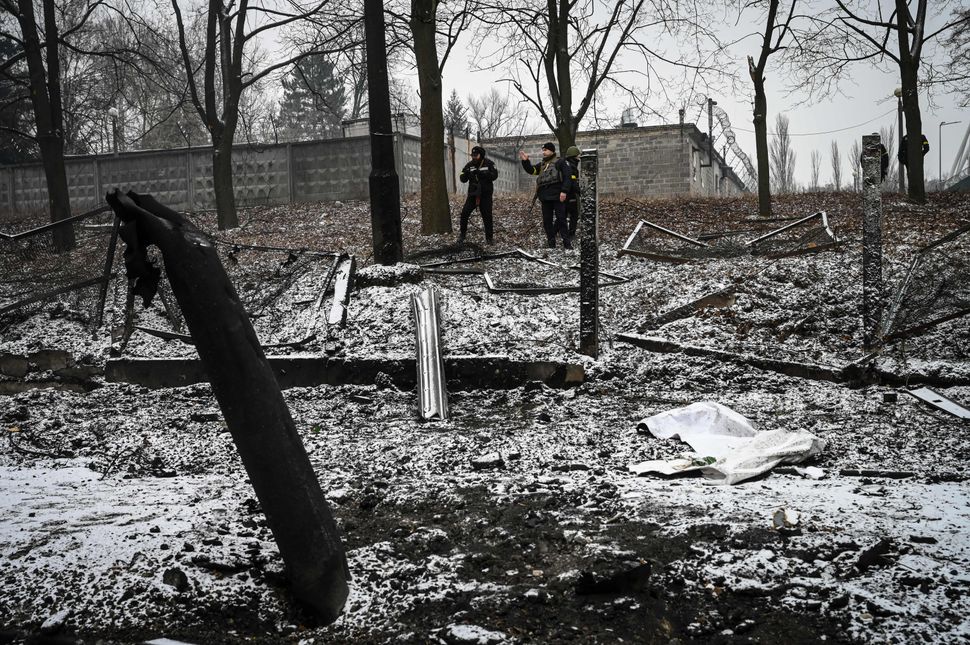 Wreckage in Ukraine By Getty Images

In his classic work “The Captive Mind,” the Polish poet and Nobel laureate Czeslaw Milosz remarks on our tendency to see the world we have always lived in as natural. The buildings on our street “seem more like rocks rising out of the earth” and the clothes we wear as we do our jobs in those buildings “are exactly what they should be.” This, we assume, is the fundamental order of things — an order we believe can never change.

Until it does, that is.

One morning, when we step onto that same street and see it “littered with glass from bomb-shattered windows,” Milosz notes that we begin to doubt the “naturalness” of our world. Those doubts deepen when we see other buildings reduced to “scaffoldings of plaster, concrete and brick,” their inhabitants now roaming those same streets in search of a loaf of bread or potatoes. After passing the third or fourth corpse on the street, what we assumed was natural turns out, quite literally, to be nonsense. The concrete turns out to be little more than convention.

As a result, Milosz writes, we find that we acquire new habits quickly. This process of re-habituation, however, occurs in different contexts. It can happen, as the catastrophic events in Ukraine reveal, under the pressure of war. A week has hardly passed since Russia’s invasion, yet more than time enough for the impossible to harden into the possible, the unthinkable to cede to the thinkable, and the unspeakable to become spoken about over coffee.

From activities like Ukrainians going to work and playing at a park in Kyiv to sheltering from cluster bombs and cruise missiles, they and we are relearning what is possible in 21st century Europe. From turning on a desk lamp thanks to electricity supplied by the nuclear reactor in Zaporizhzhia to turning a machine gun on those running the reactor, they and we are reconsidering our belief in the unthinkable. From a trickling of Ukrainian refugees to the establishing of “humanitarian corridors” — so disturbing a juxtaposition of words — to accommodate the exodus of millions of Ukrainians, all of us must redefine what is natural in 21st century Europe.

Which of these worlds, Milosz asks, is natural? The world before war or the world during war? “Both are natural,” he replies, “if both are within the realm of one’s experience.” Yet the same can be said about worlds, say, both before and during the pandemic. Or, for that matter, the worlds before and during the politics of not just the pandemic, but of the past half-dozen years in our country.

Milosz had spent the war years in Warsaw. This experience, he explained in the preface to “The Captive Mind,” gave him a direct knowledge of “the crimes which Europe has witnessed in the 20th century.” These were the war crimes and genocidal crimes committed by Nazi Germany, of course. But Milosz also meant the crimes committed by Soviet Russia and its puppet regimes against its own citizens before, during and after the war.

They revealed, Milosz affirmed, the sheer plasticity of human beings. So plastic, he declared, “that one can even conceive of the day when a thoroughly self-respecting citizen will crawl about on all fours, sporting a tail of brightly colored feathers as a sign of conformity to the order he lives in.”

It is for this reason, Milosz observed, that East Europeans could not take Americans seriously. Having never undergone what they underwent — and are again undergoing — Americans were cursed with an “appalling” lack of imagination, which made us assume that any order other than the one we had known “cannot last because it is incompatible with human nature.”

But Milosz wrote those words in the mid-20th century. If he were still alive in the early 21st century, would he still insist upon this claim? While they are of a lesser magnitude than the events in Ukraine, recent events in the United States suggest that he might not. Before news from Ukraine pushed all other news to the margins of our media and minds, we were learning that “natural” is not what it was cracked up to be.

And yet, to this very day, polls reveal that most Republicans believe that the election was rigged. And yet, the House committee investigating the events of January 6, 2021, has gathered damning evidence that Donald Trump did try to overturn the election. And yet, most Republican representatives will neither disavow the events of January 6 nor disavow their president. Some have gone so far as to describe those events as “legitimate political discourse.” What else can we conclude than that they might as well be crawling about on all fours, sporting tails of brightly colored feathers?

For Milosz, Americans seemed to believe that they would never “know the fire, hunger and sword” that Europeans have known. But this belief, he concluded, was misplaced. “It is hard to believe that when one half of the world is living through terrible disasters, the other half can continue a 19th century mode of life, learning about the distress of its distant fellowmen only from movies and newspapers.” Apart from adding the Internet to his warning, Milosz’s words have not lost an iota of relevance for all of us today.

In America, as in Ukraine, the unthinkable has become thinkable