In Zelenskyy’s Mordechai-like Purim plea, Biden is as uneasy as Esther 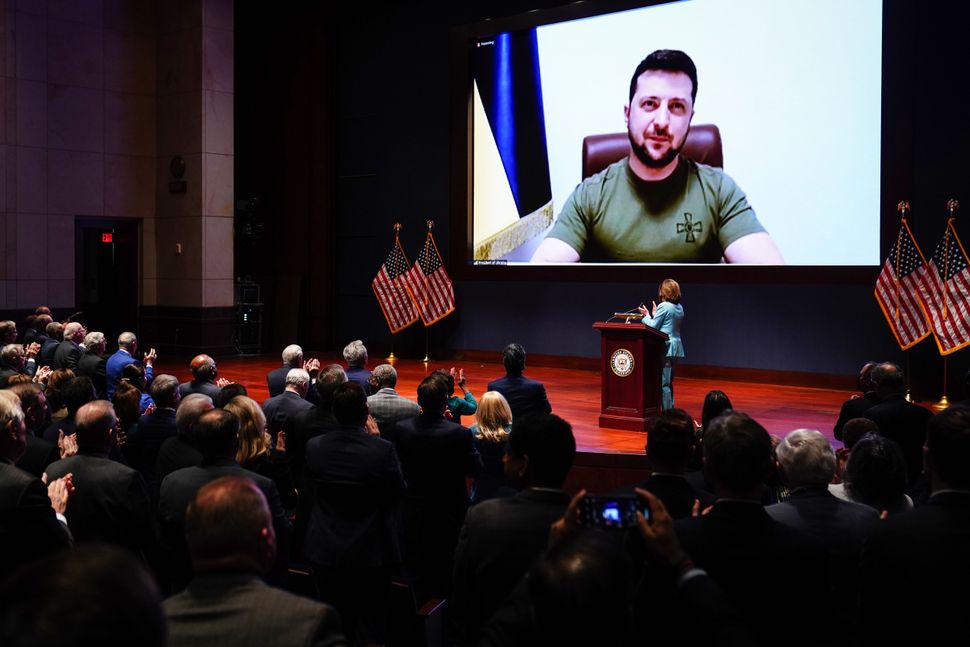 Centuries ago, in a story we tell each year on this night, a plea was made to someone with access to power, but who faced no small risk.

“Do not imagine that you, of all the Jews, will escape with your life by being in the king’s palace,” Mordechai, a Jew living in Persia told his foster daughter, Queen Esther, in the hopes of thwarting a genocidal plot. “On the contrary, if you keep silent in this crisis, relief and deliverance will come to the Jews from another quarter, while you and your father’s house will perish. And who knows, perhaps you have attained to royal position for just such a crisis.”

These words, urging action, rejecting the premise that those with status are safe from evil, echoed today in the U.S. Capitol. Ukraine’s President Volodymyr Zelenskyy, asking members of Congress and President Biden to implement a no-fly zone over Ukraine and further sanctions on Russia, spoke mostly in Ukrainian, but ended his address – after a heartbreaking video showing the toll of Russian aggression – in English.

“Peace in your country doesn’t depend anymore only on you and your people,” Zelenskyy said. “It depends on those next to you and those who are strong. Strong doesn’t mean big, strong is brave and ready to fight for the life of his citizens and citizens of the world.”

These are lessons that will surely feature in many a Purim sermon. They are the lessons of the holiday – how one can use her privilege, however modest, to speak up for others.

It’s strange to liken President Biden to Esther – although certain Trump surrogates have compared his predecessor favorably to the Jewish heroine. But in the realm of geopolitics, Biden is not the King of Persia in this instance, risking nothing to reverse a decree stamped with his own signet. Something like a no-fly zone is a monumental move, and one the White House fears might prompt America’s entry into a war with Russia. While Biden may not be at the mercy of Ahasuerus’ scepter, he has to think carefully about how involved the U.S. can afford to be acting against an autocrat with the world’s largest nuclear arsenal.

The better parallel in this instance is the bereft Zelenskyy, sporting a beard and wearing a green T-shirt, which for a modern head of state might as well be Mordechai’s sackcloth and ashes. He said he saw “no sense in life if it cannot stop the deaths.” Elsewhere, he has evinced an Esther-like attitude to his own life. Where she said “If I am to perish, I shall perish,” in an earlier appeal to U.S. legislators he said, matter-of-factly “This may be the last time you see me alive.”

Speaking on behalf of his people on Wednesday, Zelenskyy feared nothing in his request “for human rights, for freedom, the right to live decently and to die when your time comes, and not when it’s wanted by someone else, by your neighbor.”

These are the same things Mordechai asked for when he told Esther that silence could spell danger. But there is a difference in rhetoric.

In Zelenskyy’s address, there is no hope of “relief and deliverance” from elsewhere. While Mordechai teased an improbable rescue, Zelenskyy’s ask puts everything on Biden’s shoulders as the “president of peace,” while demanding a measure that would be potentially calamitous. As in the Purim story, when unnecessary additional casualties enter the picture in Chapter 9, there is a likely problematic outcome to Zelenskyy’s request. But the message has a purity.

“Today the American people are helping not just Ukraine but the world to keep the planet alive,” Zelenskyy said, “to keep justice in history.”

The Hamans and Putins of the world must be challenged and their aggression checked. The Purim story teaches this, that history’s arc bends towards justice. But this isn’t Shushan, Biden is not Esther or Ahasuerus. While the villains of history often act like those in our stories, their undoing is rarely so simple or neat.

Zelenskyy may have played Mordechai today, but it may not be enough to save his people.

In Zelenskyy’s Mordechai-like Purim plea, Biden is as uneasy as Esther