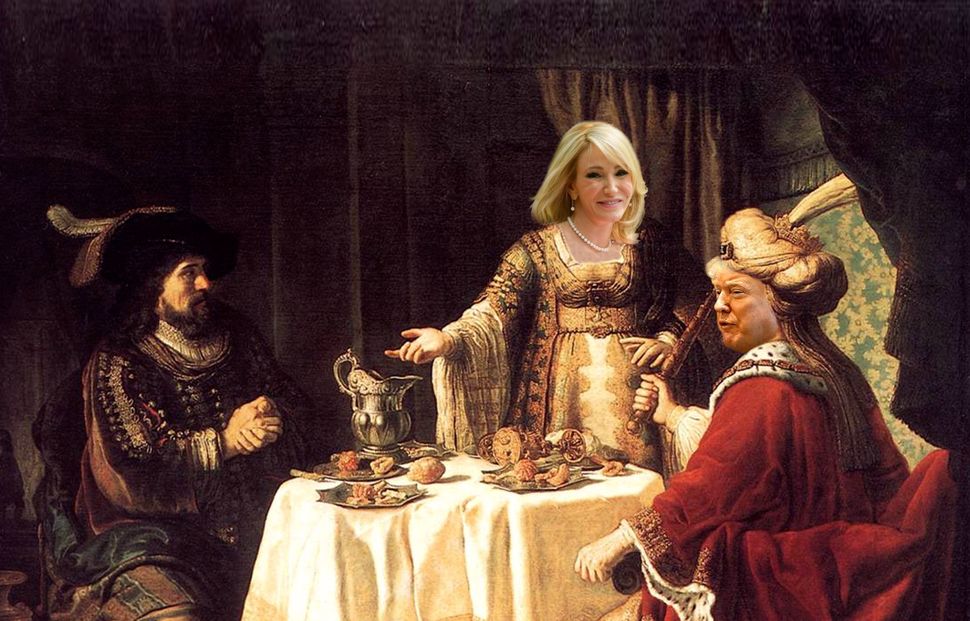 Donald Trump is a modern American man, one of the most powerful people in the world, thrice married and not known for his meekness. The heroine of the Purim story, Esther, was an orphaned Jewess from ancient Persia plucked out of obscurity to be queen, remembered for her courage to speak truth to power.

Hardly anyone could think the two are alike in any way — except Paula White, Trump’s favorite pastor, and her fellow evangelicals. In August of last year, a week after the riots in Charlottesville, Virginia, White compared Trump to Esther on “The Jim Bakker Show,” a popular weekday evangelical broadcast. Trump, she said, was “raised up by God,” and God was “raising up Esthers… for such a time as this.”

Jews read the Book of Esther every year during the festival of Purim, which began Wednesday evening. It’s a relatively minor holiday, but the story has an outsize significance for evangelicals, and White in particular. White sees it as proof that God can reward you while you’re still on earth. Other pastors mine it for the potent, prophetic language that reflects evangelicals’ sense of mission. And their love of Esther — a highly sexualized character who lived in a world of obvious sinfulness — can even help provide an answer as to why they overwhelmingly came to support Trump. She is a flawed heroine who fulfills a holy destiny; they believe he will do the same.

“Esther is this great example of [evangelicals] overlooking the obvious moral failings to the point where they don’t even register,” said Samuel Perry, a professor of sociology at the University of Oklahoma who studies Protestant Christianity. “She’s fighting for Israel, so you just claim her as this noble character, just as evangelicals have done with Trump.”

Each year at Purim, Jews read the Book of Esther with much fanfare, and with waving of the noisemakers called “groggers” to drown out the villain’s name. The story is famously salacious and gruesome — so much so that, at some Jewish schools, it is taught in full to only teenage students. King Ahasuerus sleeps with thousands of pubescent virgins before picking Esther to be his queen. The villain Haman and his whole family eventually get impaled on 75-foot poles, apparently in the favored manner of ancient Persian monarchs.

Despite its R-rated content, Esther’s story is popular among evangelicals, who make up roughly a quarter of Americans. The story they tell, however, is a little different from the fourth-century BCE text. Matthew Crouch, a televangelist, co-produced a movie about her story in 2006, called “One Night With The King.” In the movie’s telling, Esther brings a scroll to her evening liaison with Ahasuerus and reads a biblical love story to him. The movie was based on a Christian novel published by Bethany House. A Texas pastor, Beth Moore, based a popular Bible study curriculum off the Book of Esther.

“It’s no exaggeration to say that every evangelical pastor in America has preached about the story of Esther and preached from the book,” said Johnnie Moore, White’s publicist. (Beth Moore and Johnnie Moore are not related.)

Evangelical pastors cherish two fragments from the Book of Esther in particular: “… for such a time as this” and, “If I perish, I perish.” Both come from the part of the story when Esther’s uncle Mordechai convinces her of her task: to persuade the king to stop a genocide of the Jews. The phrases, frequently quoted without context, evoke the feeling shared by many evangelicals that ours is a time of earth-shattering change.

“Whatever the denomination or style of preaching, or ethnicity, or conservative or progressive, those two phrases have often served as a sort of a hinge on which prophetic messages have swung,” said Moore, who is also a pastor.

According to Curtis J. Evans, an associate professor of religious history at the University of Chicago who writes about the Christian right, White’s use of “for such a time as this” makes sense when evangelicals flip the script a bit and compare Trump to the more obvious figure in the story: the king, a sinner saved by Esther when she brings him the word of God.

“[I]t seems a way of justifying how evangelicals have made their peace with an unsavory and morally compromised figure like Donald Trump,” Evans wrote in an email.

Paula White, a Florida-based “prosperity preacher,” also draws on the story, in another part of her ministry: To promise her parishioners financial reward from God while still on earth. Like Joel Osteen and Jim Bakker, she solicits large “seed” donations from her followers — sometimes as much as an entire month’s salary. She says donations are meant to “get God’s attention,” and will eventually lead to a large “harvest” of wealth.

The simplified version of Esther’s journey — she risks her life for her people and is rewarded with a queenly crown — provides a good model for such a promise, according to Samuel Perry. A better model, at any rate, than New Testament characters like Mary Magdalene or the Apostles, who suffer greatly for their faith.

“‘Health and wealth’ prosperity preachers like Paula White love the Old Testament because it seems to be very clear: If you trust God, he’s going to bless you,” Perry said. “And therefore you should stick your neck out like Esther did.”

White told the Forward that she has been teaching the Book of Esther since the ’90s, when she discovered that Esther’s journey “out of great brokenness” resonated with her congregants. She said that her church has classes about the story where they explore the book in detail.

“She is a strong female leader who never loses her femininity,” White wrote in an email. “She is beautiful and powerful, but most importantly, she is faithful. She understands God’s order and ways and walks with God. She is the epitome of a woman of God.”

In her August 2017 appearance on “The Jim Bakker Show,” White seemed to have stuck to the more common, prophetic use of Esther’s story. At the close of her sermon, she rallied the crowd with words that hit on the very essence — according to evangelicals — of Esther’s story: spreading the word of God and preparing for revelation.