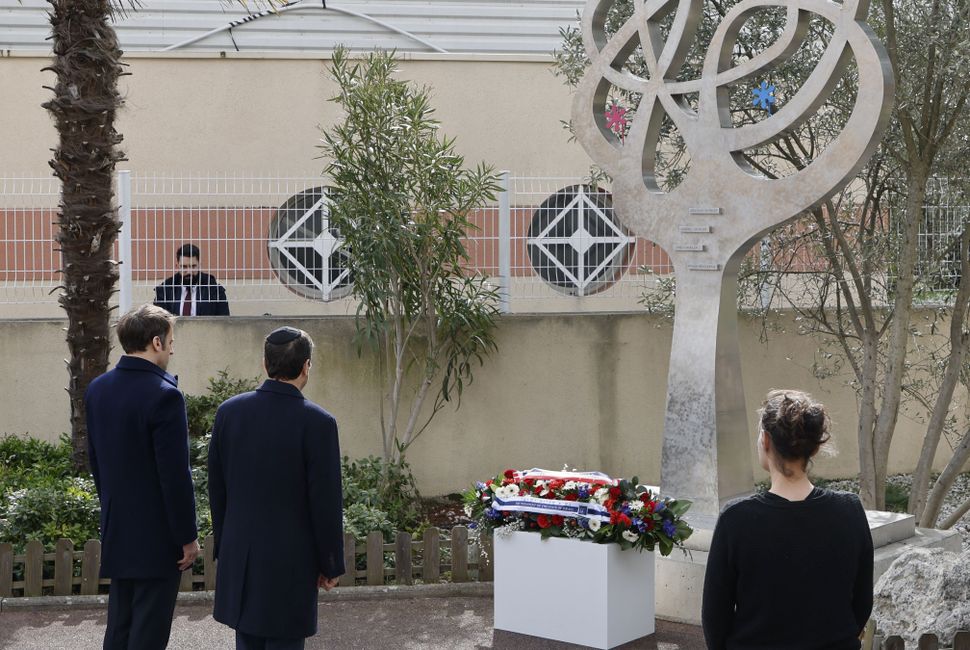 Ten Years Later: France’s President Emmanuel Macron (L) and Israel’s President Isaac Herzog (C) stand in front of a wreath laid at the Tree of life at the Ohr Torah secondary and high school in Toulouse, southern France, on March 20, 2022, during a ceremony to commemorate the tenth anniversary of the attacks perpetrated by Mohamed Merah which killed seven people in 2012. - By Getty Images

With these four words, French president Emmanuel Macron began a speech yesterday in the southern city of Toulouse. Using a biblical cadence, over the course of his speech, Macron repeated these four words, which formed a leitmotif, one that announced both a matter of fact and a fact that will always matter. Yet a fact that, no matter how often, will remain impossible to fully comprehend.

It was 10 years ago in Toulouse that an Islamist terrorist, perched on a motor scooter, parked at the entrance of the Jewish school Ozar-Hatorah. Wielding a pistol, the terrorist proceeded to kill Jonathan Sandler, a teacher at the school, along with his six-year-old son Arié. He then pursued Arié’s three-year-old brother, Gabriel, into the courtyard and shot him dead. Catching sight of another student, eight-year-old Myriam Monsonégo, the terrorist also shot her dead.

Ten years later, those who spoke at the commemoration in Toulouse confronted an impossible challenge. How can we, in the words of French survivor of the Holocaust, Charlotte Delbo, expliquer l’inexpliquable? Explain the inexplicable. Or, failing that, how can we describe the indescribable? In her book “Auschwitz and After,” Delbo inscribes her own leitmotif: “We must show it as it was.” Time and again, after portraying acts of shattering inhumanity in simple and searing language, she insists: “Try to look. Just try and see.”

Samuel Sandler, the father of Jonathan Sandler and grandfather of Arié and Gabriel Sandler, cannot stop looking back at the events 10 years ago. “The time passes, but the dates remain fixed in my mind,” he recently remarked. A retired aerospace engineer, Sandler now visits schools to speak about antisemitism — doing so, he says, gives him a reason to live.

“I’ll never again see the names Jonathan, Arié and Gabriel light up on my smartphone,” Sandler said. “But I can at least speak of them when, with these students, I discuss what happened to them.”

At Sunday’s commemoration, however, Sandler struggled to speak about his son and grandsons. He addressed a silent auditorium filled with both political figures — Israel’s president Isaac Herzog, France’s former presidents Nicolas Sarkozy and François Hollande, the former prime minister Manuel Valls, as well as staff and students from Ozar-Hatorah and members of the stricken families. But what could he ask them to try and see? Since the murder of his child and grandchildren, he confessed, “I live as if anesthetized, like a ghost. Their absence haunts me.” 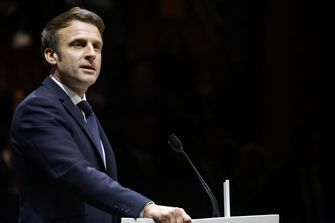 We try to bear the unbearable with words. We seek to understand the reasons for the unbearable event, perhaps even seek to prevent such unbearable events from ever again happening. This was one of Macron’s aims in his speech — a speech, it happens, given just three weeks from the first round of the presidential election. Macron emphasized all that his government had done to tackle the rise of antisemitism, “including the kind that hides behind the mask of anti-Zionism,” as well as combat terrorism both within and outside France.

This is no small matter at any time; it is an especially sensitive matter when over half of French voters believe that none of the presidential candidates has adequately addressed the threat of radical Islamism in France.

Indirectly, the president also rebuked one of his opponents, Éric Zemmour, the racist media pundit who has recently also become an apologist for Vichy France. Macron praised the “decency” of Samuel Sandler’s civil response, in the pages of the newspaper Le Monde, to Zemmour’s outrageous claim that, by burying his offspring in Israel, Sandler had turned his slain family members into foreigners by “not choosing France.”

Equally important, Macron also recalled that the terrorist made life unbearable not just for the Sandler family, but also for the families of Imad Ibn Ziaten, Mohamed Fared Legouad and Abel Chennouf. These young men, members of France’s 17th Paratrooper Regiment stationed in Toulouse, were also murdered by the terrorist because, in his words, they were “western infidels.”

Sitting in the auditorium was Imad Ibn Ziaten’s mother, Latifa Ibn Ziaten who, like Samuel Sandler, has visited countless schools since her son’s murder. Despite her defense of France and its republican ideals, Madame Ibn Ziaten also confesses her despair over the government’s lack of attention given to the death of her son.

In her remarkable book “Reading the Holocaust,” Inga Clendinnen reflects on the moral imperative this event imposes on us. “These things were done — some survived to tell what had been done. We, to whom such things have not been done, have an obligation to be attentive.”

Macron found the right words, but we must attend most carefully to the words spoken by the surviving family member. This will not prevent such things from being done to others. Still, it might prevent the realization of Elie Wiesel’s warning that if we forget, the dead will be killed a second time.