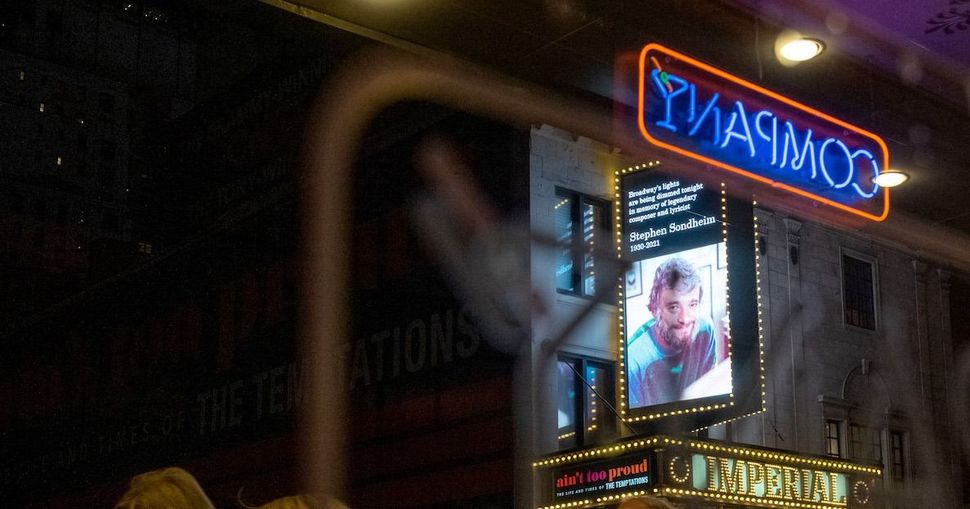 A marquee sign pays tribute to Stephen Sondheim ahead of the marquee lights dimming on December 08, 2021 in New York City in honor of Sondheim, who died on November 26, 2021 at the age of 91. By Alexi Rosenfeld/Getty Images

The night that Stephen Sondheim died, I went out for drinks with a new friend. We played “Never Have I Ever,” a game I hadn’t even thought of since college, and I very slowly nursed a cocktail called, romantically, the Hundred-Year-Old Dream. We stayed out for hours.

Sondheim was a master of human connection. He had the rare gift of seeing the invisible threads in any relationship — the careful, sometimes violent balance of push and pull — and the rarer gift of being able to make others see them, too. I sat across from my friend, and thought, in the quiet moments, about how remarkable it was to meet someone and have fun with them — to have that fragile balance, even for a moment, work. What makes it possible? How, with all of our absolute oddities as humans, do we ever find our way to knowing one another?

Today would have been Sondheim’s 92nd birthday — a life of not quite 100 years, most of them spent crafting dreams. In the months since his passing, I’ve wondered, occasionally, about what he might have written about our present moment if he had lived to see it. After two years, the pandemic’s patterns — a wave comes, and we isolate; it retreats, and we venture out; repeat — have created a kind of perpetual disruption. There has yet to come a moment when it feels entirely possible to develop a new way of being in the world, new habits, new friendships, a new concept of self. It is all reaching, and being cut off, and waiting, and reaching again.

It is exactly the kind of moment of suspended possibility that it’s possible to imagine Sondheim not just clarifying, but reveling in. What would he have made of the way we connect to each other now? What would he have seen that the rest of us are likely to miss?

“Never Have I Ever,” at least as I’ve played it, works like this: You say something you’ve never done, and, depending on your age group, everyone playing who has done the thing in question either claps or takes a drink. It’s a remarkably efficient way of getting to know someone, because it teaches you their limits — or, more accurately, the limits that they are capable of recognizing in themselves, which is in some ways more interesting. (It’s also efficient because, if you are a drinking adult, it loosens you up fairly quickly.)

Theatrical audiences play some version of this game with every character they meet. If you are seeking dramatic tension, look first to what a character simply won’t do. King Lear won’t surrender the trappings of kingship, even though he’s no longer interested in acting as a king. Hamlet, for so many acts, won’t kill his traitorous uncle even though he wants and possibly needs to. Eliza Doolittle won’t subsume her exuberant wildness to the demands of properly enunciated English. Etcetera.

Sondheim was among the very best at giving life to the curiosities of human limitations, those that we knowingly impose on ourselves and those of which we are, too often, miserably ignorant.

See one of the funniest songs he ever wrote: “Agony” from “Into the Woods.” In it, two princes lament the great mutual impediment they see in their lives, namely, the seemingly insurmountable obstacles between them and the women they claim to love. As they do, they unwittingly reveal that the real barrier to their happiness is that they’re ego-blinded monomaniacs who simply won’t, or can’t, conceive of wanting something they don’t need to conquer. After first bonding over their romantic torment, the two quickly turn to competition, each trying to prove to the other that his love is more thwarted. By the song’s end, they’ve convinced themselves, and each other, that they’re two singularly compelling tragic heroes, while merely convincing the audience that they’re singularly tremendous narcissists.

To them, the story is that they have never, ever (yet) won over the women they love. To us, it’s that they will never, ever be capable of being content with that victory, if and when it comes.

That song finds an interesting, darker parallel in “Unworthy of Your Love,” from “Assassins,” an enticingly trippy show about the people who have aspired to kill American presidents. The song is a duet between John Hinckley Jr., who tried to assassinate Ronald Reagan, and Squeaky Fromme, who tried to take a shot at Gerald Ford, about their furious, unrequited love for elusive idols — for Hinckley, the actress Jodie Foster, and for Fromme, Charles Manson.

The princes of “Agony” see the distance between them and their wished-for princesses as evidence of their own greatness. To be frustrated in the noble pursuit of ideal love is to become, in their eyes, even more perfect. Hinckley and Fromme see that same distance as confirmation of their lowliness, in its own way a form of great egotism — the lower their start, the more extraordinarily lovable they’ll become when they finally distinguish themselves (by killing a president).

What they think they won’t do: ever be worthy of the love of, respectively, a Hollywood starlet and a crazed serial killer. What they actually won’t do: consider the possibility that simply being human is enough, and any love that seems to demand more is surely unwise, and probably dangerous.

“Unworthy of Your Love” and “Agony” are, in some ways, extreme examples. We all cherish certain delusions, but few of us, mercifully, with quite as much commitment as Hinckley, Fromme and the princes. Sondheim was just as adept at investigating the obvious and hidden obstacles in the lives of perfectly ordinary people. See “Company,” one of the most challenging, complicated musicals he wrote. One of the first things we learn about Bobby, the protagonist, is that he — or she, Bobbie, as in the gender-swapped revival currently playing on Broadway — has never, ever been married, or even really considered the possibility.

It’s a limit that sets up the rest of the musical. Will Bobby — we’ll stay with Sondheim’s original name for the character, to avoid confusion — stay on the side of “never, ever,” or change, and what will, as he puts it, “these good and crazy people, my friends” make of that eventual choice? Will they understand him the better for it, or find it incomprehensible? Does coming to know yourself better bring you closer to the people you love, or force you further apart?

“Company” has an odd, looping plot structure centered on Bobby’s birthday — 30 in the original, 35 in the revival — an event marked by a raucous, claustrophobia-inducing party that replays throughout the show. Bobby returns and returns to the event.

When I saw the revival on Broadway last month, I found the kind of eddying obsessiveness of its structure uncomfortably close. Isn’t this the social pattern the pandemic has imposed on so many of us — circling around the question of what we want our lives and our relationships to look like, venturing out and retreating, not yet able to commit to a real choice? If Sondheim was able to realize that tension with such extraordinary deftness and humor in 1970, when the musical premiered, what kind of perspective would he bring to this moment in which Bobby’s delightful, tortured approach to not-quite-living has become so very much the norm?

At the bar that November night, I thought a bit about the girl I had been when I last played “Never Have I Ever.” I was just at the start of my 20s, and the things I hadn’t done seemed more like things I hadn’t done yet. At 29, after two years of stalling and not quite starting, they seem to tell me more about who I actually am than who I might become. When does “haven’t” become “won’t?” Does a character ever solidify, and is it possible to really know when it does? How does it happen, where is the moment?

It’s Sondheim’s birthday, and we must celebrate him, but it’s the first we’ve marked without him, and I can’t help but continue to mourn. It would have been wonderful if he could have stayed a little longer, and wonderful — so wonderful — to see how he might compose a way into understanding more about the new boundaries in our lives. Never have I ever wished for his art as much as now.