Does Goliath deserve his bad reputation? A new spin on an old villain 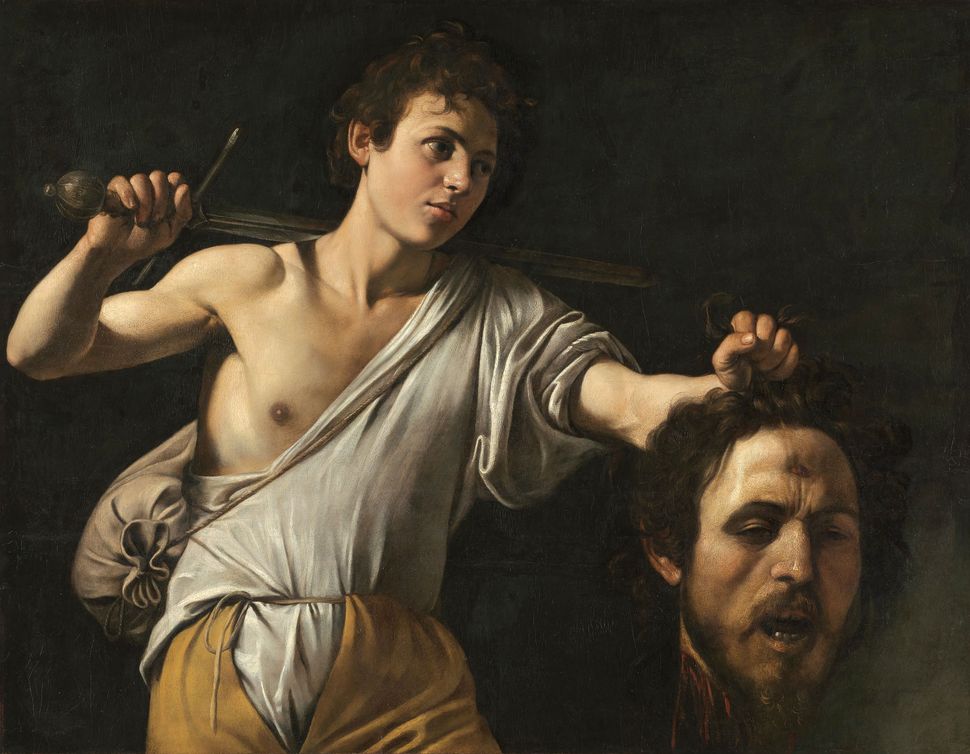 ‘David with the Head of Goliath,’ by Caravaggio By Getty Images

Does Goliath, the giant notorious for his biblical confrontation with David, deserve sympathy? The latest book by Jonathan Friedmann, professor of Jewish music history at the Academy for Jewish Religion California, explains why he may be getting some. “Goliath as Gentle Giant” examines the recent phenomenon of humanizing depictions in popular culture of David’s opponent. Friedmann’s previous books include studies of the social functions of synagogue song; music in the Hebrew Bible; and the Jewish liturgical composer Jacob Sonderling. Friedmann recently spoke with Benjamin Ivry about whether belated celebrity damage control is possible for Goliath.

Benjamin Ivry: People from Philistia, where Goliath hailed from, as described in the Books of Samuel and Joshua, appear to have an image problem. Archaeologist Lawrence Stager has noted that they are “defined mostly by their enemies” as hostile to culture and the arts, but were “cosmopolitan people who traded widely across the eastern Mediterranean.” Another archaeologist, Seymour Gitin concurs that the “Philistines were not philistines in the sense we define the word today.” Should Goliath and his brethren be renamed Philistians or people from Philistia, rather than the potentially misleading Philistines?

Jonathan Friedmann: You know that’s really interesting and you’re absolutely right. I think [Israeli archaeologist] Israel Finkelstein said when you look at the Philistines, there’s nothing philistine about them. Their civilization was more prosperous and far-reaching than the Israelites.

Why does the Bible describe Israelites as constantly clashing with troops from Philistia? Researchers today declare that little archaeological evidence suggests that they posed any real threat to the Israelites; they were more concerned with regional superpowers like Egypt, Assyria and Babylonia. Was Philistia as opponent of the Israelites just a literary convention?

The ongoing war surrounding the meeting of David and Goliath is very far-fetched from a historical or archaeological perspective. It’s more about a minority culture, with the Israelites being less sophisticated, a less powerful hill people. In large part, the Israelites were worried about Greek hegemony at that point. Goliath is basically described as a Greek soldier, so it’s a polemical text. It’s a revenge fantasy, with the Israelites trying to build themselves up in their own literature to give themselves strength, power, and superiority that they didn’t have in real life. It Ain’t Necessarily So: By Getty Images

Around 40 years ago, the endocrinologists David and Pauline Rabin wrote a note to the New England Journal of Medicine, speculating that Goliath may have had hormonal problems. Moshe Feinsod, a neurosurgeon from Haifa, published an article following what he called the Rabins’ “humoristic twist” in diagnosing a pancreatic tumor in Goliath. How did the subject of Goliath’s possible health problems develop from doctors aware of the absurdity of such distant diagnoses to a self-help guru like Malcolm Gladwell who seriously identified with the ailing Goliath, saying that underdogs like David should never win?

There’s a bit of silly undercurrent even when we speak of the story of David in a serious medical way. But it’s helpful in that there are lots of aspects of Goliath that don’t make much sense unless he’s considered as an ailing or failing champion. He doesn’t see well, and his shield bearer is like his seeing eye guide. What ultimately happens is that Goliath starts to be seen as the underdog himself, compared to David.

The 1984 novel by Joseph Heller, “God Knows” contains a deathbed kvetch by King David about his misdeeds. Heller depicts David as a narcissistic fashionista who regrets his celebrity. To make Goliath appear more likeable, is it necessary to show David as frankly unpleasant?

The Bible tries to portray the innocent time of David, doubling down on his purity, virtuousness, and naivety, but Heller basically says David was always David, and creates a more complicated picture. In the beginning of “God Knows,” David claims to despise the Book of Chronicles because it whitewashes all the fun stuff. In the Davidic story, he’s a murderer and a scheming political animal, he’s an adulterer and a bit paranoid, a very well-rounded and tormented character. But not in Chronicles and certainly not in rabbinical literature.

Biblical scholars explain that in 1 Samuel 17, the traditional account of David vanquishing Goliath is given, but in 2 Samuel 21 the killer of Goliath is named as Elhanan. son of Jaare-Oregim the Bethlehemite. Supposedly Elhanan’s feat was later ascribed to David, because the latter became more famous, so he lent prestige to the achievement. Can David be dissociated from this victory, or is it too late for any such revision?

It’s rather remarkable. The Biblical world was much more comfortable with competing stories and retelling stories and adding details because it was much closer to an oral tradition. A lot of discrepancies can be explained by looking at Elhanan as the original story, of a heroic person who slayed a giant, a typical folklore theme. And David’s name was tacked onto this, which is the general historian’s consensus.

The Babylonian Talmud (Sotah 42b) describes Goliath as son of the sister-in-law of David’s great-grandmother. “Ruth Rabbah,” part of the Midrash Rabbot as a commentary on the Book of Ruth, says that Goliath and David were even more closely related. Was the David-Goliath fight just a family squabble? Or should we follow the Jerusalem Talmud, in which Rabbi Yohanan claimed that Goliath was the son of “one hundred fathers and one old maid” due to his mother’s promiscuity, possibly leading to more compassion for him today?

In my view, the Midrashim regarding Goliath, and the storytelling in Christianity which builds Goliath into Satan against Jesus, just doubles down on the depravity and despicableness of Goliath. There’s no sympathy for him; that’s not the purpose of those texts. When you look at the way Jacob and Esau are treated in the Talmud, typically black and white oppositions are described within the same family.

Emil Hirsch’s article on Goliath in the “Jewish Encyclopaedia” enthuses about the David-Goliath matchup: “From the point of view of literary effectiveness, few portions of Old Testament literature equal this.” Does this artistic impact, plus the fact that we know nothing else about Goliath as a character, mean that speculations, reimaginings, and rehabilitations will surely continue about him in future?

I do want to stress that looking at Goliath positively is very rare. There aren’t that many kind treatments of Goliath. But it’s a very bare-boned story. I don’t know how it would stack up against other pieces of literature, so [Hirsch’s] praise may be hyperbole. But from my perspective, this story lends itself well to the Sunday school crowd, with David being the Sunday school student against any obstacle. So many of us learn this story as children; that’s what makes it powerful. We automatically know what it means when we say David and Goliath. I don’t know if the story itself is so great, but it’s an easy one to sell. David is really a complex character. A lot of what he does is not something you’d want to expose a Sunday school student to, but the battle with Goliath is sometimes called a perfect boy’s tale, tailor made for the Boy Scouts and all that stuff.

Does Goliath deserve his bad reputation? A new spin on an old villain