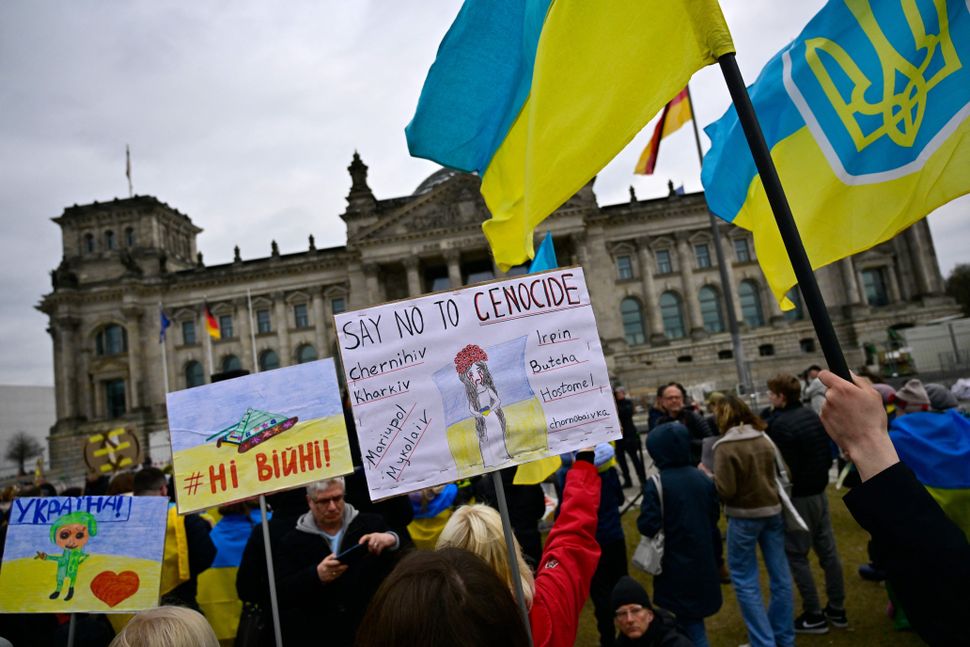 Protest in Berlin: A participant displays a placard reading ‘Say no to genocide’ during a protest of pro-Ukrainian activists in front of the Reichstag building housing the Bundestag lower house of parliament in Berlin on April 6, 2022, where a debate focusing on civilians found dead in the Ukrainian town of Bucha took place. By Getty Images

The horrors produced by Russian soldiers in Bucha and Borodyanka have spurred countless commentaries on two concepts: crimes against humanity and the crime of genocide. Commentators rightly note that these notions differ not on the heinous nature of certain acts, but on how they should be defined. But often missing from these discussions is the historical context, which, in crucial respects, shaped both concepts — a context as ironic as it is tragic.

Think of it as two tales of one city.

The western Ukrainian city of Lviv has, for now, been spared Russia’s indiscriminate air and artillery strikes. But the city has not been spared history, having known nearly as many rulers — and as many names, from the German Lemberg and Polish Lvov to Ukrainian Lviv — as the many nationalities it harbored.

Founded in the mid-17th century, Jan Kazimierz University numbered among the city’s cultural jewels. Shortly after World War I, when Lemberg became Lvov upon the collapse of the Austro-Hungarian Empire and the creation of an independent Poland, the university’s famed law school enrolled two young men, Hersh Lauterpacht and Raphael Lemkin. Remarkably, Lauterpacht and Lemkin would become two of the century’s most influential theorists in international law.

No less remarkably, the only biography of Lauterpacht is written by his son Elihu Lauterpacht, a distinguished British jurist. Lemkin has gotten more attention, though only of late, yet his biographers all heavily depend on his autobiography, “Totally Unofficial.” Nevertheless, their lives reveal striking affinities.

Both were unobservant Jews, yet keenly observant of the fates of religious and ethnic minorities in the redrawn map of Europe; fluent in several languages, both sought to frame the rights that all peoples, regardless of their language, shared as human beings; deeply cosmopolitan individuals, both were always held by the gravitational pull of their provincial pasts. And as for those pasts, both were punctuated by pogroms in both the countryside and cities.

Soon after Lemkin arrived at the university in 1921 — Lauterpacht had left two years earlier — a former Turkish minister, Mehmed Talaat, was shot dead on a street in Berlin. His assassin, Soghomon Tehlirian, was avenging his family, as well as more than one million fellow Armenians, who had been murdered by the Turkish government during the war. The Allies, who had sentenced Talaat to death in absentia, sought Talaat’s extradition, but Germany refused the requests. As for Tehlirian, he had been arrested by German authorities and awaited trial for murder.

Lemkin found the paradoxical nature of these crimes and punishments as both morally and legally troubling. In an exchange with one of his law professors, he asked why the Armenians could not try Talaat for the massacre.

“Consider the case of a farmer who owns a flock of chickens,” the professor replied. “He kills them and this is his business. If you interfere, you are trespassing.” Blurting that the victims were not chickens, Lemkin asked, “It is a crime for Tehlirian to kill a man, but it is not a crime for his oppressor to kill more than a million men?”

Lemkin’s effort to answer that question eventually led to his coining of a term for a crime, which, until then, did not have an adequate name. The term had to both capture our attention and convince us that something new and awful had exploded into our world, something that entailed “a coordinated plan of different actions aiming at the destruction of essential foundations of the life of national groups, with the aim of annihilating the groups themselves.”

To give a name to the crime, this man of many languages fused the Greek derivative geno, meaning “race” or “tribe,” to cide, the Latin derivative for “kill. This unexpected joining of these words gave the world the word for the unholiest of acts: genocide. Lemkin settled on this word while the Nazis were launching the Final Solution. This was of more than academic interest to Lemkin. Though he had, by then, made his way to the United States, the lives of nearly his entire family, as with Lauterpacht’s, were extinguished in what the historian Timothy Snyder has memorably described as the “bloodlands.”

Though Lemkin did not mean for the term genocide to be exclusively used to categorize the Nazi project to eliminate Jews from the world, it became forever intertwined with this effort. This was, as historians like Samantha Power point out, a tragic confusion. Lemkin’s aim was to prevent such atrocities from ever reaching the point where a state has the time and means to build state of the art death factories. And yet, as Power writes, the link between genocide and Auschwitz “would cause endless confusion for policymakers and ordinary people,” who assume genocide happens only when death factories are already belching the ashes of dead men, women and children towards the heavens.

This is where the perspectives of Lemkin and Lauterpacht diverge. The latter, who had settled in Great Britain in the early 1920s and would assist at the Nuremberg trials, focused on the individual victim of such crimes. Yet Lemkin, who also attended the trials (but in a vaguely defined capacity), instead insisted on the primacy of the group. In his recent book “East West Street,” the renowned international lawyer and author Philippe Sands considers the clash between these two concepts.

He writes that, whereas Lauterpacht held that people are “individual human beings and should be protected as individual human beings,” Lemkin argued that this ignores what, in fact, happened to the Armenians or Jews. When genocide occurs, people are killed not as individuals, but because they belong to a particular group. For Lauterpacht, the danger in Lemkin’s approach is that, in Sands’ phrase, it would “create the very conditions that Lemkin was trying to protect us from — namely, it would pit one group against another.”

Hence, Lauterpacht’s emphasis on “crimes against humanity,” which concerns crimes committed against individuals. Usually many, many individuals. And yet, as Sands acknowledges, Lemkin was also right: Armenians in Turkey and Jews in Europe, Tutsis in Rwanda and Muslims in Bosnia were killed en masse because, well, they were seen as nothing more than a mass. It’s as if the individual effectively dissolves in the alembic of the group — a group that another and dominant group does not wish to share the world with.

For Sands, part of whose family also hailed from Lviv, the tension between these two perspectives seems inevitable. Lauterpacht was right, in his embrace of individual rights, to reject tribalism, but Lemkin was also right, in his concept of genocide, to insist that murderous tribalism not only existed, but would flourish if the law ignored it.

This tension is more than inevitable; it is tragic. But as we try to make sense of events now unfolding in Ukraine, it also makes sense to try and hold on to both concepts. Several things are already clear, most immediately that appalling crimes have been committed by Russian soldiers and that these crimes have not troubled Vladimir Putin. It is less clear — and this is crucial — that he has either ordered or encouraged these acts with the intent of “annihilating an entire people.”

This becomes yet more problematic given Putin’s attitude towards the legitimacy of an independent Ukraine. Such a people, he insists, does not exist. Instead, it is a fiction wrought by Soviet rulers and weaponized by those he dismisses as “Nazis” who are now seeking to carve out this slice of Russian land from the underbelly of Mother Russia.

For this reason, his “special military operation” more closely resembles a crime against humanity than a genocide. The former, according to the International Criminal Court, applies to “crimes such as murder, extermination, rape, persecution and all other inhumane acts of a similar character (willfully causing great suffering, or serious injury to body or to mental or physical health), committed as part of a widespread or systematic attack directed against any civilian population, with knowledge of the attack.”

To define Putin’s action as a crime against humanity, and not a genocide, does not diminish its appalling nature. Moreover, as George Orwell would have reminded us, at a time when Putin and his apologists use language to make lies sound truthful and murder respectable, getting words right becomes more vital than ever.